Time to recycle an image from a couple of years back. Now just let that sink in a bit. Gotta love what the combination of wheat leading to visceral fat accumulation does to estrogen levels in men. 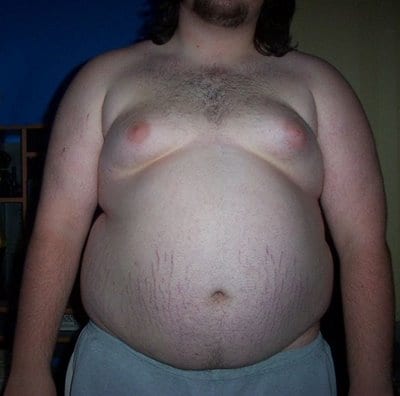 , I’ve read a few reviews and notably, one quite extensive review just posted by Dr. Michael Eades. I really liked the insight and juxtaposition of these two paragraphs:

Stephen Budiansky, author of one of my favorite books, Covenant of the Wild

, describes how domestic animals formed a pact with humans in which the animals traded a period of safety and survival for their lives. Had this covenant not been made, it is highly likely – virtually a certainty – that cows would now be extinct. Big, slow, stupid and tasty, had they not been amenable to domestication and entered into the covenant with their domesticators, cattle would have been hunted to extinction long, long ago. But they did – however unwillingly – make the covenant and so exist by the tens of millions today. The deal they cut was a phenomenal deal for cattle as a species, but not a particularly good deal for the individual cow when the time comes to pay up at slaughter.

Homo sapiens entered an almost mirror image of this same covenant when they domesticated cereal grasses.* We gave up our independence and mobility for the promise of a constant and plentiful food supply. But, as with our covenant with domestic animals, there is a catch. And this time it’s with us. Humans emerged from this deal with the short end of the stick. In the same way as did cattle, we made a good-for-humans-as-a-species/bad-for-the-individual-human trade. Like it or not, we traded the health of the individual human for the overall good of mankind and the development of civilization.

How about that? I think it’s right on the mark and makes a lot of sense.

Dr. Mike goes on to describe the diet of the ancient Egyptians: high in wheat; just the sort of diet that would be prescribed today by the USDA Food Pyramid, as well as the preponderance of dietitians and nutritionists.

Unfortunately, according to Eades, mummified remains and their artwork don’t really paint a rosy picture of dietary health: “the ancient Egyptians were often fat and were riddled with heart disease, dental caries, bad periodontal disease and no doubt diabetes and hypertension.” Sounds like modern America.

It’s also clear from this review that Dr. Eades has undergone a change in his perspective vis-a-vis a complete emphasis on carbohydrate underlying modern dietary and health problems, including obesity. This is something the Paleo folks have been talking about for a good long while, particularly in view of the healthfulness of many primitive populations with very high carbohydrate consumption — but with no wheat or other grains in their diet.

And the figures cited on grain consumption are unbelievable, but at the same time, cause me to relax a bit over having that burger with a bun now and then, or a few slices of pizza. According to figures obtained from the Kansas Wheat Commission, the average American consumes the wheat equivalent of a loaf of bread per day. Well, when you consider the breakfast cereals, the baked whatever from Starbucks as a snack, the sandwich for lunch, another afternoon snack, pasta for dinner along with bread to scoop it all up, then Hot Pockets in front of the TV at 10PM, it’s not such a stretch. Add in the unnatural omega-6 consumption from the industrial seed oils in everything, then heap on 20-30 teaspoons of sugar on all of it, and you’ve got yourself a perfect storm.

Well those are just the highlights, so I encourage you to read the whole review if you haven’t already. Also, Tom Naughton, producer, director and Fat Head behind Fat Head, The Movie,

has a thorough review up as well.

Moving on to Dr. William Davis and his book — and some of the interesting, humorous and telling things that have happened — the book sits currently at #7 in all books on Amazon and #1 in three separate health & science categories. And, and, and…it also hit #5 on the NYT Bestseller list in the Advice & How-To category.

…And this did not make the wheat & grain industry happy. So, doing what any upstanding industry would do, they unleashed the whores. Specifically, the Grain Foods Foundation. Ms. Ashley Reynolds is the one they got to hike up her skirt.

Don’t be fooled by catchy terms like “wheat belly” and “bagel butt”….a fad diet is still a fad diet, no matter how you dress it up. That’s exactly the story behind the new book Wheat Belly: Lose the Wheat, Lose the Weight, and Find Your Path Back to Health that was released today.

In his book, cardiologist William Davis asserts that wheat consumption is solely responsible for Americans’ health ills and that cutting wheat from our diets is the cure-all solution to conditions like obesity, diabetes, celiac disease and rheumatoid arthritis.

As the old saying goes, if it sounds too good to be true, it probably is. Cutting out one specific food is not only unrealistic, it’s dangerous. Omitting wheat entirely removes the essential (and disease-fighting!) nutrients it provides including fiber, antioxidants, iron and B vitamins.

Besides this, the advice dished out by Dr. Davis is completely counter to the Dietary Guidelines for Americans, the gold standard of scientifically-sound nutrition advice. The Guidelines call for the average healthy American to consume six one-ounce servings of grain foods daily, half of which should come from whole grains and the other half from enriched grains. Wheat is the basis for a number of healthful whole and enriched grain foods including breads, cereal, pasta and wheat berries that provide valuable nutrients to the American diet and have been shown to help with weight maintenance.

So, let common sense prevail. When it comes to nutrition advice, look to the real experts and remember that weight control is all about one key equation: calories in must equal calories out.

Most of that is just too vapid, too stupid, too pandering, too cutesy to even comment on. Feel free to dissect it in comments if you like. I can hardly get through the thing without laughing and losing my train of thought. Here’s Dr. Davis’ response.

What’s particularly funny about the link, above, is that there are 113 comments so far, and many, many by people who see right through Ashley Reynolds’ bullshit. Here’s a great sampling of some of them.

And who remembers my Nutrition Density Challenge: Fruit vs. Beef Liver, where it took a full 5 pounds of fruit to roughly equal the nutrition in 4 ounces of liver? How about we do one real quick like, beef liver vs. bread? Yea, because then we’ll have earned the right to refer to Ashley Reynolds as the lying, whoring abject moron that she is and c’mon, face it: that’s what you’ve been wanting me to say all along, isn’t it?

So let’s see, I’ll use bread as a surrogate for that grain equivalent of one loaf per day. Poking around various breadweb sites, looks like about 1,400 calories. So let’s compare the nutrition in 1,400 calories of beef liver with that of 1,400 calories of bread, since, you know, ‘grains contain vital nutrients and you’ll be absolutely fucked if you don’t get your six servings per day.’

And OK, since not everyone likes beef liver, we’ll do it for 1,400 calories of salmon as well.

Now, before we get started, let’s get a bead on just how ignorant this “registered dietitian” is. Says she: “calories in must equal calories out.” That’s like saying “a day must equal 24 hours.” It says nothing about how you spend your day, nor various hours within it in activities, sleeping, etc. In terms of body composition, the calories in/out balance says nothing about how hormonal regulation accounts for fat accumulation, expenditure, hypertrophy, respiration, heart rate, body temperature and a whole host of other complex and integrated functions that in total are in balance.

OK, you can click on the images to enlarge to full size. The numbers at the top of each bar represent the % of RDA. The bars with the two horizontal hashes at top are those that are off the charts, but here, it is particularly important to look at the numbers, to get an idea of how far off the chart they are.

Now of course, nobody’s going to eat the roughly 30 ounces of liver or salmon needed to get to 1,400 calories, but you could eat a 4th of either of them and still break bread and leave it on its ass. And we also aren’t even touching on the aspect that most of the “nutrition” in the grains are in the minerals, and grains have high levels of phytic acid that bind to minerals, preventing their absorption.

Cut back on the liver and salmon, add in some leafy greens, maybe some starchy veggies, add some fruit in there, maybe some nuts and eggs and you will always, always blow grains out of the water, and you’ll do it every time. No exceptions. It’s not even close. Grains are poverty food, plain and simple. Are you that poor?