A Morning Stroll Through the Paleosphere

~ I told you I would come to dominate the world. Mail Online: Free the Animal!

A new restaurant, called Sauvage, has opened in a former Berlin brothel. Although the name might suggest something unusual, it is just an attempt to serve diners a Paleolithic diet. Yes, I mean the foods that our caveman ancestors consumed, basically meat and berries rather than bread, muesli or spaghetti, though you can bring your own wine, which is a major concession to modernity.

This is part of a wider movement, which started in the US, called ‘Free the Animal‘. This involves replicating the lifestyle of cavemen. Apparently you lose a lot of weight, gain muscle mass, and an improved sex life.

I particularly like the bit about an improved sex life. If that doesn’t motivate you, what will? That link in the quote refers to a Der Spiegel article about the restaurant that also links to a February, 2010 Der Spiegel piece where I’m interviewed along with Art De Vany, Erwan Le Corre and John Durant: A Stone Age Subculture Takes Shape in the US.

~ Diane Sanfillippo talks some real sense about five minutes into her Podcast #9. It’s about confirmation bias, and she mentions and links to my very crude way of expressing that notion. Thanks, Diane! Ballsy.

Update: It was actually Liz @ CaveGirlEats talking about my post. Alright, two ballsy girls then.

~ Have you taken The paleo Diet 101 Quiz on Veri, yet? If you haven’t, please do and please participate. Veri is a new endeavor with a great motto: Learn. Teach. Play. Anyone can do any of those things or all, and I’ve found it quite a bit of fun, actually. So, you can start a quiz or participate in an existing one such as the aforementioned, that was kicked off by my good buddy Patrick Vlaskovits of PaleolithicDiet.com, a free newsletter that doesn’t come out too very frequently and deals mostly with the lighter, fun side of paleo. Check it out too.

So not only can you participate in the paleo Diet 101 quiz, but once you’ve answered all the questions, you can even submit questions of your own, and what’s even more, you can link to one of your own blog posts, that of a favorite blogger, or really anything out there that educates on the topic of your question. So, if the question is answered wrong, the visitor has an opportunity to be taken to the link provided, in order to learn why they got it all wrong.

Pretty cool. Check it out. Currently, there are multiple questions in each of the following categories: The Diet Basics, Diet & Nutrient Truths, Do’s & Don’ts, The paleo Effects, and paleo Literature. I have 2 or 3 questions in there myself. See if you can spot them.

~ Those of you who like to go to restaurants and, you happen to have an iPhone or iPad, there is the coolest app available now, and it’s free. Check out this very short demo. You can download it here. Here’s their blog.

It’s really slick. And if you’re still not convinced, here’s a couple of screen shots (click on it to open the full size). 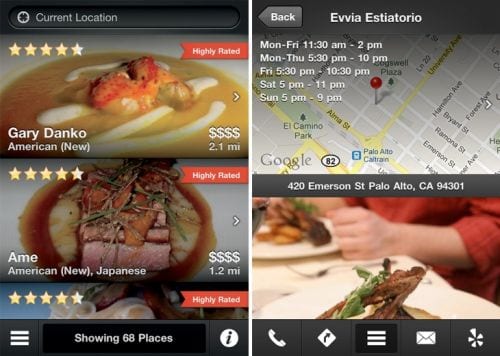 I an email exchange with the developer, he told me that you are able to search in all metro areas of the US and Canada, and most major areas of Europe.

When I downloaded it I was instantly able to see several restaurants within only a few miles that I was very interested in trying, including an Ethiopian restaurant I had no idea existed. I’ve only had it one time, and that was in Djibouti in 1990. It was excellent, very meaty, you eat with your hands, and they roast their coffee beans while you’re having dinner. I found a lot of other places to try as well.