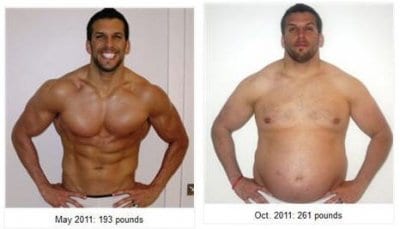 Drew Manning before & after

Yea, that’s right. The “before & after” is reversed. IN this case, the before is to the left and the after, to the right, 70 pounds later.

Since May, Drew Manning has gained about 70 pounds on purpose. And he’s not done yet.

Drew is a personal trainer and has always been the “fit guy.” He’s now on a journey he calls Fit 2 Fat 2 Fit where he spends six months (he has about 4 weeks left) eating unhealthy food and not exercising, then he will take six more months to get fit again. Why? To experience for himself what it’s like to be overweight, how tough it is to lose weight, and ultimately show others how to get fit.

Most interesting of all? What he’s doing to make himself fat.