Lets all Go to Paleo Hell Together

OK, but not before we know what we’re missing.

And so if I’m not going to hell for that bit of disrespectful chicanery, perhaps this’ll do it.

Do you know how to cheat well? First off, let me say that “cheat” is really the wrong word. It should rather be on the order of “sin,” or something like that to more convey the gravity of going off doctrine. After all, there are all those good folks out there digging through PubMed each and every day to deliver to you that which you could not have possibly known otherwise: that an evolutionarily appropriate diet, focussing on Real Foods is going to give you a foundation of suitability from which you can then build individual optimality.

What in the fuck are we searching for?

So in honor of sayin’ fuck all that, for good, I’m putting up photos of my most recent sins; one at a restaurant, and the other, still digesting here at home.

This is from a small stand that’s been around since long before I was born: Happy Hound, in Los Gatos. They do dogs & burgers. But they also do BLTs. Click to enlarge. 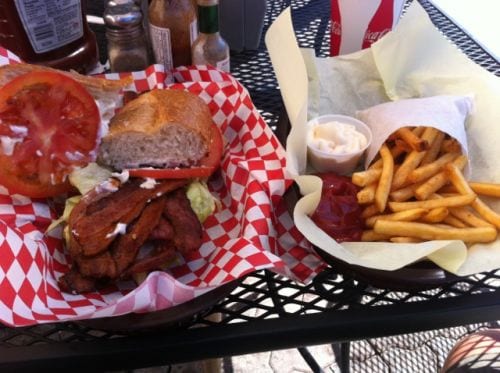 The bun is toasted, and the bacon counts six thick strips. The frys are to make me regret it, as well as the loads of soy oil-based mayonnaise. This was a couple of months ago and I still have mixed feelings over my sinful decision, owing to the digestive distress felt for hours afterward. And I’ll still likely have to face paleo Judgment Day, someday. Sin now, pay later.

I’ve been eating really good with excellent feeling for far too long, though, and so today, I had had enough. Somehow, three Thomas English Muffins ended up in the fridge at the end of my wife’s grills & frills weekend, and I had been eying them. For a day. My wife was misnamed Beatrice. “Eve” would have been more appropriate for the temptress.

It was over 30 years ago that I had an idea: tuna salad on a toasted English muffin would taste very good. …And there was light. And it was good. 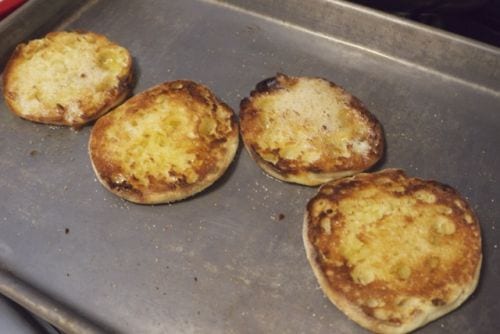 By this point, it was all over. You actually have to cut the Thomas’ in half on your own, giving credence to the illusion that you’re really not selling your soul to the Devil.

The tuna is very special, however. One might say Godly, but then one might risk cataclysm in putting it together with the Devil’s handiwork. I’ll let High Seas Tuna worry about that. It’s their job, and I paid them well for my last batch.

I make my tuna salad differently about every time. I have no recipe, just principles: lots of mayo, pickle, other crunches. … An aside about mayo: I don’t do the various Paleoish versions of home made, and that’s because it’s been a couple of months since I had a drop of it. I’ll just chalk it up to laziness and sin when the rare opportunity presents.

The last is that “secret ingredient” that when you don’t know, causes you to ask, “what’s that?” For this batch only, which was a single can, I also put in about a tablespoon of Greek olive oil and just a dash of apple cider vinegar. Then, you mix it up, smash it down and let it sit to cure for at least an hour. 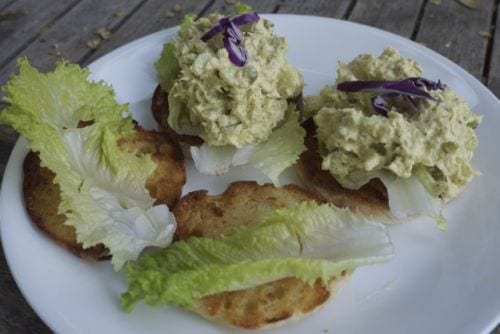 Problem was, there were three English muffins, but I wanted to leave one for Eve, if nothing else but to reflect on what she had done to me. I mean, who knows? This could kick off three thousand years of Epically Proportional paleo Purgatory… A few dozen intrepid, inferior bloggers might get together and write a paleo book that ends up being The Paleo Book to End All Paleo Books (kinda Biblical) and 3,000 years from now, my wife is still known as Eve, but I’ve been redubbed: Adam.

And if there was any doubt, I used the rest of the tuna in a corn tortilla. 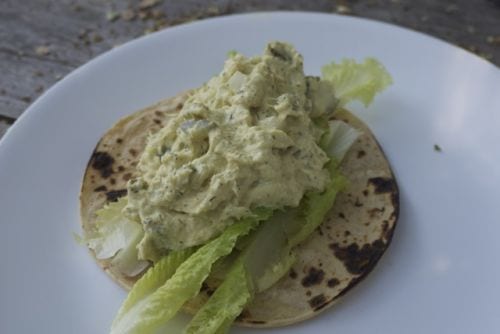 Alright, time to go look for the rods, switches, cat o’ nine tails and the sjambok.