Hey Steve…
Specialization Screws You, One Way or Another

Ricky is passionate about what he’s done. More importantly, and since Americans make up the preponderance of readership, he’s an Englishman — and so you’re seeing how badly it could have gone for you.

Joking. You know, I’ve blogged about traveling the world, and always when sitting at a bar enjoying a pint with an Englishman somewhere, I was asking then if they knew at what precise hour that night the sun would set on the Empire. They really hate that, and they don’t. It’s a time past and I should hope that when America is no longer the “light of the world,” which it is falling all over itself to do in socialist frenzy, that it has as much grace about having lost the world torch.

I have for all my life admired and respected the English way…stiff upper lip, pride, courage, and all that. They have lessons to teach us still. And hopefully, America has lessons for others to admire in decades to come that go beyond how to manage a McDonald’s. I sure don’t see a singe Steve Jobs on the horizon in America. Wer’re all about “troops,” now. Will the great American Industrialists be enough to inspire, as the British backbone has inspired? I hope so.

And so I continue my extended interview with Ricky Graham.

There are a lot more embedded photos, in both Part 2 and Part 3. Here’s a preview: 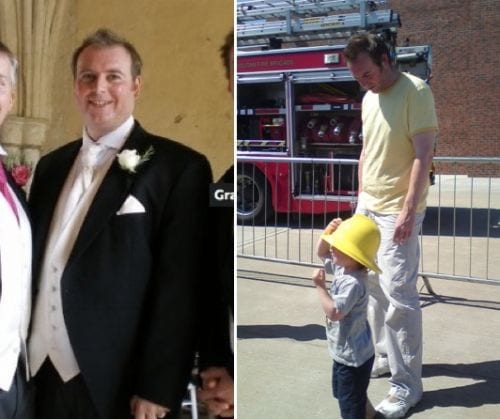 And now here’s his story.

So, I said I’d put something together for you. I guess I should start by telling about myself and what lead me to a paleo lifestyle.

I’m now 37 years old and work as a Creative for Apple. I was a sound engineer for most of my life before this and that is where my poor lifestyle stemmed from. I was a pretty heathy kid, played sports and ate as well as my parents could feed me by their knowledge. My dad was a butcher so we always had good meat but this was always surrounded by lots of bread and other grain based foods. When my parents separated I became vegetarian (not because of my dad leaving though) and remained this way until about three years ago. Studio life meant being locked in a room with little daylight, long hours and a high diet of junk food, coffee and cigarettes… With the occasional alcoholic beverage thrown in :). I didn’t exercise and after a while the desire to left me completely and the pounds piled on. It was ok, I was happy with how I was. I accepted myself after all I was just a little chubby.

I always ate as best as I could but being a vegetarian meant that I ate lots of pasta, bread, cereals, fruit and vegetables. A lot of meals involved pastry of some kind also and looking back I hate to think what my daily grain based carb intake was although I thought I ate healthily. It was certainly low fat, even skimmed milk. Everything I read and heard meant that I was doing the right thing. I was just a bit heavy as I never exercised and sat at a mixing desk for 16 hours a day. In time I wanted a career and life change and so left the music industry. I think this triggered something in me that lead to more weight gain. I wasn’t eating the best food, still not exercising and I’m sure the mood change and realisation that I was unsure at what I was doing seemed to do something to my metabolism. Clothes got tighter and I had to buy bigger jeans. I was wearing 38″ waist but they were tight. I couldn’t bring myself to buy the bigger size as that was too depressing and made me think about how big I was. I really began to lose confidence in my physical appearance.

So, a few years ago we decided to leave London and start a family and begin a new life. At this time I was at my heaviest and the prospect of moving to a coastal town appealed. I’d get a bike and try and get fitter again (as if). I had started to eat a little meat again and was beginning to enjoy it a little although I’d never admit it ;) I registered with the local doctor and had to have an assessment. That was when it hit home. I was 262 lb, my cholesterol was 6 and my blood pressure was high also. I was advised to start jogging. Yes, I heard it right, my overweight doctor suggested jogging, as you can guess I ignored him. Time went on and I just got unhappier and unhappier, I would only buy clothes online as then I wouldn’t need to go into a shop and face someone admitting that I was a fat fucker. Around this time I had three weddings to attend, two of which I was best man. That meant I would have to have my photo taken. I had shied away from photos as I was too embarrassed by how I looked and wanted no evidence of what I had become. What I saw from the photos filled me with completed dread and a realisation that I was a mess. (I’ve included them here for you to see) I also kept thinking that my little boy was going to have a fat dad, I didn’t want to be that role model… That sounds so bad.

Then, at a low ebb I saw an article in the local paper about an accountant that had a real health issue but had lost 80 lb on something called the Caveman diet. He’d done so well he was about to run the Great North Run, a local half marathon. I was blown away, it gave a brief overview of the diet but gave nothing much away so being an internet junkie I opened up the mac and got up close with Google. My search brought me to a website called cavemanpower.com ran by someone called Matt Emery. It explained the ethos of the diet and gave a real simple three stage way of attempting to kick start the lifestyle. Something ran true with me and so two days after the third and final wedding I started. It was October 19th 2009. I followed the stages and spent two weeks fasting through stage one and then eating anything I wanted to learn how “bad” food made me feel. Then, in stage two, I spent two weeks fasting and then eating paleo to learn how I could feel and then hit the ground running with stage three. This first month was really difficult. I was completely addicted to gluten based carbs and was going through withdrawal. I was coming down :)

I just kept reading, trying to figure out what not to eat and what I should eat. A link on Matts site lead me to marksdailyapple.com, a link there lead me to paleonu.com and of course your site. I read, I ate well and I walked a lot. I couldn’t do much more than that. I was so out of shape that that was all I could do. As time went by I kept having to buy new clothes. The weight was shedding from me. I lost 14 lb each month for 4 months. I stopped weighing myself as it was no longer about the weight but about my composition. I ate pretty strict paleo for about six months and then started to experiment with foods to see what I could tolerate. I tried some dairy which made me feel ill, I can have a small amount of cheese here and there but that is all. Coffee was ok as long as I don’t have it too often or have it decaf. Red wine isn’t too bad either, again as long as I don’t go mad which does happen but only every now and then :)

At the one year mark I decided to step on the scales, interest got the better of me. I was 173 lb. Holy fucking shit :) I tried on all of my clothes that were left and laughed my arse off. Nothing fit, even the odd tops I had kept from when I was in my mid twenties were too big. A happy day that one :)

Since then I have maintained a 90% strict paleo diet, I actually feel bad if I stray which I know I shouldn’t but maybe thats just my make up. I started to exercise a little around then. I started running but this only lasted a few months as I found it a bit dull. I joined a gym in January and go once a week to lift heavy things, following the Doug McGuff method outlined in Body by Science. I bought a kettlebell recently and give that a swing a couple of times a week also. At last weigh in a couple of months ago I was 178 lb although I’m getting leaner. I spent a year losing the fat I’m now planning to spend the year gaining some muscle. I’ve never had a body that is lean and its quite exciting thinking that I can achieve one. My entire outlook to my health and fitness has been turned on its head. I’m almost evangelical about it and most of my friends think I’m a little nuts.

What can I say. paleo has changed my life :) No going back.