Standing Firmly Against “Everything but the Kitchen Sink” Omelets

When people order an omelet with 6 or 7 ingredients at a restaurant, or relate to me the one they made at home and how many different things they put in it, I’m always left to wonder when they’re going to learn to cook a real omelet.

Eggs are the primary ingredient, by definition. And while a plain omelet cooked on low in lots of butter is a wonderful thing — you should try it to get your bearings on the base ethic of the thing — there is certainly room for an ingredient or two — just enough to stand out, but not enough to make you forget what the hell you’re doing.

As plainly and directly as I can make it: raiding your fridge to make an omelet is just plain lazy. Worse, it’s an admission of a total lack of imagination in cooking.

I’m typically a single ingredient guy. Just like when I do have a pizza, I prefer a simple one to an “I don’t know what I want, so make it a combination.” I like pepperoni. Some onions are a nice touch, or, black olives — but not both.

So Beatrice was off this weekend for the umpteenth “girls’ weekend,” and having been unable to locate either the party hats or kazoos since Friday evening, I decided to do an omelet Sunday morning while football was just getting started. My choice was mushrooms, since I had a half of a tub left, I hadn’t eaten since sometime in the afternoon yesterday, and it was time to use them. Mushrooms keep very well if, 1) you don’t enclose them in plastic like a moron, and 2) if you dispense with the Frigidaire craze of…I dunno…the 30s? Stop putting shit in the refrigerator unnecessarily! I swear to God: next time I see tomatoes in the fucking fridge, I’m going postal. Tomatoes should never experience cold. Ever.

So let’s cook a simple omelet. I began with pastured Kerygold butter & onions. You can click on the images for the hi-res versions. 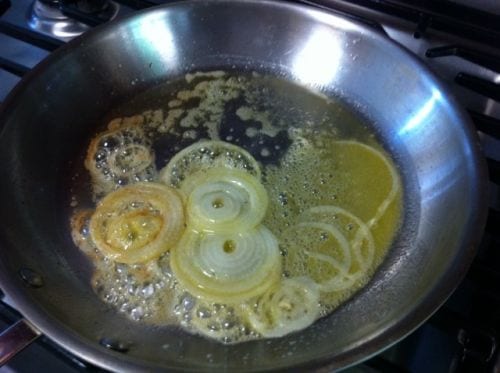 Then it was on to the entirety of the mushrooms once the onions were well on their way, because in the end, I want the onions totally caramelized & toasty — which really brings out the flavor. 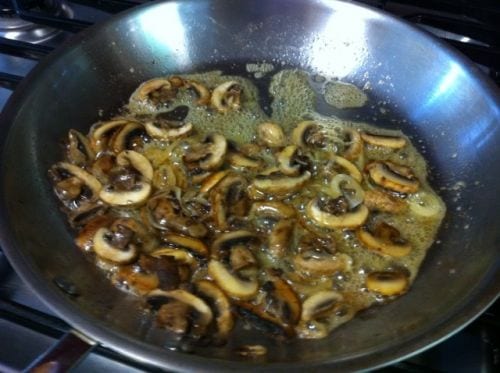 Just about ready to add the egg

As you might have noticed, I never use non-stick pans. In the case of an omelet, it will stick, but if you’re patient, keep the heat low-medium, and shake the pan side to side, the moisture from the egg should eventually unseat the stickiness. Just keep jostling the pan. Also, when you move the cooked egg about to make room for the raw egg, use a fork so you don’t scrape your fat off the cooking surface like a spatula does.

I had on hand some New Zealand Grassfed Cheddar. Unlike cafes and some people at home, a little is plenty for even a 4-jumbo-egg omelet. 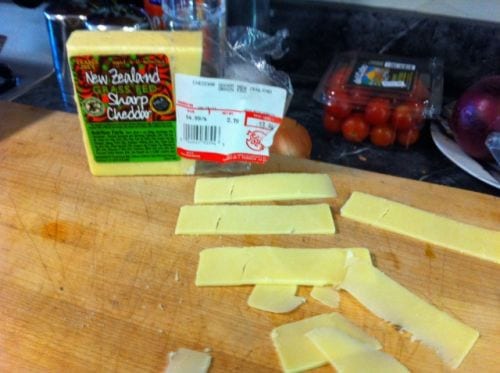 Because this was so enormous and it looked so cool with the ‘shrooms on top, I decided to finish it under the broiler, along with the cheese. 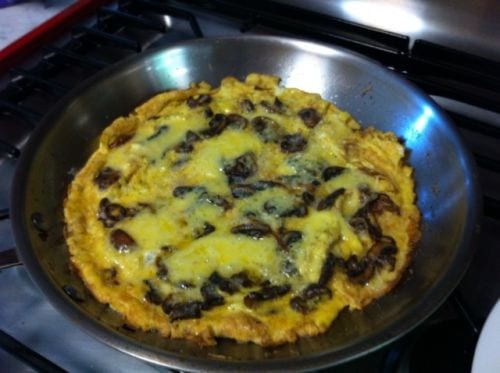 The cheese is but a light enhancement, nothing more

And there was nothing left but to eat it, which I did outside amongst the falling autumn leaves. 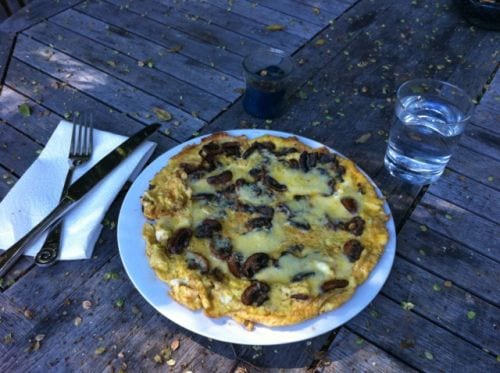 So there. And by my standards, using three ingredients is pretty steep for me. Sometimes I do plain, but let the butter brown first. Other times, I’ll do just onion, but a lot of it, and the onion is well toasted.

Give it a try. See what you can do with one, and only one ingredient.