At this writing, I don’t really know…that trifecta of question posed in the title.

What I do know is that white rice, in the way I prepare it, gives me no problems at all, as a former fat man with chronic heartburn since I was a teenager. There are opposing views, and I’ll get to them. In the meantime, my last meal. Click the image for the full size and high resolute. 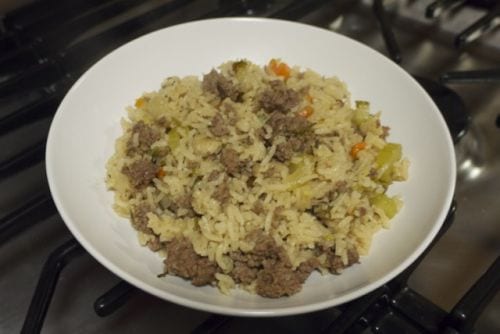 Whether you want to do rice or not, it’s up to you. There’s a wide swath. Those paleo folks will be across the board. The newbies or curious will say “what, I can do rice?” They might even say, “I can do this!” Maybe they’ll lose their taste for rice later, or not. Ever think of that, and does it matter? That’s individual.

You eat this with a big spoon.

In this instance, I first did the beef, low to medium heat, being patient, then put it in the rice pot with a slotted spoon. I sautéed the mushrooms and onions in the beet fat — not butter, and added that to the pot as well with a slotted spoon. In the meantime, I chopped the celery and carrot. Added them raw. Add the pats of butter. And it all went fine. Previously, I have done Applegate franks sliced up with some onion, Indian curry and other machinations. Godspeed if you need a cookbook and that’s an option, but I’m the guy who encourages you to do otherwise. Don’t fear a fuckup. You’ll learn.

Back to the Neolithic agent…rice. I have this weird aspect to my character. When I drink booze and feel good, I kinda know why, and thus don’t confuse myself that booze is actually healthy. When I go to a restaurant and have eaten the slightest bit of bread, I’m guaranteed to have nuclear heartburn. Since I indulge in the bread so infrequently, it’s a pleasure/later-displeasure I can put up with, now an then. Less and less frequently.

It’s not like I’m going to hell, so newfound Paleos need to dump that metaphor, right now. Yes, if and when you indulge, and if you commune with the community, you will run into purists who will be difficult to differentiate from those you already dumped; those trying to guilt and shame you into fear-based control over dying Right Now, or at least pretty soon, or well before your time. Before, it was saturated fat and cholesterol. Now, it’s rice & potatoes. No amount is safe!

Or, you figure out your own way, apart from priestly pronouncements. Is rice a paleo sin? I don’t even know. I cook mine in various stocks, season them with herbs & spices, do all manner of things.

Moreover, I don’t eat rice all the time. I fire up my favorite cooker, as you see to the right, the Cuisinart “fuzzy logic” cooker that does awesome rice almost no matter what you do. It’s so bullet proof that I have gone far beyond its recipe book. The recipe book does include Risotto, sushi rice and all manner of other things it can do for you, but I’ve found that I like to just go with whatever I do and have it cook on the Mark 1, Mod A setting of “white rice.” And if you’re doing just rice and not other bits like meat and veggies, it will automatically keep it nice and warm and moist for 24 hours to come.

I hate too many variables. Thus I push but one button. It’s not paleo, but I love it. On the other hand, I don’t eat it every day, ever meal, or even every week. I tend to eat it one or two meals for a few days, then go meat & veggies or salads for a while, then maybe some potatoes, even a corn tortilla or two, then back to rice. Other times, most often even, I eat very little carb. Go figure. I’m just not a macronutrient purist. I eat zero carb, low carb, moderate carb and high carb. Depends on the meal, and the day, or even the week. Never do the same thing all the time. That’s my motto.

…So that was last night.

Are you locked into a catechism?

Anyway, there you are: plusses and minuses, so let’s just be honest: put it all out there…because…even though I know exactly what’s right for you and you family in every single situation — I knew it 1,000 years ago, before you were born or wished for — maybe you can have other ideas. [/sarcasm]

I’m gonna link Paul below for the substantive thingy that he does so well, but I loved his Bi Bim Bap. We have native Korean friends, I have been to Korea about 15 times, and I lived in Japan five years and other than sushi and yakatori, loved going to Korean restaurants. I love Korean food and most particularly, their foresight — yes, foresight and that’s it — in fermenting vegetables of all sorts (there is probably more variety of kimchee than cheese in France, and even Napoleon recognized it was impossible to govern a country that made so many cheeses.)

Here’s my general take. After about 4 years at this thing, I know that limiting myself to a Wendy’s Triple once every 2-3 months and a large pizza from Pizza Hut (Pepperoni and onion) even far more infrequently does me no good, but never crashes my spirit for this thing. I simply love some Neo-Foods, sometimes, and that’s that. On the other hand, there are certainly degrees and I think that rice and potatoes of any sort come down on the very safe side of things. They’re not in the same league and Hot Pockets and Pop Tarts.