The biggest surprise about my post last Saturday announcing my latest insanity was how many people signed up to go insane right along with me. I’ve lost count, but there must be close to a couple dozen from the comments. I suppose the only valid conclusion one can draw is that this won’t hurt very much, will likely help in many ways, and it could be fun.

Ill advised, but I spent the weekend being decidedly not paleo, not even a little bit. I went through nearly an entire large pizza (including cold leftovers for breakfast on Sunday) and oh, yea: I drank pretty much like a fish. Saturday afternoon we got a call from some vegetarian friends, who are also French Canadians, wanting us over for a meatless dinner. It worked out OK. The meal was generally very good, if not what I’m used to, and I’m always a good guest anyway. I never turn my nose up at anything. Vegetarians and vegans serve a good role in creative ways to do various plant foods. …And the mushrooms were super awesome. Mushrooms really out to be in the meat category, when done right.

Sunday was pretty much boozing from the start of football at 10 am, through to the 1pm games and on to Sunday Night football. Go 49ers!

In the evening, I “ovened” a whole box of beaded calamari from Costco. Made a dipping sauce with full fat Greek yogurt combined with a very spicy tomato catsup.

…Earlier, during the afternoon, I got wind that my young 20-sumthin’ next door neighbor was doing some gun maintenance and so I took most of mine over and we had a firearms show & tell. 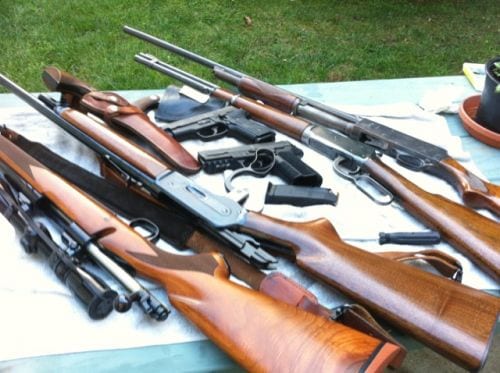 Guns (what the MSM would call: “an arsenal”)

As an aside, I think that the “gun control” — which means quite a different thing to me — debate is rather like the gay marriage debate in the US: people simply fear what they don’t know and have no experience with. I grew up with guns all over the place, including loaded guns on my grandparents’ bedside tables (that holstered .38 snub-nose revolver was one). Beatrice and I have a large number of gay & lesbian friends. So shit, a huge portion of the antagonism in America is simply inapplicable to us, because we have no fear of either.

Personally, I want to see more competent people armed around and about in various places because, when seconds count, the cops are only minutes away. [/digression]

So it was along about the evening on Sunday when I had to make preparations to begin. Not too seriously though, as this is all in good fun and should be held to that principle always. So I did nothing, really. But at the same time, I considered what real changes I’d make. Well, one is that I would endeavor to actually eat a morning breakfast on non-fasting days, just to see how it would go. Monday morning was a small coconut milk smoothie with an egg yolk and a small bit of frozen berries. That was next to a 4-egg plain omelet cooked in ghee and herbed with dill. No coffee. Just water.

I had lunch, too. 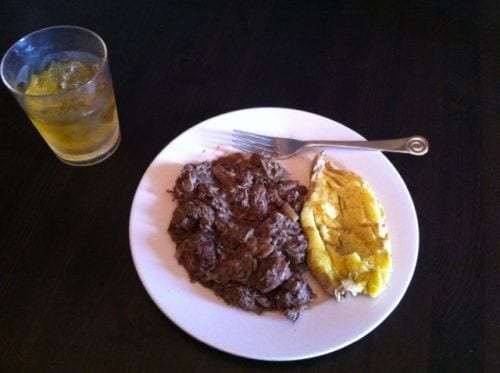 Crock pot pot roast with onion and fennel bulb; and a small sweet potato. Again, that’s green tea on the side (not scotch).

All in all, it was an easy day. In the afternoon I nibbled on a few of the thumb sized carrots, then went shopping for additional supplies to cover most of the week. I did end up getting some raw pecans and raw hazelnuts for salads & stuff. For dinner, I cooked up some mini grassfed beef burgers with onion and then did a coconut milk massaman curry for added pleasure. 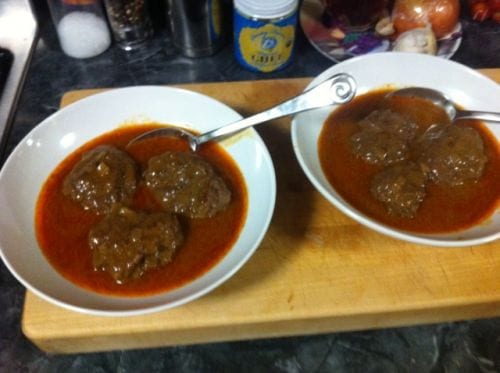 I left all the beef fat in this time, as you can see. Without using a starchy thickening agent, it is what it is. It was accompanied by another sweet potato, a big one, and I only ate about 2/3 of it. 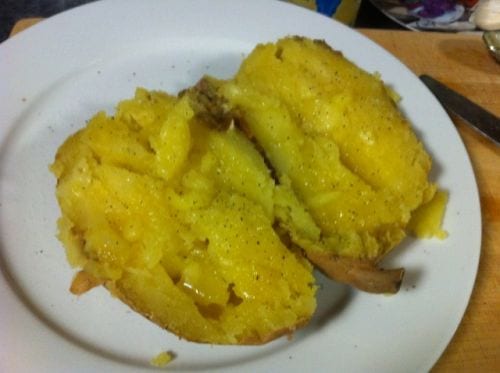 These sweet potatoes are really growing on me. For lunch, I just nuked it. For dinner, I did them in the oven at 400 for about an hour.

So there we go. We’re off & running. Those who are participating, what did you do?