The original announcement and first update are here and here, just in case you want to join us. A couple dozen or so have informally signed up, so you can check out their comments too, as we go along. In the end, those comments from real folks living everyday lives are going to be the true value to this series.

You may be wondering…is this what Richard’s going to do for a whole month? Nope. I was not expecting so many people to jump on my insanity bandwagon, but because they so generously did, I feel it’s best to have daily or near daily updates for the first week, just so everyone knows it’s really real. Then perhaps a couple or three updates next week and then taper it off going into the finish.

But I do have two unrelated, kick-ass posts in draft, and one should be up shortly after this goes up. So stop by again later.

One thing is becoming very clear to me, something I knew before but has been made more real in the last few days: don’t go out to eat; eat at home, fix it yourself. I haven’t been to a restaurant in days and days, and it’s beginning to show a difference. No matter what instructions you give, you really don’t know what you’re in for. My advice in general? When you do go out, save it for a 100% protein meal, i.e., fish, a big steak, or something else that’s grilled or broiled. This minimizes the crap. If you do have vegetables, ask them to be steamed, then add olive oil if they have it (risky, because it may be olive flavored soy oil, unless it’s high end Italian or Greek) or, perhaps butter, so long as it comes in some sort of container where you can verify it’s really butter and not fuck-you-up margarine made by assholes and promoted by cheap conmen. But best of all, try to stay out of restaurants most of the time.

I cooked breakfast for myself and Beatrice yesterday morning, at like 7AM, before she went to work. I believe I already mentioned that I decided to use a bit of raw pecans and raw hazelnuts for things, and so this was about 1/2 cup each of frozen berries, just a sprinkle of the nuts, about 1/4 cup each of 100% pure, not from concentrate pineapple juice, and just enough coconut milk to cover, about 1/3 cup each. Then I scrambled 5 eggs in ghee where Bea got the equivalent of two and I got 3. Right after, I fried up three slices of hickory smoked, uncured quality bacon from Whole Foods for myself. Sorry, no pics.

For lunch, I had a Big Salad with an entire can of wild, shallow line-caught tuna from High Seas, arguably the best in the world, packed raw in its own juices and cooked once, in the can (commercial branss cook, pack with water or oil, and cook again to seal the cans). There’s no draining the can, at all — ever. The juice is so tasty you’ll either mix it back in with the fish, or just drink it. It’s really that good. 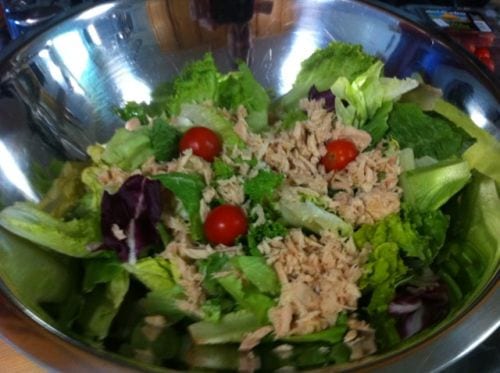 I dressed it with my dijon vinaigrette and yes, I do need to do a video to demonstrate how easy it is to get an expert emulsification in under a minute. 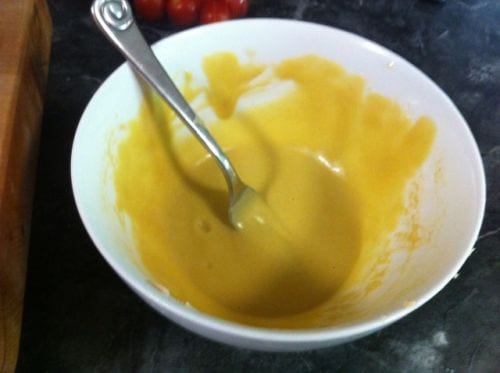 For dinner I just had some leftover cold chicken from the fridge, and that was it.

In yesterday’s post, I showed you a very large sweet potato of which I only ate about half or so. I had dressed it with ghee, and asked my wife to save it. By the way, sweet potatoes are both the white skinned, yellow flesh ones, as well as the darker skinned, orange flesh ones you see at the supermarket. I much prefer the yellow flesh ones. Much prefer. But the orange flesh ones are most definitely not “yams.” Please stop the confusion. You have likely never eaten a bite of actual yam in your life, unless you’ve had a vegetable measuring 4 feet and more in your house. I dunno, perhaps there’s canned stuff about, but I’m guessing it’s really just orange flesh sweet potato.

…So I took the leftovers, added one egg, whipped it up, and fried it in some coconut oil. 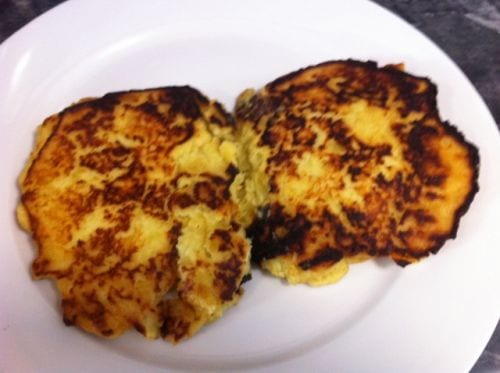 That’s it: baked sweet potato with a little ghee, an egg, some salt & pepper…fried on medium low heat in coconut oil. Then I fried two jumbo eggs in coconut oil. 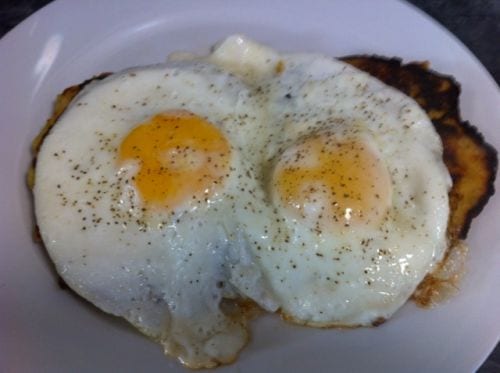 Now, I dunno about you, but when I was a kid and pancakes with syrup were a regular part of breakfast (along with bacon or sausage & eggs), I used to marvel at how some people would either put their eggs on top of their syrupped pancakes, or otherwise let things get all messed up — such as letting their bacon or sausage get syrup on them, or God forbid, actually dipping them.

Well, I always kept my shit separated, never consolidated. But at the same time, this dish here, with the sweet potatoes & egg, as well as the coconut oil? It really did make for a pleasantly semi-sweet ordeal. Try it. 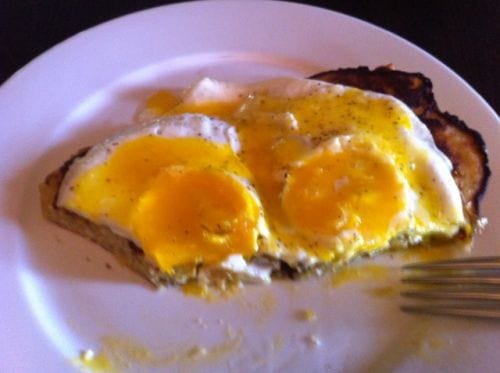 Alright, let’s go folks. How’s it going for you?