Here’s where we got this ball rolling.

So, beginning day five, here are my impressions so far.

I have no idea whether it’s the elimination of what little dairy I was consuming, lack of regular alcohol, eating exclusively at home, or a combination of all three. But I tend to believe that it’s the latter, because I was going out to eat a LOT, oftentimes at least once per day. But since perhaps last Wednesday or Thursday — so a week — all meals except breakfast Saturday morning have been at home, and they have been pretty simple meals which I also think is a factor.

I already posted a pic of breakfast yesterday, and here’s a pic of a very small lunch. 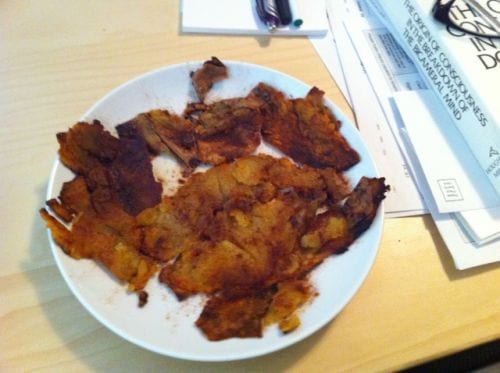 So that one huge sweet potato got used three times, as a plain baked potato, then potato pancakes and finally, the skins and bit of remaining flesh were fried up in ghee and then sprinkled with cinnamon. Amazing.

Dinner was a pretty simple affair consisting of a crunchy salad with a few kinds of lettuce and Trader Joe’s chopped up crunchies, i.e., broccoli, carrot, cabbage, jicama, bell pepper, radish and celery. Those really add a great texture to a salad. It was dressed with my standard dijon vinaigrette (EVOO, dijon mustard, red wine or apple cider vinegar, salt & pepper). For the protein, a good size ribeye steak that I did in the cast iron skillet in leaf lard, degassed the pan with beef stock, then added in Chimichurri I found at Whole Foods to make a dipping sauce. And it’s totally clean: wine vinegar, balsamic vinegar, salt, tomato, hot chili pepper, garlic, paprika, oregano, chili powder, thyme, pepper, and rosemary and that’s it. 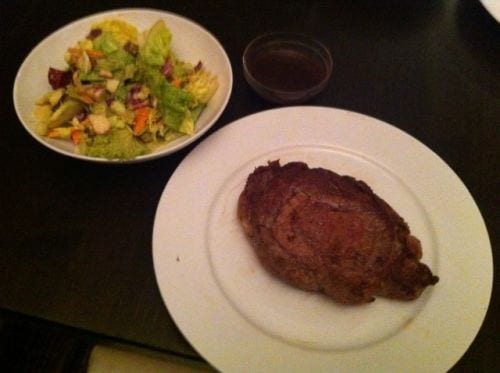 Well that’s it. Until the next time.