The Perfect Burger, Pure Paleo and an Elk Kill

The other night I happened to click into the Food Network just as a show called Restaurant Impossible was beginning; and I was kinda hooked right away. I liked chef Robert Irvine right off the bat: his compassion for struggling restaurant entrepreneurs, combined with his tough love and deep understanding of what makes a restaurant work. I’d never heard of him. I prefer to spend my time in the kitchen actually cooking food rather than watch others do it, or pretend that because I watch food shows, I know something about putting a meal together.

At any rate, it was one of those times where they were doing back-to-back episodes and so I caught a few. Then a couple more last night. Very impressed with what he is able to do with an absolute disaster in two days time and a small budget.

In one aspect, it really signals to me how, during this clean Paleo stint of mine, that avoiding restaurants altogether, as much as possible, is definitely a sound move. I just feel so much better in so many respects. Yep, eating out got way out of hand for me. Last Friday, Beatrice was off work, so we decided to go to a new fish place for lunch that had opened up, Pacific Catch in Campbell, CA. I had a bowl of Thai coconut milk ginger soup with shrimp, and to follow, fresh catch stealhead trout (which we used to fish for every year on the Klamath river when I was a kid) and grilled veggies.

Didn’t have any in the days before, and none since. Stay home, eat at home, save money and feel awesome.

The other thing Irvine does is create a whole new menu and in the process, cooks head to head with the chef in order to pass on techniques & tips. One such cook off was burgers, and I experienced epiphany. I’ve always preferred grilled burgers and only do them in the pan when the weather is crappy. But it’s also difficult to get them right, pink from edge to edge. The grill is just too hot, so you often end up with 1/4″ or more well done — and can end up raw in the center if it’s a thick burger and you’re not careful. The other problem is all the fat oozing out, leaving you dry and tasteless.

But here was Irvine’s chief trick that I had never heard of. Instead of the typical method of pressing ground beef into a dense burger, he instead rolled it lightly into a big soft ball sized shape and then every so lightly patted it down gently with his hand to achieve something about an inch thick. No squeezing, squishing, pounding, pressing.

Then it goes into the pan — I used cast iron and a bit of lard — high heat, a couple of minutes per side to brown & sear it. In the meantime, the oven is preheating. I used 350 degrees, but intend to experiment with 375 and 400. Just toss the pan in right after searing the second side, and 6-8 minutes should be enough for medium rare. Mine came out medium, so I have some work to do. I didn’t want to poke it for temperature and have fat escape, so what I did was wait until it began to plump up signifying fat was melting.

Now here’s what the chief trick of lightly patting down your burger does. Sorry for the blurry pic, only one I have. 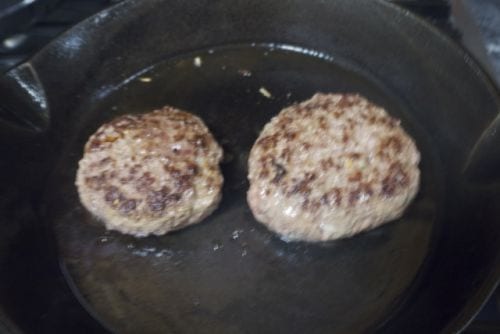 What you should notice is that there’s no pools of fat in the pan, just the bit of lard. Well, that’s no surprise because it’s just a sear anyway. But while I didn’t get a pic when they came out of the oven, there was only just the very slightest ooze of fat from the smaller one. I set them to rest on the serving plates for only a couple of minutes while I got the salad dressed, and to my amazement, no juice or fat oozing. I then put a dab of ghee on each one, put the plates into the oven for just the 15 seconds needed to melt the room temperature ghee, and we’re done. Click for hi-res. 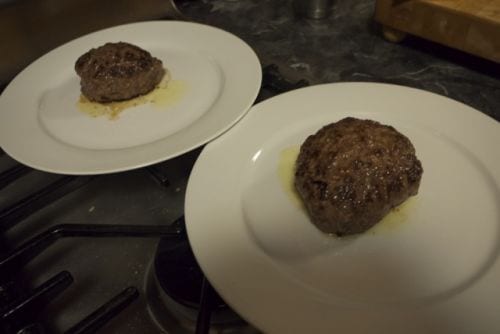 So here’s the secret, according to Irvine. When you form your burgers gently, there’s plenty of air pocket throughout, and these pockets give the fat someplace to be, rather than getting squeezed out all over the place (air is displaced before a viscous liquid).

Well, be willing to learn something new every day. I look forward to perfecting this.

…And speaking of cooking at home, my little share of this, that my brother dropped off yesterday will make that even more of a pleasure. Click it open for the big view. 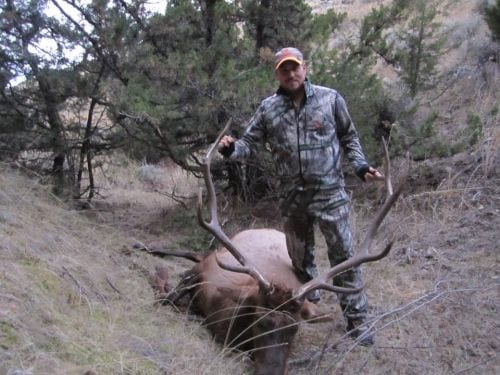 He got that in Montana a few weeks back, 300 yard shot in high winds up on the hill. 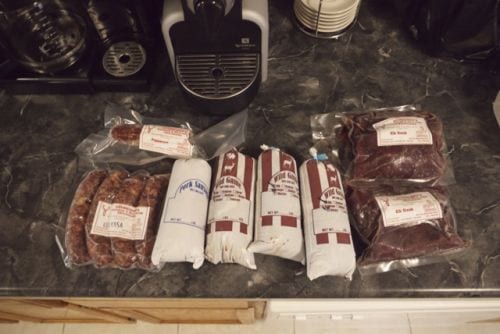 Couple of packages of steaks, three pounds of ground, Some elk & pork sausage, kielbasa, and pepperoni.