As you’ll see, I spent most of the day shopping, then in the kitchen to prepare dinner for eight last night. All the images can be clicked for their higher-resolution versions.

On appetizer, we have some of by beef and chicken liver pâté. 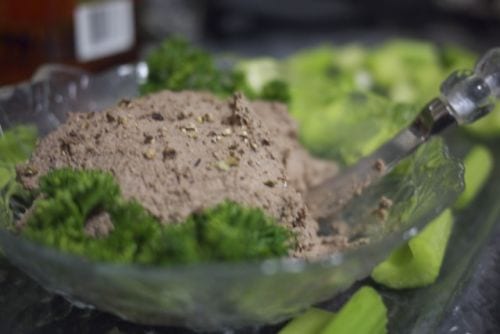 Alongside was my favorite way to serve up deviled eggs. I originally did it way back here. 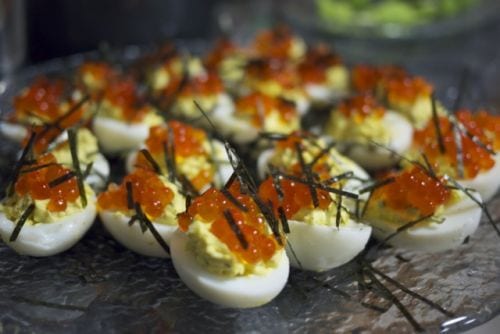 The first course was muscles using this basic preparation. Forget to get a picture so this is actually from a previous preparation of the same thing. In addition to what the recipe called for, I had about a cup of vegetable stock in there. You can use chicken as well. 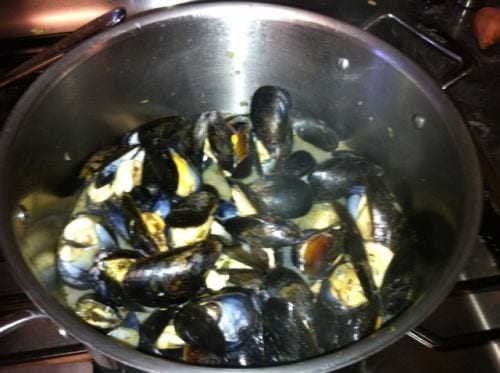 Then it was on to the Roasted Butternut Squash Soup, a Williams-Sonoma recipe. I added some heavy cream to it as well as cinnamon for a particularly holiday flavor, in combo with the nutmeg. 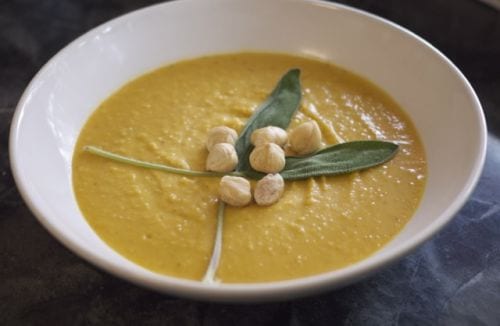 And finally, the salmon, which I had acquired fresh at a fish market early in the day. North Atlantic wild caught. Here was the preparation before going into the oven. 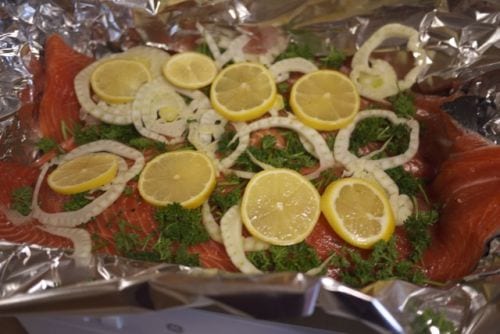 Very easy. I lined the roasting pan with three long sheets of foil. On that I drizzled olive oil and spread it around so the skin wouldn’t stick. Then I just tossed in a bunch of chopped fennel, fresh parsley, and sliced lemon. Laid the two sides of the fish on. added a cup or so of white wine, dusted the filets with sea salt, and then added more parsley, fennel and lemon. Then I closed it all up with foil. 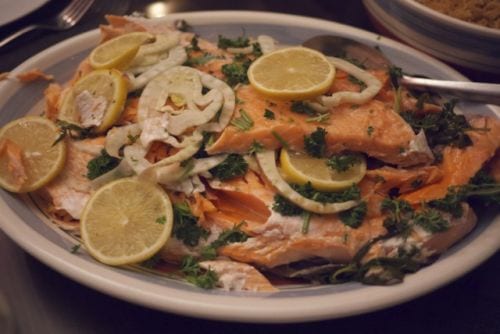 Salmon at the Table

Easily the best salmon I’ve ever cooked. Totally rare and moist. I served it with white rice cooked in vegetable stock and at the end, stired in finely chopped celery and fennel.

My cousin brought an amazing desert that was a small indulgence for me in return for all the work in the kitchen: a dark chocolate soufflé with a dark chocolate peppermint sauce. I was glad they were small, cupcake sized, because they were amazingly rich. Totally home made and delicious. Thanks Frank & Charlene. Unfortunately, I forgot to take a picture.

This afternoon, we’ll be headed over to my brother’s house where an 8-bone prime rib is about to go in the oven at 200, low & slow. Here’s another time. And yet another, thin sliced English style.

Alright, have yourselves a mery ‘ole time, indulge yourself a bit, but always cheat well.