Don’t Listen to Me. Listen to Dr. Terry Wahls, Cured from Debilitating Multiple Sclerosis (MS) On a Paleo Diet

As so many commenters on various posts point out from time to time, almost nobody will listen to them about their “Paleo Diet,” even in spite of dramatic weight loss, usually accompanied by equally dramatic health improvements.

The reasons are usually similar: “you’re not a doctor;” “it’s just a fad;” “grains are in the Bible, so they must be a healthy;” and on and on. What the reasons all boil down to, however, is authority. People simply wish to be told what to do and for better or worse, neither you nor I count as a likely source of authoritative information in their eyes. This, in spite of the increasing trend toward lay persons actually being more knowledgeable, informed, and current than are the “experts,” cloistered as they are in their various institutions beholden to producers of exactly the sort of “foods” causing all the problems, as well as the drug companies enjoying the ride for all it’s worth.

OK, so let’s concede: Have it your way. You want authority, then how about not only a medical doctor who promotes the Paleo Diet — ’cause there’s plenty of those, as well as PhD medical researchers — but one who also cured herself of advanced multiple sclerosis (MS).

Multiple sclerosis (abbreviated MS, known as disseminated sclerosis or encephalomyelitis disseminata) is an inflammatory disease in which the fatty myelin sheaths around the axons of the brain and spinal cord are damaged, leading to demyelination and scarring as well as a broad spectrum of signs and symptoms. […]

MS affects the ability of nerve cells in the brain and spinal cord to communicate with each other effectively. […] In MS, the body’s own immune system attacks and damages the myelin. When myelin is lost, the axons can no longer effectively conduct signals. […] Although much is known about the mechanisms involved in the disease process, the cause remains unknown. Theories include genetics or infections. Different environmental risk factors have also been found [But no dietary factors, eh? -Ed].

Almost any neurological symptom can appear with the disease, and often progresses to physical and cognitive disability. MS takes several forms, with new symptoms occurring either in discrete attacks (relapsing forms) or slowly accumulating over time (progressive forms). […]

There is no known cure for multiple sclerosis. Treatments attempt to return function after an attack, prevent new attacks, and prevent disability. MS medications can have adverse effects or be poorly tolerated, and many patients pursue alternative treatments, despite the lack of supporting scientific study [Perhaps because all “scientific study” is focussed on making big bucks by patenting a pill, and not alternatives to pills. -Ed].

While I’m not qualified to judge if what Dr. Wahls did for herself constitutes a “cure,” she no longer has apparent symptoms, and she did it by dumping the best “care” and drugs available in the world. 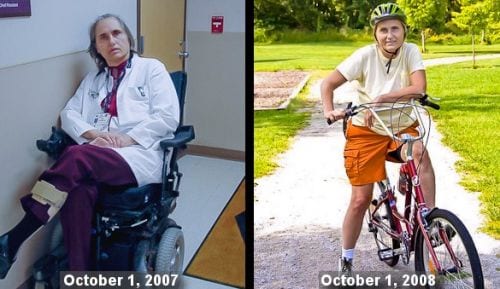 So now to the real heart of the story, her TEDx presentation in Iowa City in early November.

That video is only 17 minutes short, and I admonish you to watch the whole thing. It’s really a great encapsulation of what the whole paleo diet is about from a health and disease standpoint, rather than a weight and fat loss basis — often the thing that receives the most attention around here. One very telling thing she shows is how most Americans are deficient in an array of essential nutrients and how a proper paleo diet not only restores adequate nutrition, but delivers up to 10 times the nutrition as the Standard American Diet (SAD). OK, that’s easy but: it also provides substantially more nutrition than the American Heart Association Diet, American Diabetes Association Diet, the FDA Food Pyramid or anything else you can name — including the Dean “chubby face” Ornish Diet.

Be absolutely sure to stay tuned to the 14 minute mark where she dramatically demonstrates her results in a number of compelling images. It’s very moving.

And if that’s not enough, on November 13, at the 2011 Neuroscience Conference, she and colleagues presented preliminary results of their own clinical trial with other MS patients using no drugs, but instead: diet, exercise, and neuromuscular stimulation.

It’s also worth noting from her presentation that gluten proteins in grains and casein in dairy are associated with a wide array of ailments, including but not limited to: eczema, asthma, allergies, infertility, irritable bowel, fibromyalgia, chronic fatigue, arthritis, chronic headache, neurological problems and behavior problems. And yet, how often do you hear much about dietary intervention, as opposed to some new drug therapy? Well, you now have “gluten free,” along with the same cast of characters producing essentially the same vapid crap: no gluten, and probably twice the sugar.

Dr. Wahls tried all the best medications and got progressively worse.

She dumped the “food” manufacturers and the pill pushers, went on a paleo diet, and got better. She has a website, and a book: Minding My Mitochondria: How I overcame secondary progressive multiple sclerosis (MS) and got out of my wheelchair.

Dr. Terry Wahls links micronutrient starvation to the epidemics of chronic disease that are overtaking modern society. She explains the key roles mitochondria play in maintaining a healthy brain and body. Americans are eating so poorly, something we all know to be true, that the majority of Americans are missing key building blocks that are needed for brain cells to be healthy. The result is an epidemic of depression, aggression, multiple sclerosis and early dementia. She then teaches you how to eat for healthy mitochondria, a healthy brain and a healthy body in language that is clear and concise, even for those without a science background. In this book, Dr. Wahls explains basic brain biology in simple terms. She tells us what vitamin, mineral and essential fat building blocks are needed by the mitochondria and other key structures in the brain. Then she explains what foods are good sources for those key nutrients. Over a hundred recipes are provided to help get you started on this new way of eating. A portion of the proceeds from the sale of this book will be used to fund research into the benefits of these interventions in others.

But as I said, don’t listen to me. What do I know?