I caught a cold I haven’t been able to shake much. I woke up with it the day after finishing the book—likely the result of a compromised immune system from the stress and long hours at work over the preceding days. Or, it’s just what happens sometimes. I really can’t remember the last time I had a cold, but it was a few years back.

I’ve previously “megadosed” vitamin D to the tune of 20-25K IU per day when I felt a cold coming on and was successful in heading it off. Not this time. Had to finally result to some OTC medications and I must say, Mucinex is da bomb!

I also figured it might be good to eat well. I’ve been eating a bunch of eggs and last night, decided to do liver & onions. I got on Twitter and asked folks what they’d used to dredge or dust their beef liver with as an alternative to flour, and got back lots of ideas from potato starch to arrowroot. I ended up dumping a heaping tablespoon each of potato starch, coconut flour and tapioca flour into a bag to shake the liver in.

Preparation was pretty straightforward. I first marinaded the liver for an hour or so in fresh squeezed lemon juice per Nourishing Traditions. Rinsed it, set it out to dry. Then chopped up a half pound of bacon & fried it in the cast iron, set aside the bits and began to fry 2 medium yellow onions, sliced. When those were done, which takes a while, I scooped them out, set them aside, coated the liver with my concoction and fried the 1.5 pounds I acquired for $2.77 at Lunardi’s—a local high-end market— for just a couple minutes per side, set them on a plate to rest a bit, reintroduced the onions to finish them off, and we’ve got a meal. Click on the images for the hi-res versions. 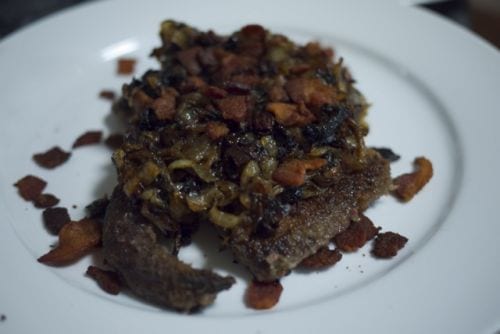 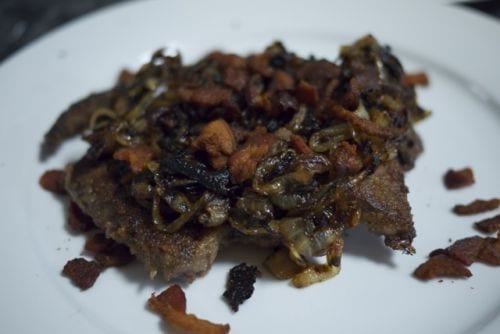 Notice that I like my onions pretty well toasty, not the “worms” one typically sees or gets in a restaurant. I like to use Dijon mustard as a condiment, which I learned from the French. We had liver regularly on the two ships I spent a couple of years on.

Yes, the “flour” concoction worked nicely. I used just tapioca flour a few years back but it stuck to the pan pretty badly. This did not.

Remember, this is nature’s multi vitamin, and considering the cost, the most nutrition per dollar that exists in the world. See how liver stacks up nutritionally against fruit, and bread.