Before I get to the details of my month long experiment that ended yesterday, here’s one of the last meals I made. 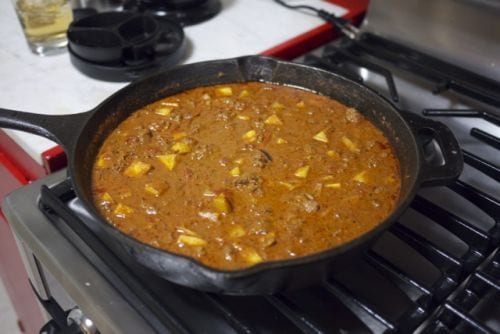 I had a package of ground beef on hand and suggested to Beatrice that I make a Thai curry with some onion and white sweet potato, or a texas style chili with regular chili powder and cayenne. She opted for the latter. But I decided to do both. Very simple. Cook the ground beef on low and when finished, I added about a cup of beef stock, a cup of coconut milk — perhaps a bit more — a can of diced tomatoes, and a half of chopped onion. Brought it to a simmer, let it reduce slightly — but not too much, because the chili powder thickens — then about 2-3 heaping tablespoons of chili powder, a teaspoon or so of garlic powder, a half teaspoon or so of cayenne and a sprinkle of Italian seasoning and parsley. Let it simmer some more until the consistency was just right, then added the cubed sweet potato, turned it to low, covered and simmered for about the 20 minutes it took for the potato to get soft.

All this can vary to taste, of course. Click on the imaged for hi-res. 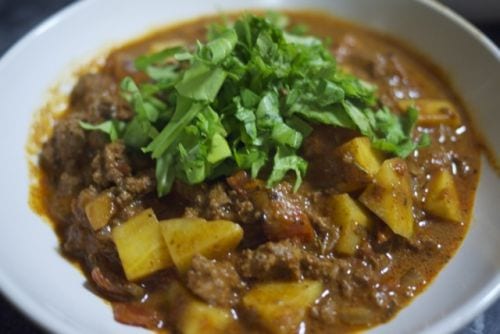 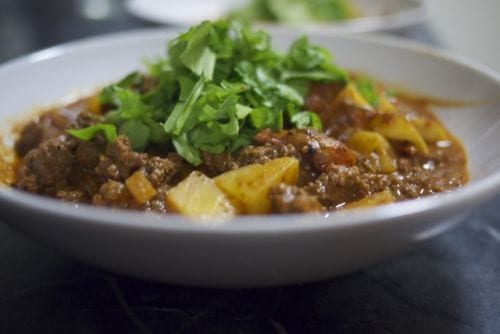 One more for good measure

Alright, now to beat myself up about my total failure in trying to follow the Whole30 squeaky clean Paleo plan. Feel free to join in, in comments.

Dallas and Melissa Hartwig do good work over there, so it’s certainly no fault of theirs I didn’t stay perfectly clean (and Dallas was kind enough to offer encouragement in email). The gory details are that I indulged in some booze; and over Thanksgiving while visiting relatives in So Cal, pretty much indulged in some totally non-Paleo things over a two-day period.

Alright, so I confess: perhaps I’m not cut out for the purity thing.

But you know what? I got great results anyway:

On that last point, several years ago I found myself having an increasing difficulty reading things up close like the computer screen, a book or text on my phone. Went to the ophthalmologist and she said my far away vision was perfect but that I needed some mild reading glasses which she prescribed. I found that using them for a couple of weeks would in some way correct the problem and I could go a few weeks without.

But over the last few months it got to where that didn’t happen anymore and it became increasingly difficult to read food labels and ingredients (that’s by design, of course) or my iPhone if I didn’t happen to have my glasses with me.

The iPhone is a great yardstick though, and over the course of the month I found it becoming increasingly easy to read when I was out and about. So, coolness.

Ok, so what shall my penance be for not sticking to plan? Here’s what I’ve decided:

I think it’s on that last point that I derived the most benefit. I was eating out way, way too much, usually at least once per day for either breakfast or lunch, and Beatrice and I would go to dinner twice per week on average. Way too much. …Way way way too mucho.

But over this last month I’d say it was more like maybe five total outings, I was as careful as possible with choices and only one outing I can recall resulted in digestive issues like heartburn.

So, my birthday is January 29, just under a couple of months away and I intend to stick with the above three points until then, and perhaps beyond, and I will also take a shirtless photo on my birthday, with the intention of having the best body composition since I began all of this.

A final thought is that while I’m disappointed I’m not able to relate how rock solid my discipline was, the alternative is that I would have continued on a path that was far too lax, and that carried adverse health, well being and body composition consequences. But even though not perfect over the month, I came away greatly satisfied that I gave it a shot, because in terms of well being, I really began to recapture the idea of what it’s all about in the first place: feeling great most of the time. I think that for me, I need to be 90/10 or above most of the time. 80/20 seems to induce a slide to 75/25, 70/30, 60/40…you get the idea.

So there you have it. You may now commence beating up on me.