A Day Off From Book Promotion

I did not expect to be spending all weekend drumming up interest for my Beyond the Blog book. In fact, I had not planned to do anything at all until tomorrow, given the weekend, holiday, etc.

And then I asked myself: is that how you do things, Richard? And so I just went for it, timing be dammed. Of course, there were snags & issues. For instance, the Kindle and Nook versions did not have images showing up, so the Hyperink folks worked into Saturday evening to get that resolved (supposedly, the updated version will push out to those of you who were the early birds). Also, the head editor on my project left the company at some point last week and I guess some of the last edits we made didn’t get into the published manuscript. Most of those were resolved too. There’s sill a few typos to fix, but that’ll happen soon. I’m also assured that the book will be available on international Amazon sites very soon.

And the print version, perhaps this week or next.

Sales have been nicely brisk, so I’m happy about that. A few reviews on Amazon too. Please, those of you who’ve read it, the best thing you can do to help is put a review on Amazon, secondarily B&N, and thirdly Hyperink. But Amazon is by far the most important for gaining exposure (such as Amazon making suggestions, etc.).

Thanks to all of you who’ve snagged it, and thanks for all the feedback. With dozens of emails, comments, tweets and Facebook input, I have received but a single negative judgment, and that was via a 3rd party, not directly.

I’ve recently read Wolf’s and yours, Richard. I think they are exact compliments. Wolf – TONS of info to justify nearly every assertion in the work. Important and helpful for a certain crowd. Yours, well, concision is the word – short, sweet, to the point. Exactly what a bunch of people need, who aren’t looking to know all the medical ins and outs, but simply want the goods on “how to.” I’d recommend your book in a heart-beat. Fast read, fun read, and not nearly so “colorful” as you tend to be on here!!!

So, the depressurization began last evening with Beatrice picking up the tab for a New York steak and pear & gorgonzola salad at Chicago Steak & Fish in Los Gatos. 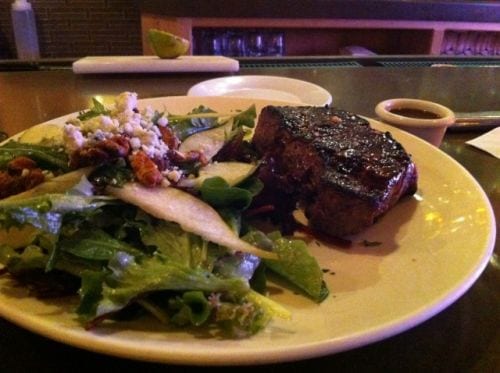 Then mid-morning, we set out on a hike for an hour or so at Lexington Reservoir just outside of Los Gatos, CA. 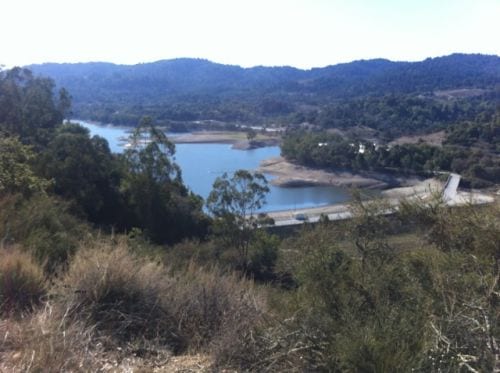 Then it was over the hill on Hwy 17 to Capitola, where we had lunch at Paradise Beach Grille. 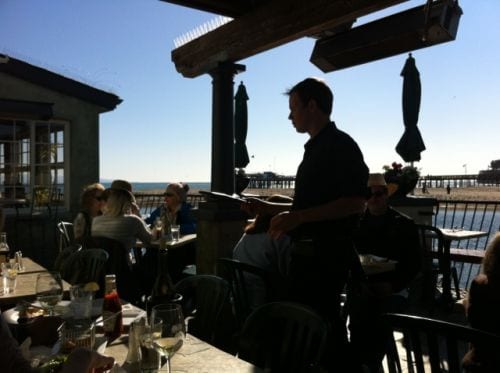 How’s that for weather in mid January? I had Oysters, then Mussels in a spicy and sweet Thai curry. 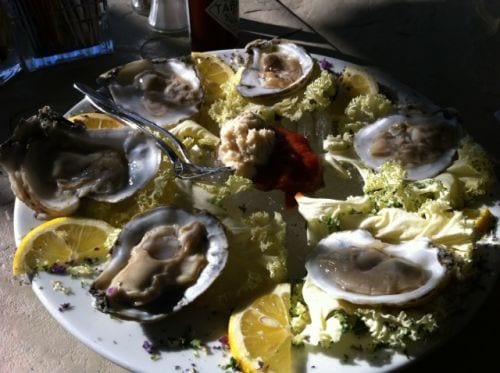 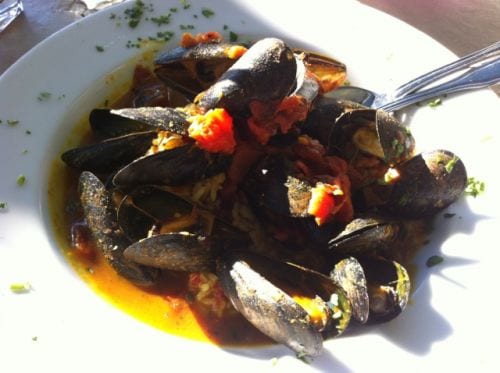 Then we browsed around and I treated myself to a new pair of Maui Jim sunglasses.

Alright, it’s MLK day and I do have admiration for his stand on non-violent resistance via civil disobedience. Everyone loves the I have a dream speech and I appreciate it as well. It was playing on NPR on the trip over the hill. But for me, the most powerful thing ever from Dr. King was Letter From Birmingham Jail.

We know through painful experience that freedom is never voluntarily given by the oppressor; it must be demanded by the oppressed. Frankly I have never yet engaged in a direct action movement that was “well timed,” according to the timetable of those who have not suffered unduly from the disease of segregation. For years now I have heard the word “Wait!” It rings in the ear of every Negro with a piercing familiarity. This “wait” has almost always meant “never.” It has been a tranquilizing thalidomide, relieving the emotional stress for a moment, only to give birth to an ill-formed infant of frustration. We must come to see with the distinguished jurist of yesterday that “justice too long delayed is justice denied.” We have waited for more than three hundred and forty years for our constitutional and God-given rights. The nations of Asia and Africa are moving with jet-like speed toward the goal of political independence, and we still creep at horse and buggy pace toward the gaining of a cup of coffee at a lunch counter.

I guess it is easy for those who have never felt the stinging darts of segregation to say wait. But when you have seen vicious mobs lynch your mothers and fathers at will and drown your sisters and brothers at whim; when you have seen hate filled policemen curse, kick, brutalize, and even kill your black brothers and sisters with impunity; when you see the vast majority of your twenty million Negro brothers smothering in an air-tight cage of poverty in the midst of an affluent society; when you suddenly find your tongue twisted and your speech stammering as you seek to explain to your six-year-old daughter why she can’t go to the public amusement park that has just been advertised on television, and see tears welling up in her little eyes when she is told that Funtown is closed to colored children, and see the depressing clouds of inferiority begin to form in her little mental sky, and see her begin to distort her little personality by unconsciously developing a bitterness toward white people; when you have to concoct an answer for a five-year-old son asking in agonizing pathos: “Daddy, why do white people treat colored people so mean?”; when you take a cross-country drive and find it necessary to sleep night after night in the uncomfortable corners of your automobile because no motel will accept you; when you are humiliated day in and day out by nagging signs reading “white” men and “colored”; when your first name becomes “nigger” and your middle name becomes “boy” (however old you are) and your last name becomes “John,” and when your wife and mother are never given the respected title “Mrs.”; when you are harried by day and haunted by night by the fact that you are a Negro, living constantly at tip-toe stance never quite knowing what to expect next, and plagued with inner fears and outer resentments; when you are forever fighting a degenerating sense of “nobodiness” — then you will understand why we find it difficult to wait. There comes a time when the cup of endurance runs over, and men are no longer willing to be plunged into an abyss of injustice where they experience the bleakness of corroding despair. I hope, sirs, you can understand our legitimate and unavoidable impatience.

You express a great deal of anxiety over our willingness to break laws. This is certainly a legitimate concern. Since we so diligently urge people to obey the Supreme Court’s decision of 1954 outlawing segregation in the public schools, it is rather strange and paradoxical to find us consciously breaking laws. One may well ask: “How can you advocate breaking some laws and obeying others?” The answer is found in the fact that there are two types of laws: There are just laws and there are unjust laws. I would be the first to advocate obeying just laws. One has not only a legal but moral responsibility to obey just laws. Conversely, one has a moral responsibility to disobey unjust laws. I would agree with Saint Augustine that “An unjust law is no law at all.”

I try to read the whole thing once a year on this day. Onward.