Been cooking a lot lately. So why not do food posts?

It was about 2.5 pounds of grassfed beef, 2 eggs, chopped onion, 1/2 tsp each of salt & pepper, big tbs each of Trader Joe’s organic ketchup and yellow mustard, handful of fresh cranberries, about a half handful of fresh blueberries I had left over, 2 minced cloves of garlic, small handful of dry white rice (the non-paleo part), a few dashes of Worcestershire, and about 1/4 tsp each of thyme, oregano & sage. And a good sprinkle of parsley.

Into the oven initially at 350 with a temperature probe. When internal got to 120 I turned the heat down to 250. Took it out of the oven at about 155 internal. All images can be clicked for hi-res. 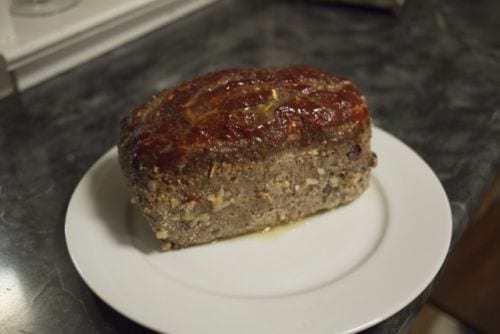 Whilst it was cooking away I prepared the sauce, which was simply lots of beef stock, some butter, a bit of balsamic vinegar, a tiny shake of rosemary (careful!), and…about a tablespoon of the TJ’s organic ketchup, then a tiny bit more to get just a slight tangy taste (it also helped to thicken). I did this reduction slowly, as I had time, so no need for starchy thickening agents like potato starch. 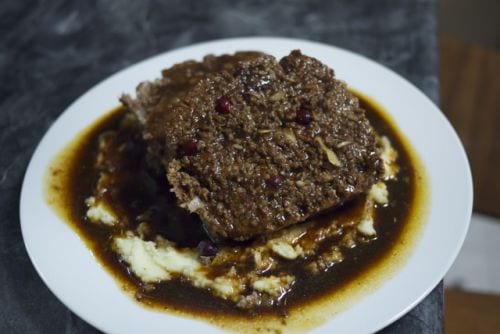 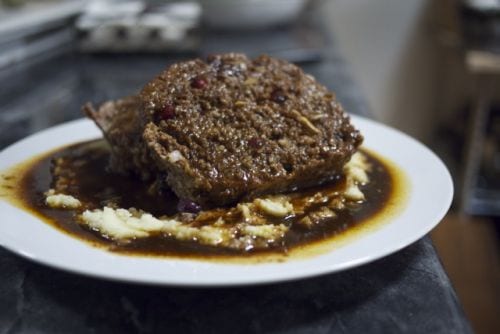 Eat well, eat big, and sometimes, eat nothing at all. My eyes were bigger than my stomach this time around. This was a rare three meal day (don’t do the same thing all the time) and I didn’t come even close to finishing that. Leftover city. In fact, it’s gonna be cold meatloaf (love it cold) with fried eggs later this morning.

Thanks to all the Twitter folks who helped with ideas for fillers. Most common suggestion was almond meal. For one, I don’t have any any longer and haven’t used it in a long while. I don’t try to duplicate baking breads, cakes, cookies and such. I don’t plan on getting any, either

I also look at things a bit different in the paleo vs not-paleo category. That is, not as a strict line to follow but more of a spectrum. For example, I have small amounts of ketchup and white rice in there, neither paleo. But the ketchup is good quality organic from TJ’s with no nefarious ingredients, and sugar instead of HFCS. The rice is just starch that will absorb moisture. On the other hand, if I were to have used almond meal, where 1/4 cup of almonds has 4.3 grams of omega-6 PUFAs, and I use two cups of almond meal for 2.5 pounds of beef, and presuming that meal is 2x concentrated compared to whole nuts (it’s probably more, actually), then I’m adding almost 70 grams of omega-6 fats to the dish and that’s quite a lot.

I’ll go with the non-paleo rice. As a parting thought on the issue, nut meals strike me somewhat like fruit juice. Almonds and fruit, both paleo. Concentrate them, not so paleo and likely worse than some neolithic foods, unit per unit, such as white potatoes and white rice.