I didn’t suppose this was really anything new, given the vast array of things that seem to come with bacon—not to mention the saying that everything’s better with bacon. I’ve even tried one of the dark chocolate bar brands that contains tiny bits of bacon—not enough in my view.

…I engaged in two indulgences on my birthday, Sunday. The first was that eggs benedict for breakfast. The second, and final, was ice cream after the dinner our good friends prepared for us.

On hand, they had tubs of Trader Joe’s Mocha, and the Dark Chocolate. But Julie had also made a good batch of bacon bits earlier for the bisque (and I also sprinkled some on my ribeye, with butter). There were plenty left, so I had an idea: let’s finish them off on the ice cream. 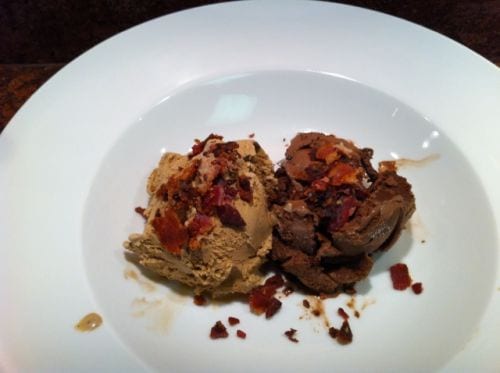 When I made my intentions known, there was a uniform sigh of trepidation. Each of the three others vowed not to even try it. And then I placed it on the table like this. 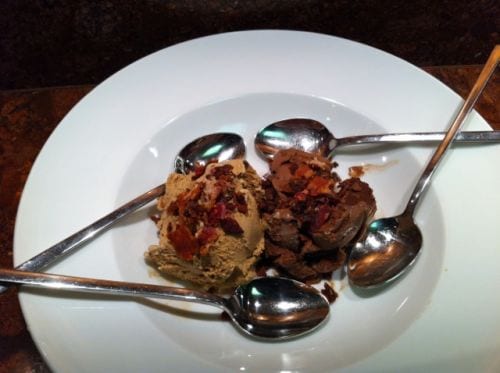 Everyone dug in, and apparently, everyone liked it and focussed mostly on which was better.

I should mention, Julie makes awesome bacon bits because, rather than draining them on a paper towel or equivalent, where they sit in the fat and soften up, she uses a wire strainer so they retain their crunch and crispiness. In all, the combination between the texture, chewiness and saltiness…it was definitely a winner and I can’t wait to serve it up to unsuspecting guests one of these days.