Rejoinder: A Podcast, a Birthday Weekend, and an Unexpected 5-Star Book Review from Nassim Nicholas Taleb

I hurt so much that I was almost ready to ask my wife—who was doing and had done everything for a weekend away—to call it off. But I observed over the morning hours how she was getting everything prepped, how much she was looking forward to it, and how she was kinda hoping against hope that I’d suck it up and just go for it.

I surmise that had it not been for the fact that instead of doing a weekend in San Fran as we’ve done so many times for my birthday—deciding instead on the upscale, dog-friendly Carmel—that she’d have pressed me to call it off. But she was enamored of the whole idea. The doggies were coming along. I was suffering, but tried not to let it show too much.

So how did it work out?

I’ll get to it later. In the meantime, I’ve done another podcast and it has just gone live at Fat Burning Man. I’m getting better at this because, 1) I’m trying not to go through the same story I’ve related in so many other podcasts and, 2) we cover a whole bunch of stuff about the book. And also, Abel is able. He does a very good job covering new ground in nutrition and health that I haven’t covered before. As I always do, I listen to the whole thing before linking it up and I think it’s a decent listen even if you know it all; but of course, you get to judge for yourself. It’s the Internet.

…Yep, Friday I about wanted to curl up into a ball. I have hardly, if ever been sick in years but this one knocked me out. Who knows what it was, and it’s silly to dwell on detail, but there are times in life when you just want the whole fucking world to get out of your face, leave you the fuck alone..and try back later.

It’s harder when it’s your birthday.

We took the hour and a half drive, checked it, got situated and headed out. Clint Eastwood’s old place, the Hog’s Breath Inn has been a Carmel staple of mine since 1989, and I can’t tell you how many times I’ve been there since (dozens). I even patterned a back yard of mine after it, once—pavers, raised flower beds, fire pit, trees and what he didn’t have: an in-ground spa.

…But Beatrice worked her butt off for this, calling hotels to inquire…making sure we had the best place, dog-friendly, with a fireplace. That in itself is healing in a sense.

We were only a minute walk away from Hog’s Breath, but on that day, Friday, I was in a state of healing myself, which is to say: fever. I walked over with two sweatshirts and a jacket on, and was still cold. And I was dumping water rapidly. No appetite at all. So no drinks, no food. But I enjoyed the ambiance and just observed, quietly. Then later, a walk around the town, to be followed by a night of horrors—with deep lung coughing and cold sweats, just to round everything out.

Saturday was a different day from minute 1. By this point I had decided to push vitamin D severely, to the tune of many thousands of units (25K+) and began to feel relief within hours. So I knocked off all the OTCs, like Mucinex, decongestant, nasal spray and so forth. I continued taking 25K vitamin D through Sunday and the cold or whatever seems dead as I sit here.

But who knows? Could have been on the way out anyway. No woo here. Just try it yourself if you like.

By Saturday evening I was feeling grand, good enough even for some alcohol, so we began on a rooftop. 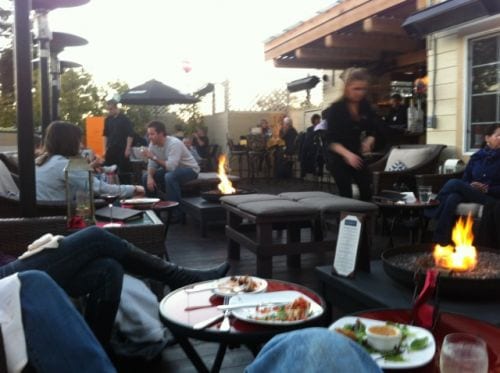 Then another place and finally, as is my preferred method—no reservations…keep trying—we landed at Le San Tropez. Pastis instead of whiskey, oysters on the half shell with red vinegar—as God commanded or should have—escargot, blue cheese stuffed dates, and a main course of fleet with sauce béarnaise. Dessert was a perfectly done cafe. Not too short like the Italians do, and certainly not miles long like the Americans do.

Oh, and a soufflé. Only, it was a real one, which you have likely never had unless you had one in France or in a French restaurant with ideals. A real soufflé is not the slightest bit sweet. It’s not a puffy sugar cake. It’s like a fluffy omelet with unsweetened chocolate in it. Then, you pierce the top and add in the semi-sweet, hot dark chocolate. A good soufflé isn’t overly sweet at all, and if you didn’t get that you’re primarily eating an egg dish, then you’re getting fake soufflé. Désolé.

…Later, we called it a night and I woke up the next day to my birthday. I called a Paleo time out and had a 3-egg benedict at Katy’s Place. I had sliced tomatoes instead of the potatoes but hardly touched them.

We walked the dogs off leash on the beach as we had the day before, watching them socialize normally with hundreds of other similarly situated free animals. Amazing how so much of the aggression melts away when dogs are off leash and as such, on equal terms. In two days and over two hours walking miles along the beach and hundreds of off leash dogs, we heard not so much as a single growl. This is by far from my first experience like this.

So next time you watch the news and politics and feel aggression, just ask yourself: who’s on the leash, and who’s not?

Alright, I’ll finish with a bit of book promotion. I’m happy about it. The print version is now available on Amazon for those so inclined, and after a couple of weeks of frustration with my publisher chewing up the Kindle chain of command, it’s finally coming available on the Amazon international sites. Copies sold are 1,200 and climbing, and since I’m in it for the long haul, that’s just great. Feedback has been so positive, like this email from Scott.

Thank you so very much for your blog, and the information you give out.

I came to your site originally from Tom’s FatHead website, after being sent to view the movie by a very dear friend of mine who is a chef. I guess you could say the rest is history.

I’m not in bad shape, but thanks to you and the inspiration of others doing similar work, I am by far after the past year in the best shape of my life. I eat real foods, and skip over the crap. Sure, every now and then Steak and Shake will lure me in (maybe once every 2 or 3 months,) but I know I’ll pay the price for it, and I accept it under those terms.

I ordered your ebook, and that day I read it. And then I read it again. I read it a third time. Congratulations… it really was that great a read. I’ve sent a number of friends the link, hopefully they will join in the health.

Thanks also for bringing Denise Minger to those of us in your regular readers, holy cats, man, she is amazing.

Glad to see the work you do, inspiring people to live their lives.

The Amazon reviews are so far, still 100% 5-star. There’s 12 of them now, and the 12th was just dropped in on Saturday, but I didn’t check until this morning.

A charming primer on the paleo idea, with an illustration through the authors own life. I read it in one sitting.

I left a comment thanking him for his great work with the best selling Fooled by Randomness: The Hidden Role of Chance in Life and in the Markets and The Black Swan: The Impact of the Highly Improbable. Both of those books and in particular the former, really set me off initially in about 2006 after a very bad week trading options, to eventually prefigure what I was to do vis-a-vis paleo and beyond.

…It seemed quite a coincidence when a year later, stumbling upon Art De Vany and his work in Evolutionary Fitness—that got me started in all of this—that he and Nassim Nicholas Teleb were friends and that NNT was undergoing his own Paleo/EvFit transformation.

Is it too much to observe that the world of the truly prescient and intelligent is rather small?