How About We Just “Make It Paleo”? 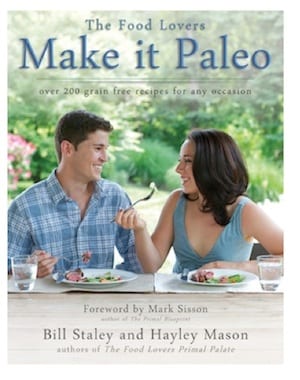 For my next “give back” segment, let me start off with a criticism. Don’t you just loath those two sweethearts, staring into each other’s eyes, as though you and I don’t matter? The youth of it? And just damn them for finding out about healthful living when they get to enjoy it to its fullest now (and I’m sure, you can only imagine…). Bill Staley and Hayley Mason—and I’m sure I’m not the first to notice that Staley rhymes with Hayley…

See, it’s a contrived scam. They’re just too perfect on that cover.

It just has to come from the mass producers of grains and drugs to deal with downward side effects, with their multi-million budgets. No way a couple young folks—who look like young folks ought to look—pulled this off. They must be being kept in some mad scientist lab, rolled out when conditions warrant to sell you shit.

No way I’m falling for it. So I’m just going to dig right into this cookbook to set you straight.

OK. Ok. I’ve gone through it page by page a few times and find two things:

See, the first thing I did before writing this was to go to Amazon and check out the reviews. I didn’t look at the roughly 130+ 5 star reviews, but the single two 2-star reviews. One complained that she didn’t have a grill, so she’s dismissed. The other complained that most of the recipes were just….paleo.

No way! You mean that Staley-Haley are like, honest & shit? Like, they want you to really be able to really cook the foods in the 500 pages of this book and not just set it on your coffee table to be admired by guests as you serve them risotto en entree, some pasta dish as a main, and a heavy chocolate dessert to finish off?

See, told you it was a scam.

They seem to want this to actually be a functional book you can use every day to follow a recipe or get ideas to fire up your own creativity. How silly. Cookbooks are supposed to get you to pine for those dishes you can’t possibly take the time & effort to cook—only making you hungry for more cookbooks, so you can wax vicarious, and the cycle continues.

Just goes to show you how shortsighted Staley-Hayley is. What a laugh. They put a cookbook together you can actually use every day, especially if you’re just new to this whole silly paleo thing.

So, yea, you can buy it here if you must: Make it Paleo. Don’t say I don’t warn you. These are actually everyday cookable recipes and that simply is not how to write a good cookbook.