If You Don’t Want to Buy A Cookbook From a Hot Cavegirl, Then You’re Probably Not Paleo

Alright, so now I can check the Jeff Foxworthy reference off my list. Ok, I just made that up. I have no list, and Foxworthy hasn’t crossed my mind in years.

…But I suspect you’ll have a harder time having Melissa “Melicious” Joulwan not cross your mind from time to time.

Yea, she was a RollerGirl star. 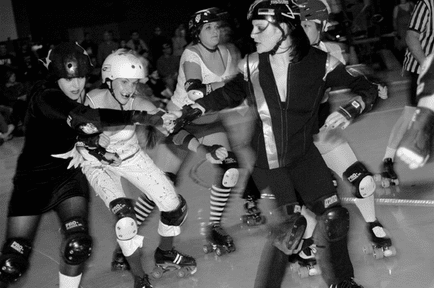 Use your imagination. Loincloth bikinis a-la Raquel…hair pulling…biting and scratching. Yea! Oh, and yea: it was all over some caveMAN. Yea! Imagination.

Oh, oh, and she wrote a book about it: Rollergirl: Totally True Tales from the Track.

Now, in the next stage of her life, she’s gone Paleo, has a popular blog—The Clothes Make the Girl—and she’s authored another book, a cookbook: Well Fed: Paleo Recipes for People Who Love to Eat.

While the science and application of “paleo” is not too varied (just enough, having gotten generally off the low-carb prescription for All Americans), the cookbooks coming out are pretty vastly varied and display a pretty wide mix in terms of simplicity to complexity.

In other words, they are mirroring the vast variety you have in the Neolithic cooking space, only paleo. Good. Thing.

So while you have some books that take you through basics, everyday cooking—which is essential—for Melissa, Ms. The Clothes Make the Girl, her book has to show off, just like she does in clothes…probably to applause and flattery as often as she can get it.

And that’s a fabulous thing. I love show-offs when they know how. How boring would the world be without them? Melissa knows how to show off.

Look: anyone who goes RollerGirl for a living, writes a book about it, has a blog called The Clothes Make the Girl, and then writes a cookbook with recipes like Ras el Hanout, Chimichurri, Pad Thai, Machacado, Scoth Eggs, Rogan Josh, Char Siu, Salmon a l’Afrique du Nord, Baba Ghanoush, and El Minzah Orange Salad—among many dozens of others—is a showoff. Not just a showoff…a competent showoff.

And I love it.

Hey, baby: paleo isn’t just about grilled meat & veggies, anymore. So go show off for those you care about the most, and get this book.

As a final note, thanks to Dallas and Melissa Hartwig of Whole9Life: your go-to place for expert guidance on a strict Paleo regimen (and other things, of course). Above and beyond the wildly exotic and creative book RollerGirl has put together, she did it in some form of collaboration with these folks and so, you have a book where every recipe, save a single one, meets Whole 9’s standards for strict paleo. How awesome is that, given the red Lamborghini status of the book in the paleo cookbook realm?