And/or, are they a bunch of cloistered pussies?

As always, you get to be the judge. Remember that, because I’ll repeat it.

Says there’s about 10,300+ readers…so one would not think it worthless offhand. After all, those 10K readers could up vote a decent paleo post and perhaps get it onto the front page (such as I understand Reddit, but I don’t claim expertise).

So I hadn’t submitted my posts to Reddit in a while, because Twitter, Facebook, StumbleUpon and other social media were working well enough. But then StumbleUpon pretty much died on me (probably too many submissions to the same URL—though they toss me a bone now and then). I hadn’t submitted anything in a very long while to Reddit, and then started doing so again recently. I hadn’t known that there has since grown up what’s called a sub-reddit: r/paleo.

What to make of it?

I just don’t know so, you get to judge. This link to one of my posts got submitted by someone else. And so did this one. In both cases, lots of votes one way or the other, lots of action and comments. Yet, everything I submitted myself got nowhere, not even up or down votes (I welcome both).

Am I just whining? You get to judge.

Here’s what else I know. I was oblivious to the whole thing until this email from a Reddit moderator.

I’m one of the moderators of r/Paleo on reddit, and I’ve been going in there every few days trying to figure out why your posts are getting eaten by our spam filter. Turns out — you’ve been subjected to a sneaky and totally arbitrary form of secret banning called “shadowbanning.” A while ago, someone decided that you posting links to your own blog was “spamming” and reported you to the higher-ups. As you should know, posting links to your own blog on reddit is totally legit, as long as you’re not just posting links to a store or something. Doesn’t apply to you, because you’re a legitimate blogger. Shadowbanning means that, to you, everything looks fine, but to the rest of the world your account is completely invisible.

Even though I’m a mod and I specifically put your name on a list of approved submitters, the admins of reddit can do whatever they want. I discovered that this had happened this morning and sent an e-mail to the admins asking them to undo it. I just wanted to bring you up to speed about what’s going on, since you had no way of knowing because of the way they arrange it. Hopefully they will respond to this request and unban you. I’ll let you know.

Anyway, thanks for contributing to r/Paleo (or trying to, at least!) and I hope this all gets resolved. I’ve enjoyed your blog for many years.

You get to judge.

You can Google around for shadowbanning if you like, but essentially, it’s a means whereby someone is banned, so their posts or comments or whatever don’t show up—except to them (uses their IP address and/or cookie to tell when they’re there). Given the perniciousness of spam, I can see a value to this—actually, far more so for trolls.

OK, since you get to judge, let’s take a look. Here’s a screen shot of recent submissions, from my primary Mac computer (click to open full size). 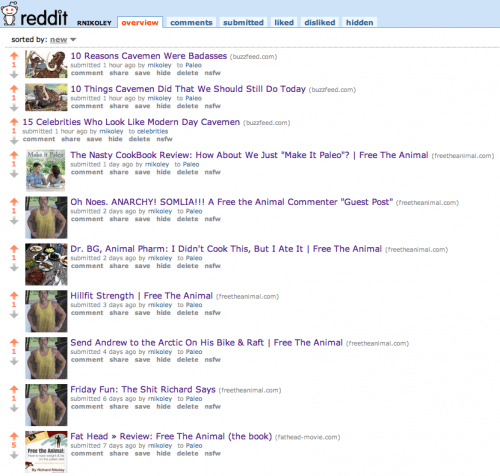 So one post did get a little action a week ago, but that wasn’t a link to freetheanimal.com, but to fathead-movie.com. Everything else has not a single up or down vote, or a comment. Now, I hate to get all haughty and shit—and just maybe all 10,000 people or Reddit neither love nor hate me, but are just indifferent—but that’s a bit odd, given I have 100K visits here a month, dozens of comments per post on average, and typically many social shares via FB, Twitter and the like.

Since I’m an entrepreneur and have technical means, I logged into one of my company servers in Modesto, CA via Remote Desktop, fired up Firefox on the Windows server and searched my username without logging in (click to enlarge). 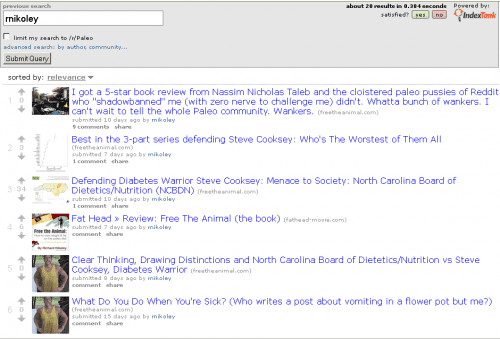 So, does that mean that anyone but me, coming from my own computer IP or with a Reddit cookie, that no one sees my submissions but me, specifically posted to the r/Paleo subreddit? Sure looks like it.

You get to judge.

I was all ready to drop a bomb on this and attempt to entertain as I sometimes do, but I couldn’t bring myself to do it. This is the community, after all—for one thing—but more than that, I simply do not know. I don’t know if it’s just Reddit algorithms that spam my stuff because it’s normally from the same URL (my blog), or whether there really is a group of cloistered individuals who want their own territory.

And since I don’t know, it can only go to you, as judge.