I can’t be sure this is the same friend I saw one night up in the metal awning structure in my backyard well over a year ago.

They all look the same.

But maybe the eye contact wasn’t just generic. He looked at me for a bit, as if to size me up, then scurried off. I went and got a fresh fig off the tree, placed it where he’d been, and the next morning it was gone. I repeated that scene many times.

Never did it occur to me ever, to attempt to in some way to eradicate the mice that live in my awning. They were only a nuisance ever once in over a year, but always gave me a bit of comfort & pleasure whenever I would hear them scuffle about a bit. I’m not starving, my dogs are well fed, the mice aren’t hurting anyone and by god, it just gave me a little joy knowing they were up there. Silly, if you wish.

…Beatrice took off on another “girl’s weekend” this morning, leaving me with the two Rat Terriers, as usual. And, it’s Friday. ‘Round 2pm or so, I hauled out leftovers from the fridge: ribs, smoked chicken, pulled pork. I hauled out a bottle, too. Zero carbs and whiskey. Good afternoon.

Then I noticed who I like to think is my longtime furry friend. He was just out from the edge, from under the grill, only a few feet away—but on the patio, not the awning. He was bunched up like mice typically are. He’s brown. He lived his whole life, up until today, totally wild; relying on his own survival prowess that few humans actually possess, anymore.

Once I moved, he scurried under the grill, but his tail showed. 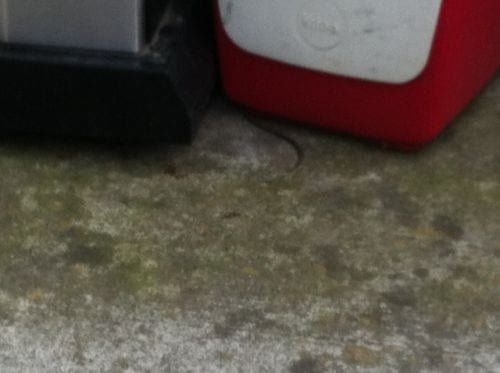 At this point I had no idea what was up. I probably ought to have taken note of the oddity of him being down here, exposed.

Nonchalantly, I got up, squared away to the kitchen, grabbed half a handful of my dog’s grain free and passible kibble food—Evo—and tossed it under the grill. Mouse didn’t stir.

I waited. Pretty soon, he came out into the sunshine again. But then, pretty soon, Nanuka (Nuke) my fierce bitch rat terrier showed up. She is absolutely vicious with squirrels and cats. She once got a squirrel in her teeth, wounded it, got blood on herself, and it got away. And she sniffed out this guy soon enough. initially got hackles up, barked, growled, and then…silence.

So now I have curious. I get on Twitter and after a few back & forhts with various followers, I decide to not interfere one way or the other.

Then I got bored.

I roll the grill in a big sweep, exposing the mouse.

It just sits there. Nuke takes notice, but rather than pounce as I would have expected, she approaches with great trepidation. She gets up close. It doesn’t move. She sniffs it all over. It doesn’t move…and she backs away.

It’s not prey: It didn’t bolt. It didn’t try to escape.

Well, I don’t know shit about it, but it makes me wonder. Obviously, predators go for the weak members, but perhaps not the sick? I suppose they could scavenge if hungry enough, but my mostly raw fed dogs, while super lean (because I fee them just enough and no more), probably aren’t hungry enough to go for something that doesn’t put up a fight. 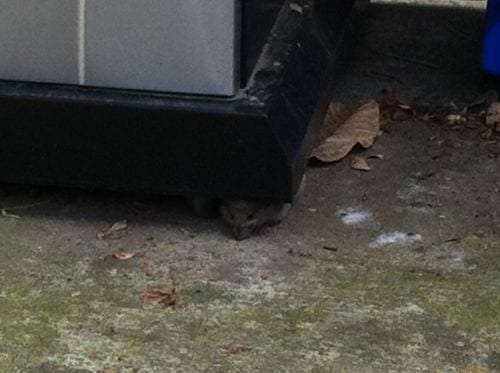 That was the scene only an hour or so later. He was dead. I got a paper towel, put him into a ziplock and so goes my furry friend—at least as I like to think of it.

Hopefully he left some offspring in the awning structure.