Peanut Butter in Sauce For a Burger?

First off, this might go better with chicken…but it was a spur of the moment idea, and I had burgers in the oven.

I’m not going to take the time to link, but I’ve been on the quest for the perfect burger—whether pan searing first, then finishing in the oven, baking first and finishing off in the pan, or grilling alone.

The latest attempt was to have relatively thin burgers, not pressed, but gently formed, in the oven at 275 for an hour. 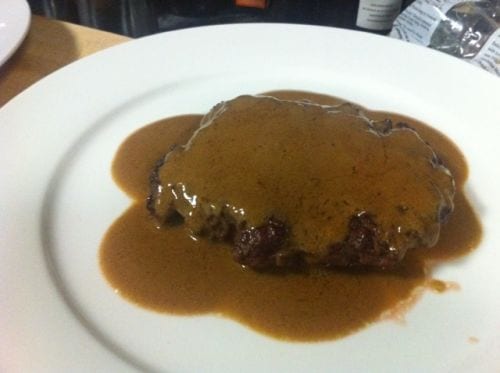 So after the oven, I got a lot of Kerygold butter going, then seared them, 30 seconds per side or so. Interestingly, the bottoms (where they we’re in the oven) don’t sear at all, but the tops, sear up nicely. Use lots of butter, get it hot but not smoking, then when you’re searing the tops of the burgers (sear the bottoms first), roll the pan so as to get the hot butter rolling up on the sides. You’ll figure it out. 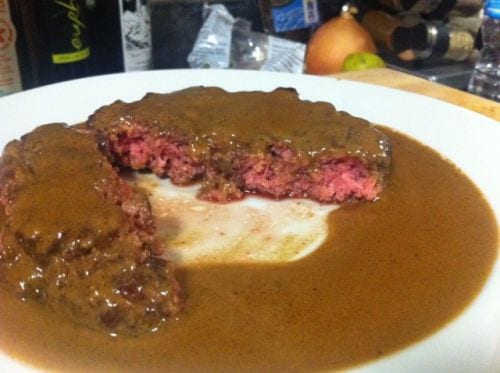 I think I’m probably going to be staying with the 275 for a hour and a thiner burger. This one was the mostly perfect by far. And just to reiterate, that is medium, not medium rare or rare. It’s the slow cooking that retains the nice color of you know what.

Sauce: It was about 1/4 – 1/3 cup Kerrygold butter, in which the burgers were seared. Then they go to a plate, back in the oven which is turned off, so just absent heat. I add about 1/2 – 2/3 cup Kitchen Naturals Beef Stock intermittently over time (my favorite, and 5g protein per cup, gluten free) to deglaze and reduce, then a large tsp of creamy peanut butter, more stock, a few dabs of balsamic for sweetness, more stoke, a bit more peanut butter….reduce reduce, a bit more stock….reduce….taste, turn off and let reduce naturally for a few more minutes.