~ While I often catch at least part of Ira Flatow’s Science Friday on NPR, here’s a segment I missed last Friday: Should Sugar Be Regulated Like Alcohol? Well, of course, the question tends to assume the premise: namely, that alcohol should be regulated. Sure it should, by any human being who consumes it, or their direct guardians. Same for sugar, or anything, really. So I guess what they’re really talking about is it being regulated by someone else who, presumably, “knows better.”

Whether you agree with that view or not, it’s not really what I find so overly important about this interview and to his credit—I suppose—Lustig seems to admit that this “campaign” is mostly to draw attention to the issue. It’s pretty starling. Perhaps review to a lot of you but I enjoyed it. About a 17 minute segment you can listen to right here.

Related to that is a new post up by Dr. Stephen Guyenet. Most sugar consumption graphs you see go only back to early 1900s but he extrapolated data from a couple of sources to get back to 1822. 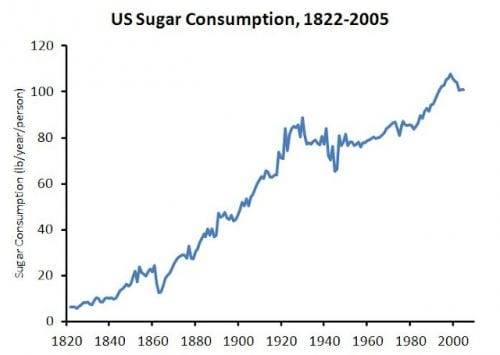 It’s a remarkably straight line, increasing steadily from 6.3 pounds per person per year in 1822 to a maximum of 107.7 lb/person/year in 1999. Wrap your brain around this: in 1822, we ate the amount of added sugar in one 12 ounce can of soda every five days, while today we eat that much sugar every seven hours.

He goes on to calculate—tongue-in-cheek, of course—that if the trend continues, by 2606 the American diet will consist of 100% sugar.

~ Commenter Razwell put up the link to this nifty 6-7 minute 20/20 segment on what’s predominately vegan orthorexia, along with a perfect poster boy for the movement. Watch out, women, that you don’t meet this guy and get all BWVAKTBOOMed.

Further to that, a great comment from Trish on veganism.

Talk to a vegan and this is what you’ll learn:

1. They are city dwellers or live in a college town. If you find a vegan in the country, they will still have been city-born or lived in an urban environment for a while but they want to be all crunchy and grow their own food. The chances of them having lived in New York, San Francisco, Portland, OR, Seattle or DC at one point or desperately wanting to live in one of those places is disproportionately high.

2. They are invariably under the age of 40. Every once in a while you’ll stumble across one in their fifties. You can tell because they look 70.

3. If they’re male, look for the vegan girlfriend standing close by. The power of pussy for male pussification purposes is very strong.

4. They are from the very least an upper-middle-class background and therefore have never known a day of true hardship in their lives.

5. They rarely eat actual vegetables. Their diets are filled with beans and soy and pasta and Amy’s frozen dinners. Maybe a bagged salad once in a while.

6. If they brag about their cooking skills their recipes are usually for desserts or some variant of pizza or fake meat. They also love their condiments–salsa, hot sauce, mustards, sriracha, etc.

7. They will blame any of their numerous physical ailments on genetics, age or the weather, even if they inadvertently let it slip that they hadn’t experienced an ailment before going vegan (this applies mainly to dental issues in my experience).

8. The younger they are, the more likely they’ve been raised by the first generation of parents who were told that their kid would shoot up a high school or not make it into Harvard if he/she were told “no” or was subjected to any sort of rejection, failure or criticism.

~ I’d always heard that Adolf Hitler was an animal lover and vegetarian. Perhaps that’s just vegan propaganda. Here’s evidence he was actually pro-Paleo, fooled by his own government.