Who’s The Worstest of Them All?

When I began my defense of Steve Cooksey the other day, contra the North Carolina Board of Dietetics/Nutrition (NCBDN), I wasn’t planning on writing a second post, yesterday. And then when I wrote that, I most certainly had no idea I’d go at it one more time today.

To begin, what do all the following assertions have in common?

If you catch the drift, then you see how I could go on and on with the same theme. The common fallacy in each of these claims is that they all assume the initial point, i.e., petitio principii or, Begging the Question. That latter phrase is often misused when, what is really meant is that something “raises a question.”

To further illustrate, here’s what’s wrong with each of those.

Now, beyond the logical fallacy inherent in each statement, they’re all additionally tied together by what I’ll term a meta-illusion: the notion that somehow, government affords some sort of magical Sooper Pow3rz, whereby when it’s called “government,” it suddenly ceases to behave as individuals normally do in collaboration; that, in essence, it takes on some endowed greater sense of discernment, character, and good will not possessed by “ordinary” individuals.

To introduce but one bugaboo into that notion, take Underwriters Laboratories, or UL. It’s a private safety standards & certification company, begun in 1894; and as near as I can tell, has collaboratively sought over these almost 120 ensuing years to keep safety standards so high for home appliances that no company would dare try to market an appliance without the UL tag stamped underneath.

No magic required; but rather, something manufacturers have enthusiastically supported because in exchange for the fees they pay UL for certification, they gain both marketing parity for their wares on the level of safety, as well as having something of a scapegoat if something goes wrong. (Note: I have no idea whether or not by today, that system has been corrupted, UL certification is mandated by law, and all manner of incestual stuff—that will only ever compromise quality assurance—has been introduced).

As I mentioned in my last post, some people took exception to my initial use the the German soldier analogy (loading Jews in boxcars, deaf to the voice of their own conscience). So if we accept for the time being that private groups can, under decent culture, leadership and standards, act as well or better than magical government, then how about individuals?

Ever heard of Stanley Milgram? I blogged about him, or wrote in various forums about him way back, but had not thought of it until a commenter brought him up.

The Milgram experiment on obedience to authority figures was a series of notable social psychology experiments conducted by Yale University psychologist Stanley Milgram, which measured the willingness of study participants to obey an authority figure who instructed them to perform acts that conflicted with their personal conscience. Milgram first described his research in 1963 in an article published in the Journal of Abnormal and Social Psychology, and later discussed his findings in greater depth in his 1974 book, Obedience to Authority: An Experimental View.

The experiments began in July 1961. Milgram devised his psychological study to answer the question: “Was it that Eichmann and his accomplices in the Holocaust had mutual intent, in at least with regard to the goals of the Holocaust?” In other words, “Was there a mutual sense of morality among those involved?” Milgram’s testing suggested that it could have been that the millions of accomplices were merely following orders, despite violating their deepest moral beliefs. The experiments have been repeated many times, with consistent results within societies, but different percentages across the globe…

Ordinary people, simply doing their jobs, and without any particular hostility on their part, can become agents in a terrible destructive process. Moreover, even when the destructive effects of their work become patently clear, and they are asked to carry out actions incompatible with fundamental standards of morality, relatively few people have the resources needed to resist authority. ― Stanley Milgram, Obedience to Authority

Basically, volunteers either answered questions or administered what they believed were electrical shocks for wrong answers, at the order of the guy wearing the white coat. Even as those being “shocked” pounded on the wall and complained of a “heart condition,” the simulated shocks continued…because, the shockers, when reluctant, were told by the white coat, in successive order:

It was only after all four admonishments went unheeded or, the maximum shock of 450 volts was “administered,” that the experiment stopped. While all participants administered at least one level of shock, 65% got all the way to the maximum 450 volt dose. …And prior to the experiment, Dr. Milgram polled his Yale colleagues and they predicted that an average of only 1.2% would get there (0-3% range).

The legal and philosophic aspects of obedience are of enormous importance, but they say very little about how most people behave in concrete situations. I set up a simple experiment at Yale University to test how much pain an ordinary citizen would inflict on another person simply because he was ordered to by an experimental scientist. Stark authority was pitted against the subjects’ strongest moral imperatives against hurting others, and, with the subjects’ ears ringing with the screams of the victims, authority won more often than not. The extreme willingness of adults to go to almost any lengths on the command of an authority constitutes the chief finding of the study and the fact most urgently demanding explanation. — Stanley Milgram, The Perils of Obedience

So much for the moral fortitude of the average individual when subject to the culture and authority of the state. And that’s average, folks. How much more pronounced might it be for those actually employed by such magically endowed authority, where their livelihood rests on continued employment?

So now let’s turn our attention to that magical entity, the state itself. …That’s when by collaborating under the supreme authority in the land, individuals somehow, without explanation, become someone other than those 65% willing to electrocute their fellow man because someone in “authority” admonished them to do so.

Or do they? Ever heard of Rudolph J. Rummel?

Rudolph Joseph Rummel is professor emeritus of political science at the University of Hawaii. He has spent his career assembling data on collective violence and war with a view toward helping their resolution or elimination. Rummel coined the term democide for murder by government (compare genocide, his research claiming that six times as many people died of democide during the 20th century than in all that century’s wars combined.

So what’s the toll? His main area of research is on the 20th century. But what’s to take note of, is that democide excludes death as a direct cause of war.

You can go down as many rabbit holes into his research as you like, here: Death By Government.

While not included in the figures as they don’t include war deaths, the American Civil War killed about 620,000 people.

To backtrack a bit to that distinction between totalitarian regimes and democracies, I find it odd that people in democracies seem to attribute those hundreds of millions of deaths overall to singular personalities. Well, Genghis Khan, Hitler, Mussolini, Stalin, Mao, and Pol Pot could not have together killed all of those people had they slit throats every waking moment all their lives. In fact, they personally killed few, if any people their whole lives. I refer you to Milgram, above. Get it?

As just a further steam of conscience:

Actually, we are one of the world’s biggest incarcerators, mostly black, poor, generally defenseless—except for the public defender who works for the same institution attempting to prosecute him. 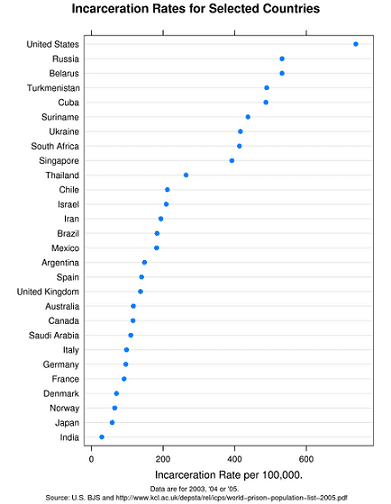 “Land of the Free”

It is to laugh.

So I can imagine that many who’ve even gotten this far might be thinking or saying that I’m just doing my post I do every now and then advocating the anarchism I advocate. That’s really not the case. I’m an individualist, willing to take my chances, let the chips fall were they may in a life which, no matter how you slice it, is a gift from the Gods of evolution anyway. What I’d like, simply, is for people to be a bit more skeptical of the magical powers of government.

So let’s review, from the beginning, my position on all of this.

You simply have no recourse. You educate, inform, and then trust yourself to get through life, or you choose to be a cog at best, a pawn in someone else’s scheme, at worst.