Well, I had no idea that when I hit publish last week—Synthesis: Low-Carb and Food Reward/Palatability, and Why Calories Count—that it would turn out to be about the most popular post I’ve ever put up, beating out my original post on the no soap or shampoo experiment in numbers of comments. Comments number 619 as I write this! On Friday, I recorded a podcast with jimmy moore that airs tomorrow, 3/6. This topic was a large part of the conversation (as well as the perceived widening divide between paleo and Low-Carb folks). Finally, Angelo Coppola covered it in the Paleoland segment of his Latest in Paleo podcast that went up just today (begins at 43 minutes into the program).

Wait, I must have missed something. I didn’t see any references at all and any information contradicting Gary Taubs’ work…

I replied that I figured everyone was just as capable as I to go to Google Scholar and PubMed to cherry pick their own set of references that support their biases, whatever they may be. While I have no problem taking a study and trying to pick it apart, or indicate why I think it makes sense, I often don’t really like trying to build up a big list of references for my posts, because my posts attempt to be some synthesis primarily designed to get you to connect dots and think. I like to take on an idea and think about it on my own, then tell you what I’m thinking.

Now why can’t all the others who doubt food reward get it too?

It’s not about magical insulin or “spikes” of any kind, or fat being locked away somehow.

This is definitely one of the best posts ever explaining how LC works in layman’s terms, and how you can make it work even better.

What I have found surprising is not only the resistance to the idea of Food Reward but a seeming difficulty on the part of many to grasp what the idea is really about. And then there are those like my friend J. Stanton, who think an exhaustive, precise set of ideas and concepts needs to be defined and differentiated in order to avoid fog and confusion. He put up a comment as well, and also has a multi-part series on his blog, Gnolls.org: Why Are We Hungry?

Then of course, there are Stephan Guyenet’s posts on the subject, and in the skeptic’s corner, we have Sean Abbott at Prague Stepchild: Deeply Skeptical of Food Reward Hypothesis Pt. I: Playing Gotcha.

I have a confession to make. Beyond reading perhaps Stephan’s first couple of posts on the idea which was new to me, it struck me as simply too obvious to spend much time looking into all the ins & outs, and so I don’t believe I’ve read much if any of all of those other links. I barely have enough time to write posts here and tend to comments. So I considered reading them in advance of drafting this, but I think I’ll just wait at this point and check them later.

In my view, the whole general Food Reward idea contains roughly the following components (could be more; this is off the top of my head):

I think some of the confusion or misunderstanding I’ve seen on this topic comes from the notion that a limited view of palatability is the only concern. Gary Taubes, in his objection to Stephen Guyenet at AHS fell into this mode of thinking when he asked Stephan how a drink wasn’t palatable and could be considered bland, since is had sugar in it.

The easy answer to that is… I don’t care how much sugar you put on a steaming pile of dog shit… There’s a number of components to FR, palatability being only one and even palatability has a number of factors like smell, texture, temperature, mouth feel and so forth. Think in those terms and it should be pretty easy to understand.

The other confusion comes into play when Paleos and foodies go out of their way to make good food highly palatable (believing that falsifies FR). And they do, with various recipes, sauces, herbs & spices, and so on. And yes, many of those sorts of “home engineered” foods can be a big factor in getting people to overeat. Think home made apple pie. The difference was, baking home made pies was a lot of work so there was the trade-off (which applies to our paleo concoctions as well). Now people have a half dozen frozen pies in the freezer, just a nuking session away. On the other hand, no matter how enticing a one-off home cooked meal is, gaining fat from chronic overeating is not a one meal affair. But imagine if your favorite meal was at all times in your fridge, freezer, a drive through or available for delivery. Well, that is the situation for many, unfortunately.

So getting back to my list, Food Reward, to me, is when several or all of these factors are in play (and maybe other factors I haven’t thought of). And this is why I like the dessert metaphor to roughly describe food reward: you always have room for dessert. Notice how people often say they’re “saving room for dessert.” No, they’re not. They’re stuffed silly and can’t look at another bite of mashed potatoes, turkey, gravy and stuffing (no pun intended). But they’ll still have a liberal slice of pumpkin pie with whip cream on top.

Think Lays potato chips, or Pringles. You can’t eat just one. Not only that, they’re not very filling, satiating, even though calorically dense. So you’re going to eat more of something else once the bag or can has been dispatched.

Think sugar drinks. No matter how stuffed you are, taking on some sweet liquid is pretty easy. 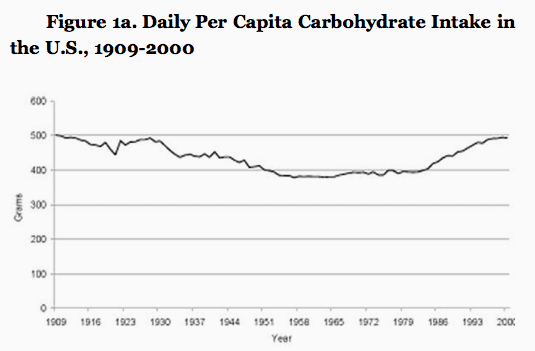 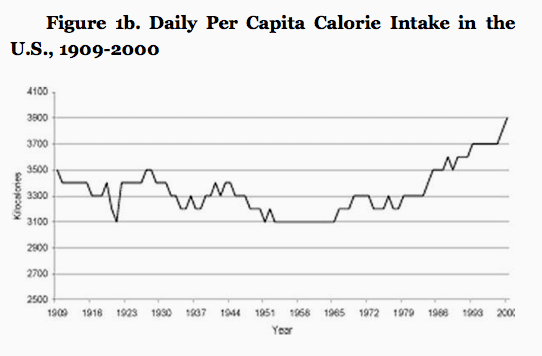 In other words, one hundred years ago the average worker was physically active; the average worker today spends most of his/her day seated or engaged in very light activity. Today, people eat more calories, move around less, or both, as compared to a century ago.

Tell me again how it’s all about the carbohydrates, when carbohydrate has been 400-500 grams forever already? It’s interesting also to observe the graph for caloric intake and watch it decrease from 3,500 down to 3,100 by the 1960s. And what was going on during that time? An industrial and information revolution that had fewer and fewer people doing manual labor and more and more doing office type work, as Colpo points out. And that trend has only continued, in the face of caloric intake increasing from a low of 3,100 in the 60s to 3,900 by year 2,000. Why?

Here’s another factor that I think would fall under the category of food reward. Colpo describes a few studies that demonstrate how people will eat far more of any given identical thing if they believe it’s somehow “good” in dietary terms (low calorie, low fat, low carb, low cholesterol, etc.). Do you recall the Seinfeld episode, where they all pigged out on “no-fat” frozen yogurt and all got chubby? Turns out it wasn’t no-fat, or even low fat, but that’s not the point. They though it was, so they pigged out on it, just like low-carbers do all the time because they erroneously believe there’s no problem so long as carbohydrate is low or non-existent.

And so, in the early 70’s, with government dietary guidelines kicking off, there was suddenly now all sorts of things to market (low calorie, low fat, low carb, low cholesterol, etc.). And people, eager to obey the diktats of their benevolent leaders, stepped up to the troughs the food giants were only happy to engineer for them.

The good news is that from here, there’s a pretty easy way out. Since we know that we have to eat fewer calories to lose fat, and there are some foods that seem to entice us to eat them even if we’re not hungry, it’s merely a matter of usually avoiding those foods. Of course, for paleo folks, most of that is already baked into the cake, by virtue of our elimination of grains, refined sugar and vegetable/seed oils—pretty much what all the biggest problem foods are engineered and concocted with.

However, there are a few paleo approved foods people ought to be mindful of. At the top of that list: nuts, particularly roasted & salted. And this would go for all the “paleo” baked goods as well, many made with nut flours. I endeavor to almost never have nuts in the house, anymore. And how about bacon? I see folks joking all the time about how much bacon they put away, which is fine so long as balanced out elsewhere. While not strict paleo, dairy is another category. Ever have one glass of ice cold whole milk turn into three glasses? How about way overdoing it in the butter drenching department (or coconut oil/milk)? And shall I mention the worst offender of all: cheese?

But fortunately, it’s a pretty short list. Most people are already mindful of this or, their appetite mechanism has become so normalized over time that they’re just not as susceptible to food reward as before. Moreover, the nutritionally dense quality food we do eat tends to be highly satiating, a factor lacking in a lot of modern foods that only exacerbates matters in the context of food reward. We all seem to be able to go have our favorite cheat meal like a burger or pizza now and then, and not have it send us into the abyss of chronic daily overeating.

In the end, who cares whether “food reward” qua science is valid or full of shit (I don’t suspect for a second it is)? The fact remains that everyone knows damn well that there are poor quality processed foods that 1) you have a hard time stopping until there’s no more left (and I’m not talking about finishing your grassfed ribeye) and 2) that you seem to have room for no matter how little or no room you actually have. It’s really that simple.