While “femmes importantes” are now setting their sites on the “sins” of the great Robert Lustig…because, hey, that’s what happens when you have no value to add to anyone, pretending instead you offer value by tearing down value…I’m off on a different track, and will continue to do so. It was fun engaging the cunt while it lasted…. Onward.

Right across the street and on the corner opposite the main gate of the Yokosuska Navy Base—on the peninsula quite a bit south of Tokyo—is a shop that does about the best finely ground black peppery chicken or shrimp fried rice I’ve ever had—that they prepare on the skillet in front of you and its fun to watch how the egg gets integrated; and in fact, though I don’t know the recipe, lots of finely ground black pepper has always been essential for good fried rice, for me.

…But when you wander back, drunk & tired…at 1am or later, maybe you want a corn dog instead…and they were set up for that, for the totality of the 5 years I had there, in attendance in the latter 80s. They had an window to the street, kinda like convenience stores that’re open late now—only for different reasons.

My only problem was that whatever dough recipe they used, it was inferior to what I knew as a kid…that with a solid, unmistakeable outer crunch and thin bread between…and then the mustard. If you put catsup on your corn dog, you’re going to Hell. Sorry. I can’t save you. You’re lost, irredeemably. So, yea, that crunch thing and thin breading was replaced by a decidedly more doughy feeling and soft outer layer, necessitating the prerequisite of being somewhat drunk first. …Inebriation doesn’t only make ugly & fat girls pretty.

I have solved that little dilemma, however, in a Paleoish way. Crunch is paramount. 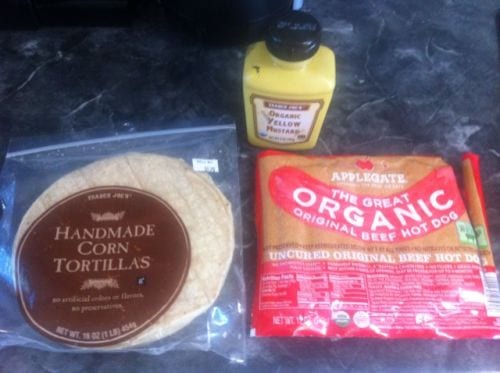 First, 3 and only 3 ingredients, and I don’t give a fuck about your kitchen sink concoctions

You can grill or otherwise cook your dog, but for ease, I have found that 25 seconds in the nuking machine gets the right balance of warn out of the fridge, little to no fat being wasted by pouring out on the plate. 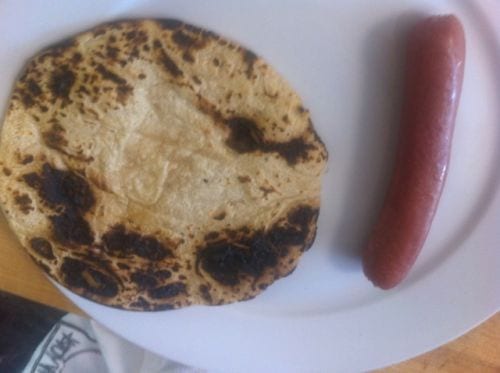 You must prepare the tortilla properly. Crunch. Use the gas stove

If you don’t have a gas stove, you can do it with en electric directly on the burner. Just turn it almost constantly and keep the setting at medium low. Takes more time and attention, but doable. If you do your tortilla in some sort of oil, microwave it, or whatever fucking stupid thing you might have in mind, well, you ought to got straight to hell, along with the catsup-corndog abusers. I have no use for you in my increasingly small universe. 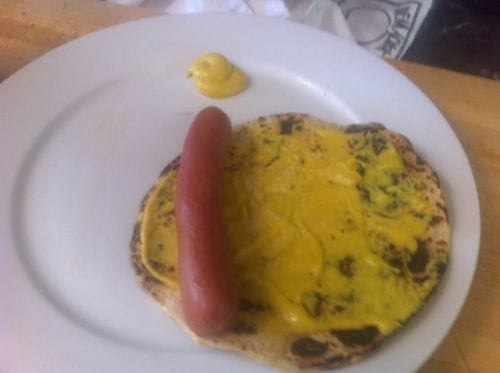 A dolup of mustard on the side, just in case

Then, you eat it, of course. 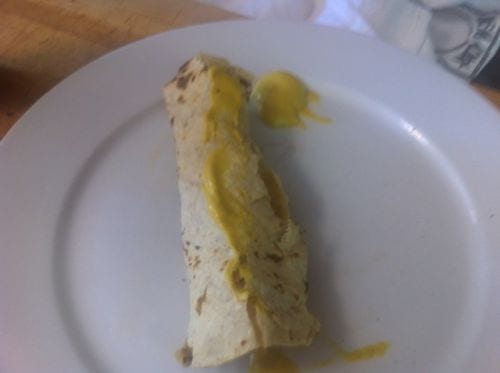 If the tortilla doesn’t crack, it’s not crunchy enough and you’re lost. Just lost. Comment in, and I’ll try my best to save your soul from eternal damnation, in spite of the fact that’s what you really deserve.

…But I’m a sucker for redemption.