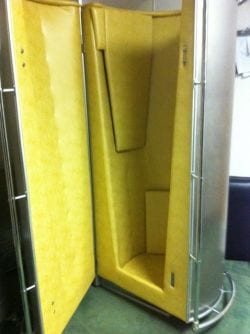 Not really. It’s so surprisingly easy to do. and Tore Gustafsson from Sweden says he treats people in their 80s. My initial reaction? Drugs are overrated. I still like my cold water dips of course. This is simply another tool in the toolbox. I’m about 30 minutes out of the chamber and continue to have just an aura of well being that seems to even be increasing. The effect is supposed to last for quite some time, ramping up metabolism, with a calorie burn in the ends of between 600-800 kcal per session.

They are purported to be cumulative, in that it trains your body to run at a higher metabolic rate 24/7, with regular sessions. 2-3 per week for a few weeks, then backing off to once per 7-10 days according to Tore. He’s a way cool guy, by the way.

I’m not going to divulge Tore’s prices, because I don’t want to muck stuff up for any other small businessman out there, or for Tore. Negotiate your own deal.

So, he shot a video of part of the deal.

Alright, find one in your local area if you can. This one is Viking Performance in Los gatos, CA.

…Alright. I have to get ready. My brother arranged for a limo from his place in Sunnyvale up to San Fran, to visit two of world renowned chef Michael Mina’s places; first RN74. Then we’ll go to Michael Mina—namesake restaurant—where I’m told both Michael Mina and Jeremy Tyler of the Golden State Warriors will be joining us for dinner.