If you dind’t have fried egg sandwiches as a kid, I’m sorry to say that you will probably never, ever be up to the task of understanding all the Secrets of the Universe. It’s simply a prerequisite.

…White bread, mayo on both slices spread liberally so as to ooze, an egg fried in butter—yolk broken and flipped—a dash of salt and lots of finely ground black pepper, left to cool down to warm, a slice of cheese is optional and totally appropriate now and then…and then finished off with enough catsup to ooze out along with the mayo.

Back in the Navy, and being always in WestPac and thereabouts for my first 5 years, we ended up in Pusan, Korea often enough, for R&R. Probably about 15 visits for me. What do I remember almost the most? Fried egg sandwiches. $1 each (mid 80s). They used hamburger buns, but there was nothing like coming out of the bar scene at 1 or 2 am, and smelling that cart.

But what to do now? I only eat bread as an infrequent indulgence. Well, some time back Bea and I incorporated quality corn tortillas. I may have blogged about it but I forget. Neither of us has any issue with them and the thing is, now we feel pretty free to go out to mexican because we so like the corn, I don’t think either of us has even been tempted to have a flour tortilla in a long while.

But I get quality ones, whether from Trader Joe’s or Whole Foods. Often, it’s just organic, sprouted corn, filtered water and lime juice. That’s it. 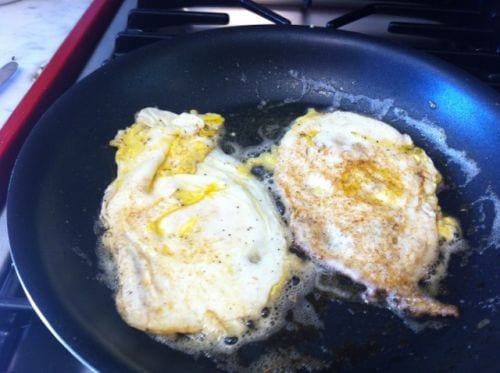 Fried in butter, break the yolks and flip 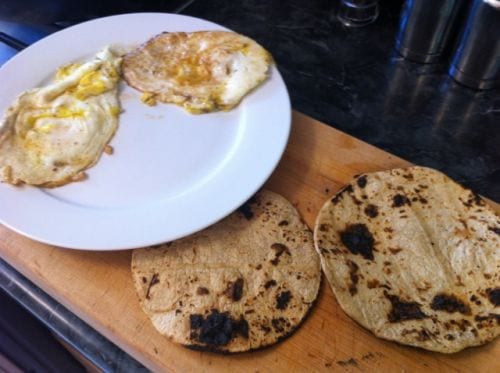 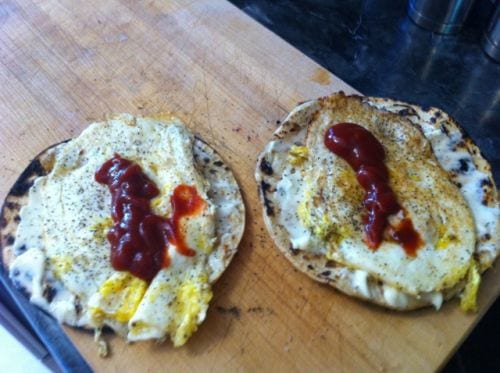 Mayo on the tortilla, egg, black pepper and catsup 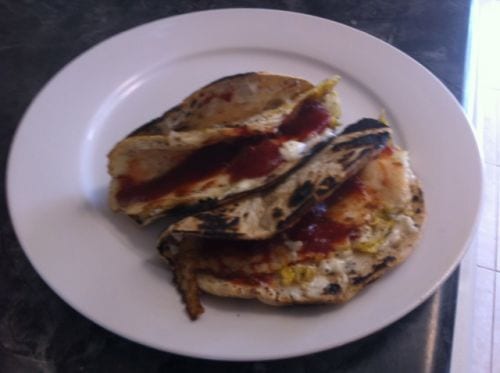 Alright, so no, I don’t bother to make my own mayo or catsup, anymore. Tradeoff: it sucks. I use Trader Joe’s. Their mayo is “organic” canola, whatever the fuck that means. What it means to me is that a single jar lasts me about 4-6 months. Same with their organic catsup with no HFCS or a 2″ long list of unpronounceable ingredients. Your mileage may vary. If it serves your time and interests to make your own, go for it.

But, consider that in making your own to exacting Paleoish standards—I’m sure—might make you worse off, because you might end up eating a whole lot more mayo and catsup (overindulgence because it’s doctrinal) than we do, or that you ought to…

This isn’t an everyday thing. I just discovered this, and when I do that, It’s overindulgence for a week, getting better after two, and a now and then thing after three.

Now just wait. Soon, I might show you the most absolutely delicious corn dogs you’ve ever tasted. And they beat, hands down, a deep fried one. If you imagine, you can probable get where I’m going.