This is the post I was planning on drafting for last Monday when disaster struck, and I simply decided immediately to put everything off for a week that I was doing and had planned.

I’ll start at the end, since it’s the newest thing. A month or so ago I first began to blog about Cold Thermogenesis (CT), followed it up with another, and then just shy of a month ago, renewed my own experiments with my own 150-gallon backyard tub.

There’s also been a few others I’m aware of who’ve weighed in on the issue:

And so, from April 9th until now, I’ve been in the tub most days (perhaps 5-6 days I haven’t been in and 3 of those were because of being out of town). I’ve tried not to make a big deal about it in terms of water temperature or time. At first, I set two 5-gallon buckets of water in the box freezer and then used those to bring the temp down. 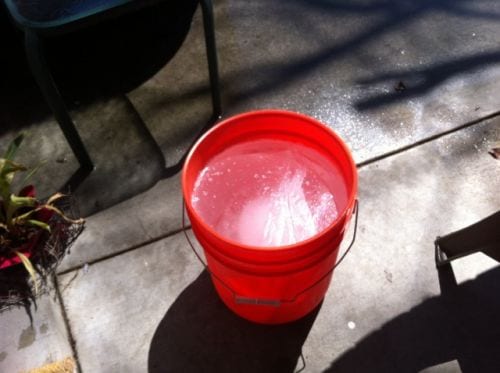 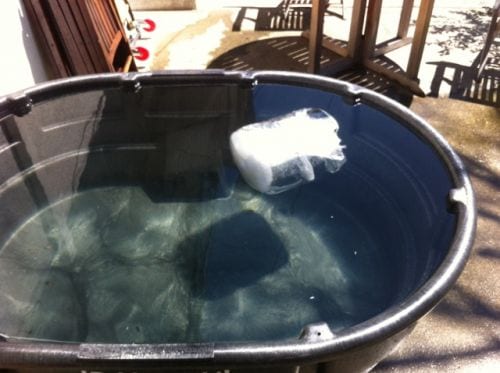 Thing was, I’d been away for nearly a week (used an unheated pool at one place for 2 days, temp ~60ish) and so had no idea how long it took to freeze 10 gallons of water solid. I used both of them upon my return to get that water down to around 50. I refilled the buckets and more than a day later they were still not solid, which I didn’t know until I put them in the tub and when the ice slid out, discovered that the wall thickness of the ice was only about a half inch (though the water pocket inside was very cold).

So, besides just the pain of having to refill those buckets and wait, it’s not very feasible anyway—and I’m just not the sort of person who’s ever going to go buy bagged ice to dump in the water. Time to rethink.

First step was to get the tub out of the sun, so I drained it and moved it under the patio cover. This worked well. I can refresh to some extent each time with the garden hose that’s running about 54 deg right now, or drain entirely and refill, which is good for the lawn anyway. Refreshing it each day is also nice for skimming off the dust floating on the top, as it just runs over the side.

We had some hot weather and it got up to around 60 or more, but with cooler days recently, it was down to 52 yesterday. Today it got to 90 outside, but this evening the tub had only reached 60. So, to sum it up, I’m going to go with whatever the tap temperature is, year round. I figure it’ll be under 50 for all of the winter months solid, and at height of summer, somewhere 65-70 at most and maybe even less on a refill.

This is plenty good enough. Having it outside for the evenings when the temperature dips helps a lot. It also must be noted that I get all the way in, right up to my mouth; but if I was in a bathtub, no way to do that. And I’m not the slightest bit interested in packing myself in bags of ice. So, again, what’s better? Colder, but not fully submerged; or a bit warmer, variable temperature but all the way in? I think you know where I see the tradeoffs shaking out.

In terms of time, it’s been as little as 15 minutes and as long as 35 with the average probably falling in the 20-25 minute range. I was not aiming for any specific results, yet, but rather to simply get used to doing it nearly every day and making it a habit that I’d enjoy, and that has certainly been the case. Today, for instance, I was over at our swim club and did a 30 minute light, leisurely swim in water that’s likely somewhere in the 70-75 range. And just a few minutes ago, after dinner, I did 15 minutes in my own tub.

…I have obtained one very specific result. I’m a bit hypothyroid and have been for years, with elevated TSH, but low normal for both T3 and T4. The only symptom I suffer that I’m aware of is cold hands and feet sometimes. Well, and this was pretty amazing, but from my very first session almost a month ago, 26 minutes at 52 degrees, I have not experienced cold hands or feet a single time. Not once. In fact, I sometimes feel as though I’m radiating heat off the palms of my hands and soles of my feet. Weird.

Other results include phenomenal sleep and a general sense of having a far wider comfort zone for whatever the ambient temperature is. I’m comfortable when it’s 60 deg in the house when I get up, and comfortable now, when it’s 77 inside the house. And I didn’t even know it got up to 90 outside today until I saw the temp while in my car.

The strangest, most counter-intuitive thing I’ve experienced, however, is this: 60 degree water is colder than 50 degree water. Of course, what I mean by that is it feels colder and I feel colder faster, shiver sooner. At 50 degrees, I have no problem staying in for 30 minutes, feel warm for the first 10 minutes, and don’t begin feeling really cold until about the 20-minute mark. At 60 degrees I begin feeling really cold in the 10-15 minute range and at 20 minutes I’m really itching to get out. My speculation is that 50, and perhaps even down to 40 (which I used to do at the gym), is a “sweet spot” where your body mounts a bigger defensive response and thus doesn’t feel as cold as quickly as 60. The takeaway for those experimenting with this—dipping their toe in the water as it were—is if you don’t get the water down to 50, you may feel as though you can’t adapt, and give up.

Calories absolutely count. I can’t believe I ever fell for the Low Carb Myth (LCM) that they don’t. Don’t get me wrong, though. I don’t see anything wrong with being LC if that’s what you like. In fact, and get this: cold adaptation via CT may just turn out to be the grand unifying theory for how to make LC work for you without having some of the problems people report (such as cold hands and feet). A paleo LC diet is very satiating—since it replaces empty calories with nutrient dense fat and protein. CT isn’t going to do any magic, but it is going to make you burn through a few more hundred calories per day, and if you can manage to not feed your face more, you just may break through that LC plateau so many hit at about 20% body fat (more for women).

But as with CT above, I want things as simple and natural as possible. I don’t want to count, I don’t want to do nutrient breakdowns. Rather, I want to eat a varried diet and not worry about eating starch or not eating starch. I want to eat paleo and eat what I want, when I want. And throw in dense nutrition often, like tonight’s meal: liver and sautéed kale (with onions, bacon, garlic and sprinkled with vinegar). 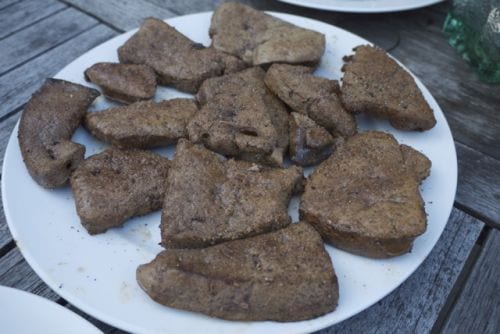 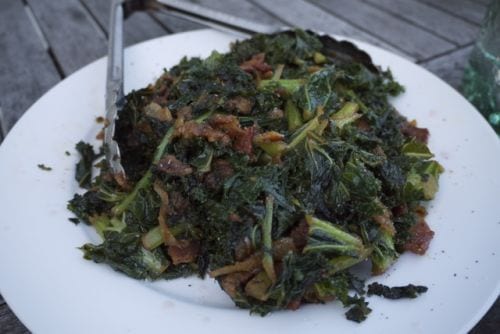 While I’ve done some form of resistance training all along, and even the Leangains protocol, I’d never done much but some kettlebell swings and presses at the gym I used to go to. A week or so after getting my tub in the backyard, I got these: 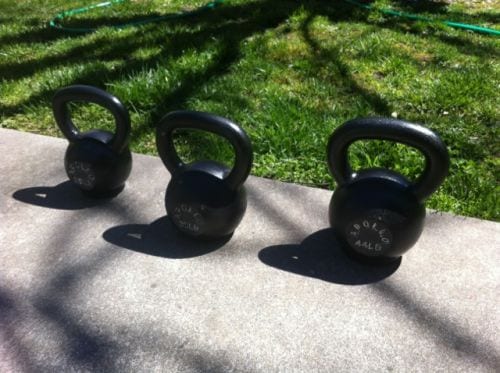 There’s a 26, 35 and a 44 pound bell and I really love them. Mostly, I’ve just been having fun with them in a totally random fashion almost daily. Could be for a couple of minutes, or 5 or 10. Little to no structure. One of my favorites is simply standing straight up, feet together, hands at sides, and with the 44 pounder, simply begin swinging it around your body, switching hands at the front and the back. Do it clockwise 10 or 20 times, then the reverse. First time I did it, my biceps were more sore than 2 sets of curls at 95 pounds. And, my traps and delts got a workout too.

I’ll probably be getting one in the 70 pound range soon.

I’ve mostly been doing the Leangains fasting method for quite a while now, most days, and mostly just because I usually don’t feel like eating before 11 or noon anyway, and am usually done eating by 8 pm. Martin Berkhan & I never did get to that post on fasting, but of course, I have tons of posts on intermittent fasting going way back, including doing my workouts in a fasted state.

Beginning a few hours ago I began the first full, no-shit 24-hour fast I’ve done in some time.

Putting It All Together

The last month has been a lot of experimenting, particularly with the CT and the Kettlebells. So now it’s time to put all the foregoing theory into integrated practice. I’ve got around 20, maybe 25 pounds of fat to lose, still, so this will be a 10-week program I’m embarking on, with the aim of dropping about 2 pounds per week. Here’s how it’s envisioned now, but I may adjust things as I go: