Help with v2 of the Free the Animal Book

Because of being a consistent best-seller for Hyperink since publishing my book last January, I’ve been approached to do a “Version 2” of the book. 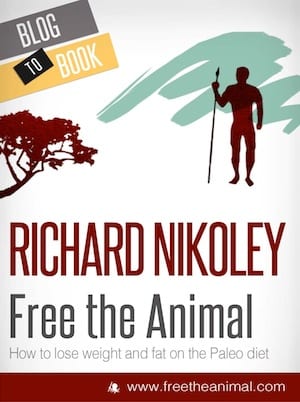 As you can see, the cover has already been changed—this, in response to reader feedback. This is why I went with this publishing start-up in the first place. I wanted to write only one book about “paleo,” and I wanted the easy and fast ability to keep it fresh and relevant as my own thinking evolves, as things change, as new information is incorporated into the general paleo landscape.

So we’re now on that task. Here are some posts since the publishing I think could be relevant in whole or part, or a sentence here and there, or even a change in threads:

So there’s the “short list,” posts since sometime in December when work on the book began, inspired from all paleo posts on the blog to that point. Of course, I don’t really expect readers to go through those to advise me this way or that way (though anyone is welcome to do so). In fact, the list serves as a repository for the editors to go through and incorporate into the book as changes, additions, corrections…in short, continuing evolution.

You can help by posting comments about what you might want to see added, removed, edited, expanded, or whatever else.

As always, this book has one solid goal: be the absolute very best intro into the paleo diet and lifestyle out there, constantly fresh, new, relevant. I figure that’s how I serve my readers, commenters and the general public the best. Nobody familiar with all this really needs another book that much. What you need is the best book to give or recommend to folks who are curious.

Update: Well this is timely. A very nice review of the book from Steven Gray.

Writer, blogger and entrepreneur Richard Nikoley is one of the more colorful and unique characters in the paleo blogosphere. He and I are very different people and I don’t agree with him on everything by a long shot. The posts on his blog, Free the Animal, are blunt, confrontational, often delivered with unabashed profanity…but they are also downright entertaining. His take-no-prisoners attitude, especially pronounced when met with stupidity or bad reasoning, often provides much-needed doses of reality for the paleo community, whose information-cycling bloggers often seem to exist in a grass-fed and organically-pastured netherworld of online pontification.

Go take a look at the rest.