Yesterday I posted about how well it’s going with the book and its 2nd Edition. Here’s an excerpt from Chapter 3 on grains, vegetarianism, veganism and a bunch of nutritional comparisons. This is first draft stuff, so it has yet to go to the editor or proofreading. Those who read the first edition will notice this section as being tremendously expanded.

Even when not considering the problems with grains in terms of gluten, and other lectins, be aware that they are not very nutritious.

Listen, everyone, and listen closely: if you eat grains as a significant part of your diet, you are getting CRAP nutrition as compared to a Paleo-like diet. It’s simply a fact, the “healthy-whole” fraud notwithstanding. And if that’s not enough to convince you, then ask yourself why virtually all grain products have the word “fortified” stamped on the package. Good nutritional sources need never be “fortified.”

How about a visual representation? What if we compared the nutrition in an average loaf of bread (about 1,400 calories) to say, the same number of calories of beef liver and salmon?

Don’t look just at the height of the bars, but at the numbers at the top of the bars. A bar at the top means “off the scale.” Examining the numbers gives you an idea of how proportionally off the scale each nutrient is relative to the same nutrient in ”fortified” bread. For most micronutrients, a paleo diet outstrips a standard, grain-based diet by 100–300% in terms of nutritional content. The livers of all animals and fish are nature’s true “multi-vitamin.” For a more thorough look, see my post at Free the Animal that incorporates these images.

Let’s run the actual numbers above, comparing 1,400 calories of bread to the same amount of beef liver for the 21 different nutrients listed. On average, for bread—adding up all the numbers at the tops of the bars— you get average nutrition across the 21 nutrients of 85% (1,777 / 21). That is, if you eat the entire loaf in a day, you’re still 15% under the government’s established recommendations.

Now let’s have some fun with the liver: 2,640%! No, that’s not a typo: Two Thousand Six-Hundred Forty Percent! (55,403 / 21), almost 25 times as much nutrition as the bread. Think of that the next time you hear nonsense about “superfoods”—and it’s always some silly berry, or leaf, or something else that while decent, never holds a candle to animal foods in terms of nutrition. When is that last time you heard of any animal food being referred to as a superfood in any mainstream outlet? Probably never. That’s how backwards everything is and just another example of what you’re up against.

Want another example? How about raw oysters on the half shell, which I happen to love. Thing is, it’ll be tough for you to get 1,400 calories worth. In fact, 24 raw oysters, a large serving indeed, has only 230 calories, 1/6th of that 1,400 calorie loaf of “fortified” bread. But guess what? in that 230 calories you’ll find 400% of the USRDA for those same 21 nutrients in our comparison. So, one-sixth the caloric energy, almost five times the nutrition!

So how about if we compare a relatively nutritious plant food to bread? Potatoes are just such a thing. Sweet potatoes are slightly more nutritious than plain white potatoes, so let’s use those. Another thing about potatoes in general is that they’re gluten free, unlike bread, but—depending on the variety—can have 10—13% protein and it’s a quality amino acid profile; whereas, the tiny protein in bread is virtually all gluten, a big problem for increasing numbers of people. One large sweet potato (excluding any garnishes like butter and not eating the skin) will provide you with 200 calories, one-seventh of that loaf of bread. But the nutrition over those 21 nutrients is 25% of your USRDA. Yes, one potato per day gets you 25% of your nutrition. If you were to eat seven of them—in order to match the caloric energy of the bread—you’d get 175% of your USRDA, or exactly two times the “nutrition” in the loaf of bread. …For centuries, potatoes have been considered a poor man’s food, yet their nutritional density is such that eating only half of an average male’s daily caloric requirements gets you twice your recommended allowance in vitamin and mineral nutrition! Bread is the true poor man’s food.

What About Vegetarianism and Veganism?

First, it’s important to draw a clear distinction between vegetarianism and veganism: vegetarians traditionally consume nutritionally-dense animal nutrition in the form of eggs and dairy. Vegans do not. Nutritionally, this makes a world of difference. Either you consume animal products or you don’t, and that’s the real distinction to understand.

Some vegetarian societies, such as India, have thrived for millenia, but there has never been any such thing as a vegan society. A fruit-based, raw vegan diet that excludes all animal nutrition is only theoretically possible in narrow, niche environments, such as a rain forest. I say “theoretical,” because even supposed primate herbivores are omnivorous. They eat bugs, worms, grubs and termites, and sometimes turn to actual predation and eating of other primates.

You’re already familiar with the nutritional comparison of bread versus animal nutrition and even potatoes. But how about fruit? While fruit is indeed a paleo food, is it suitable as your only food? Some people think so. So let’s see.

The blog post in question was the result of a live Internet debate I had with a raw fruitarian vegan in April of 2011, with 1,000 people listening in on phone lines and many others streaming live over the internet. During that debate, I issued a challenge to vegans: compare a meal of just fruit to a meal of just beef liver, nutritionally. One vegan took up the challenge and this was the result: Nutrition Density Challenge: Fruit vs. Beef Liver. The comparison took place in two parts. The first part sought to find out how much raw fruit (various, mixed) would be required to roughly equal the vitamin and mineral profile for only 4 ounces of beef liver. The answer is that it took 5 pounds and 850 calories of fruit to roughly equal the nutrition of 4 ounces and 150 calories of beef liver!

But who eats only 150 calories for breakfast? What happens if, in addition to the liver, we add a sweet potato, some eggs, and a little fruit, in order to get up to equivalent 850 calorie meals?

The charts below represent the overall nutrition over 21 nutrients with the vegan, raw fruit meal on top and the omnivorous meal on bottom. 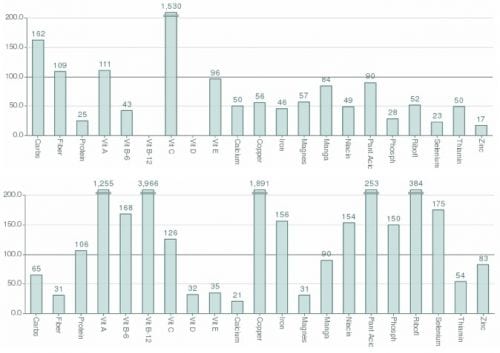 Again, look at the numbers at the tops of the bars that are off the chart in order to judge the real relative comparison. As with our other nutritional comparisons, here’s how these meals stack up:

Yes, indeed, in the fruit meal there are only 4 of the 21 nutrients that provide 100% or more of the RDA, but 3 of those 4, just barely (vitamin C being the only one off the scale). So in essence, a single nutrient at 1,500% of the RDA skews the whole analysis pretty badly. If we were to take vitamin C out of the equation and just average the other 20 nutrients, the fruit meal provides only 57% of the RDA. As you can see, however, we do not have nearly this same problem with the omnivorous meal, because 12 of the 21 nutrients are over 100% and of those, 5 are off the scale. Just removing vitamin C as we did in the fruit meal changes nothing at all, because the general nutrition is excellent and widespread.

This is a very, very sad reality for vegans.

Vegans are experimenting with their lives to a profound degree, far beyond just tweaking a variable or two. Rather than eliminating the most egregious neolithic agents, like wheat, sugar and high-omega-6 industrial oils, they eliminate everything our ancestors ate going back more than 4 million years. The vegan diet requires the massive destruction of habitat for “fields of grain,” modern processing techniques, and delivery to markets far far away. Vegans hardly live in the pristine natural paradise they try to sell you on.

Veganism in general, and raw veganism in particular, is a recent human phenomenon that constitutes a mass nutritional experiment with its basis more in ideology, feeling, and myth than in biology, physiology, and nutrition. Vegans begin, as do many Western religions, with their own version of the doctrine of Original Sin.

They try to make you believe that you’re guilty by nature. You love the taste and smell of grilling animal flesh, and that makes you a bad person. Vegans sacrifice their desire to eat flesh in favor of “higher ideals”—as if there was any ideal higher than to live the life of a human animal on Earth as nature has suited.

Those listening to the “experts” or buying into fundamentalist vegan ideals are getting fatter and sicker. If you forget what you’ve learned from the ADA and mainstream nutritionists, self-experiment with the lifestyle you were born to live, and follow your instincts to eat real food, the pounds will start melting away and your health will improve immensely.