Post Independance
Why I’m Not Really Much of a Libertarian; The Definitive Guide

Actually haven’t felt much like blogging the last couple of days so I thought I’d just be lazy and toss up a couple of food pics.

Here’s a new thing I do called an over medium omelet. Here’s how it’s done, and it seems to work best with 3 eggs in a medium non-stick pan. Heat up your fat of choice, drop your three eggs in (don’t mix them as for a standard omelet), then start shaking the pan back & forth, side to side, around and around. One or more yolks might break, might not, but doing this spreads the white around so it’s ready to flip any time. Flip it, preferably in the professional way, without a spatula. If the yolks haven’t broken yet, they’ll break now. Then slide it off right away. When you get it right it’s like an omelet with soft and runny yolk in the middle. 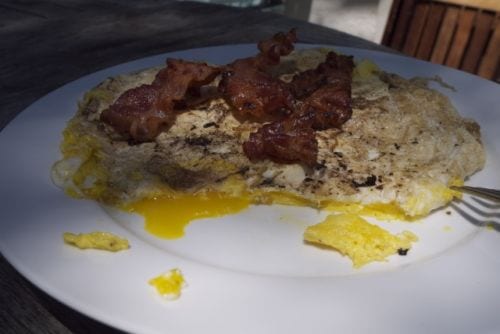 Not much to look at, I suppose, but I quite like them this way. Oh, and I found out why I wasn’t liking bacon too much. I found that, at least for now, I prefer thin sliced.

Last night’s dinner was Barbequed Beef Liver from this recipe at allrecipes.com. The only change was that I added some chopped onions. The other thing is that I messed up and tossed the liver in the pan before realizing I hadn’t dredged it in the gluten free flour and consequently, the BBQ sauce wasn’t thickened. 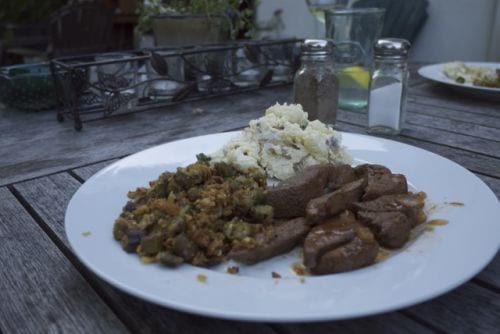 My parents had come over to drop off their dog for doggie sitting and my mom cooked up fried okra for us for to accompany the liver. I don’t know the specifics but I think it’s basically okra, corn meal and just a little flour (gluten free), all fried up in bacon drippings. The potato salad is yukon golds mixed up with some asiago cheese and green onion. 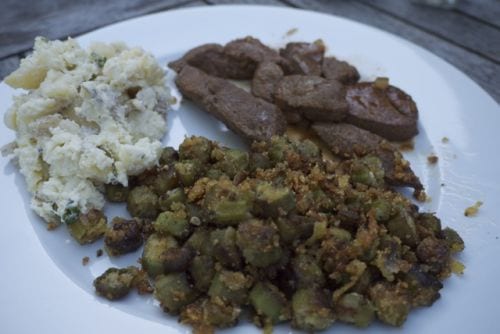 Alright, I’m off to Half Moon Bay for dinner later at the Miramar Beach Restaurant.