…Well, you can quibble and call it three words since it’s a contraction, but you’ll get the point either way.

Two years ago, Doug presented at The 21 Convention along with Mark Sisson. Word is, his presentation has more views than any other from this event in any year. Over 163,000 views at this point. Here it is.

That was more about exercise and diet. This time, he took a big risk. He spoke to 20-something men about the health care crisis and how you’re so fucked. Say what? He’s gonna talk to people who see themselves as a cross between immortal and invincible, about something they see as having no application to either?

Yep. That’s Doug. Like me, it’s always my message that counts and if the message is real, they will come.

But I still winced, a little. That was short lived.

…As an emergency room physician of 23 years, Doug has presided over the deaths of over 10,000 people. That is, Doug’s is the last face they ever saw if they saw anything, and that’s why the last slide in his presentation suggested that people develop a good measure of face-to-face kindness. …He’s told hundreds, if not thousands of mothers and fathers that their child is gone—and as recently as last week: an 11-yr old who just begged his mom to ride the ATV. Doug had to tell his mom of the final outcome of her decision. …And don’t get me wrong. I’m not for nannys, and I doubt Doug is either. It’s the vehicle and context of situation.

Doug’s was not some run-of-the mill bashing of “Obamacare” you’d see at any Tea Party Rally intended for the consumption of confirming bias, God & Country morons who are generally beyond hope (I’m always a sucker for redemption though). Rather, it was designed with respect for the intelligence of young men looking to better their lives and take The Red Pill. Because Doug, as I, largely considers the general population over a certain age generally lost to persuasion of any kind (I’m always a sucker for redemption though). They’re already completely hooked in and connected into the Matrix and whether it’s their fault for being there or not, it doesn’t matter. It’s what they bargained for—at the expense of all these young people—and they’re gonna get what they bargained for no matter what burden it places on those young people Doug was talking to.

The young people generally have no awareness of it—just like the 60-70-80-somethings, now, had no idea when they were 20 that huge chunks of their lives and what they could do and accomplish and enjoy would instead go into the collective, to support the general morass, with the huge cut coming off the top for the marauding political class. But even that was modest by comparison to what those young men are up against now. Within a few decades, the young people will not be carrying a half person on their back as they do now, but 1 1/2 people. And don’t give me the line that “I paid in.” That would be valid if you got an account statement every month. You did not. What you paid went to people now dead or dying. That money is gone. It was stolen from you in that great Ponzi Scheme and your great argument is that since you were stolen from to pay for others, others should be stolen from to pay for you.

The brilliance of Doug’s presentation was that he played history teacher. He took the time and effort to explain every single federal law concerning health care since the very first one, which I believe was in the 1920’s (Doug, please correct in comments or otherwise elaborate, if you like). His thesis was this: every single one served to separate the sacred doctor and patient fiduciary relationship—that sacred relationship that, at base, used to motivate the best and brightest to go into an enormously respected profession that was justly rewarded when accomplished competently, as well it should. But when each of these acts eventually had untenable untended consequences, nothing was ever rolled back. It was always doubled down.

He took an hour to go through about a dozen federal acts, where each in succession served to further collectivize, hostpitalize, and institutionalize medical care. Each served to further remove both doctor and patient from any awareness of the level, extent and cost of treatment—channelling more and more decision and payment to third parties, with tax breaks galore. But medical care is no more removed from economic reality than anything else. When you spend your own money on your own stuff, you care about price and quality. When you spend someone else’s money on someone else, you don’t really give much of a shit about either, unless you’re a dishonest activist or politician—who only lies when you open your mouth.

I can’t begin to go through all dozen, or however many acts—so I revert to my 2-word descriptive. There’s one that stands out a bit, however—signed into law by the most “conservative” Republican to hold presidential office in most people’s memory. That was 1986, and it’s called the Emergency Medical Treatment and Active Labor Act (EMTALA). It mandates that, for any hospital that accepts money from government:

…to provide care to anyone needing emergency healthcare treatment regardless of citizenship, legal status or ability to pay. There are no reimbursement provisions. Participating hospitals may only transfer or discharge patients needing emergency treatment under their own informed consent, after stabilization, or when their condition requires transfer to a hospital better equipped to administer the treatment.

I dunno, but there’s your national health care right there (for anyone with even the most base understanding of economics—which, I admit, is in single digit percentages). As Doug pointed out, how long do you think it took the more clever, street-smart to realize that was a health care plan at your expense? Just go to the emergency room.

Doug also pointed out why: “regardless of […] ability to pay” really means regardless of willingness to pay. Here’s where this gets very ugly, thanks to that “freedom loving” Ronald Reagan. Based on Medicare billing limit schedules, Doug provides $350,000 worth of emergency room services each year he’s not compensated for. Not only that, but he’s an independent physician in a group that provides ER services to hospitals. His overhead, or cost of doing business at all as a doctor is about $40 per hour (ref: an old comment on my blog from him…maybe more now). So get this. He does $350,000 at Medicare rates worth of services, get’s paid zero, and pays out of pocket $40 per hour—for as many hours as it takes to bill $350K to Medicare—for the privilege of saying “I’m a doctor” at cocktail parties, and getting to practice emergency medicine and save lives—and they save far more on the spot than anyone else.

In the end, he takes home about 30% of what he actually works for. Oh, and that’s before taxes.

But that’s not all. You see, there’s a criminal provision to that law. Unless Doug attends to anyone in need in the emergency room, out to 250 yards from the entrance, he can be criminally prosecuted. Criminal statutes of this sort call for treble damages. That means whatever they come up with as a fine for not providing free services for those unable or unwilling to pay, it’s tripled. But that’s not all. The “victim” of not receiving unable-or-unwilling-to-pay services also gets treble damages. So to keep ass out of jail, the doctor is up for 6 times the amount of whatever fine gets negotiated (Doug, can you provide some sense of scale for such fines or otherwise elaborate on nuts & bolts of the thing?).

Now I ask you: with just that one law and downstream consequences, isn’t it amazing that doctors still pursue the profession at all? I think Doug is hugely frustrated and I’m quite confident it’s not about the money. I think it’s about having a real doctor-patient relationship foremost. Think about it. You spend 20 years in education to be trusted to make decisions about life & death situations, and just like an astronaut or an airline pilot, you want to make them. You want to be good.

But far more than that—and I firmly believe this is true for Doug, though I didn’t ask him—emergency room medicine means that if you don’t know what “seconds count” means, you’re not fit. Imagine the ability to save a life where 99.9% of the people on Earth would have to through up arms and cry. I don’t know what makes a man willing to go into the office every day when he’s being denied 70% of what he’s worth, and has to pay taxes on the 30% he actually gets, but I have a sneaking suspicion.

They use what you love against you.

Doug can save a life when seconds count, and I imagine he loves that, as any man of his character would.

What was his conclusion? Stay out of “The Belly of the Beast.” Don’t get sick. Eat Paleoish, exercise…all that stuff. He doesn’t want your business.

…Someone asked in one of my recent posts:

McGuff’s biceps are looking huge or is it his shirt? 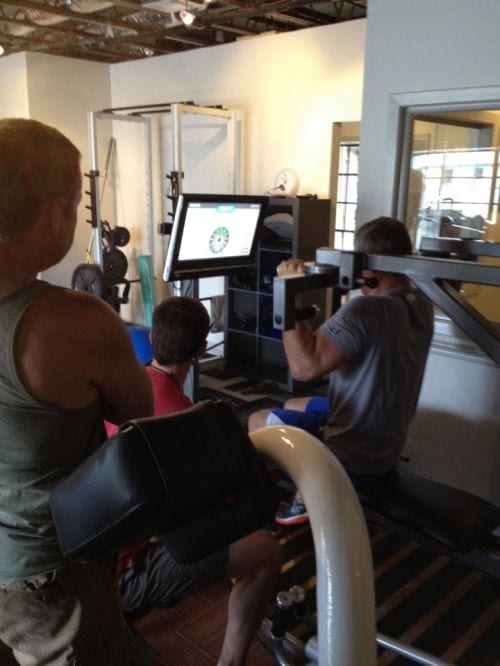 Alright, now it’s your turn. What do you think about all of that?