Free the Animal, The Book, Now in Version 2.0 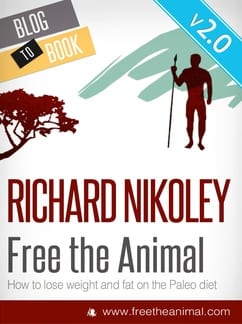 It’s finally done and finally out. It’s a bit strange that this was a seemingly longer, more worky work project for me than the first version was.

I took a lot of time to go through it word by word, with one primary goal in mind: to get rid of a kinda low-carb bias that existed the first time around. low-carb is still recognized as beneficial for some or many, but I attempt to explain why it really works (increased satiation resulting in spontaneous caloric reduction) and why so many stall (they reach caloric stasis vis-a-vis body mass and caloric intake).

So carb it down if you like, just understand what’s going on. Calories really do count.

Here’s some other things new and improved in version 2.0.

In a way, it’s only a “paleo” book by name, now. Call it paleo, Primal, Ancestral, Evolutionary but what it’s really all about is this: Quality Food, Real Food, High Nutritional Density. Then let your inner animal take care of the rest over time.

Some of my own experiments around here with eating plenty of liver, oysters, clams, mussels, eggs from fowl and fish are convincing me that the root problem is one of nutritional density. People are getting plenty of energy, actually in excess, and they exceed their energy requirements because they are essentially malnourished, which ironically goes all the bay back to a Taubsian idea in his descriptions of obese Pima Indians subsisting on nutritionally bankrupt but energy sufficient—to excess—white flour, sugar, and cooking oil.

I appreciate the many thousands who purchased it the first time around, making it Hyperink’s top seller amongst the 1,300 books they’ve published; and thanks also for giving away over 1,000 copies to friends and family (the buy 1, give 5 away deal). I really don’t expect anyone to have to go buy it again (those who purchased it at Hyperink have already received their free update—free lifetime updates being part of the deal). On the other hand, there is a singular purpose to this project, and that’s to be the best go-to source to introduce the people you love the most to an easy and sustainable lifestyle that will improve their body composition and health.

It’s not about gettiing ripped or maintaining “insanely” low body fat percentages. It’s about feeling good, comfortable in your own skin, then letting your body do the hard work naturally by nourishing it properly.

The Amazon reviews stand at 21 5-star, a number I’m happy with not overtly pimping for them at all, much. No sock puppeting on my part, either. You can find all the sources to get the book here.