My Butt Hurts So Bad

Skyler Tanner is, to me, just like one of my brothers in many respects. That is, when together, there is pretty much never a moment of silence and each has a backlog of shit to talk about—more than half forgotten by the time either can get a word in.

…Oh, and while in Austin, my real brother, Stacy, came up from Houston and stayed a night. He saw my presentation and a few others, and was graciously invited by Anthony Johnson  to attend dinner with the presenters. He knows Austin pretty well, so took me to a place or two, Peché among them…which was great. Scotch and pork belly. Neither of us were ever at a moment of loss for words. That’s what I mean.

You know Skyler, don’t you? Now, unless you read that post I just linked, you won’t understand why it’s funny that as I was walking by in the hotel for The 21 Convention and didn’t see him, what I heard was, “Hey, Fuck You!.”

As I already blogged, Skyler gave an impressive, sciency, exercise/health physiology presentation, while Keith Norris gave an impressive exercise/power/efficiency practicality presentation—back-to-back. While Skyler is my “brother,” Keith is the epitome of paleo in terms of soul, kindness, and example. He’s the poster boy. He’s the nicest guy in the paleosphere and any shame or embarassment I ever feel for myself over whatever anyone may say about me…it pales in comparison to the shame I feel at a peripheral glance at Keith Norris. In essence, he’s my PaleoTouchstone. When I grow up, I want to be like Keith Norris with an edge. It’s a lifelong pursuit I will never attain, but will keep trying anyway. 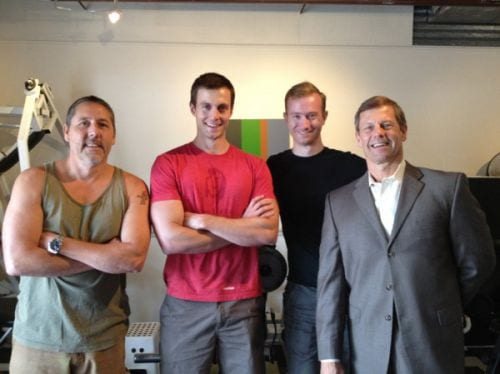 Back to the subject

That photo was taken yesterday morning after Skyler kicked the asses of, in order:

This all happened within the space of about an hour, 10 minutes or so per workout. It’s an epiphany for me. In general:

In that second bullet, I said “depending.” While I’ve worked with a trainer, Skyler is not a regular cheerleading, encouraging trainer. He’s a cold, detached, …”and 3, 2, 1″…torture chamber master. Here, just look, the essential message, featuring Skyler, Keith, and even an appearance by Rob Wolf.

The thing is, it doesn’t even take two 30-minute sessions per week, and I’m sure Skyler and Keith would tell you that (though, perhaps at the beginning, to get people up to a reasonable performance level). I believe Skyler told me he’s at about 15 minutes once every 5 days.

Back to Skyler the torturer. It’s weird, and while I was chomping at the bit and initially dismayed to have to be last to come under his gauntlet; in retrospect, I’m glad I did. Skyler is a smart mutherfucker, though you’d never know it by looking at him. See, he’s of the same general exercise philosophy as exercise author and 23-year emergency room physician Dr. Doug McGuff: Body by Science: A Research Based Program to Get the Results You Want in 12 Minutes a Week. And Eric and his wife exercise at Doug’s own center. I had no idea I was the odd man out, into some weird incestuous affair, until I began taking cognizance of the inside banter.

So basically, Skyler—without telling me—wanted me to observe how it’s done. It’s a good thing, because the style of exercise was totally foreign to me. How can you possibly get an ass-kicking workout that gives you all the benefits you want for health and body composition—without atoning for your sins in the gym for hours per week…because you’re a lazy ass, and that’s your penance?

You do it efficiently. How do you do it efficiently? You have someone show you. Who shows you? Skyler the torture master does. But, see, he’s even smarter than the entire Catholic Church Monolith. While they put people on racks and burnt them at the  stake for one-off affairs, Skyler isn’t forcing anyone, and thus, needs people to come back for more. His genius is in getting you to accept the benefit of your torture. “….3,2,1…you’re done.”

“That’s all?” any given torture victim asks? “I was expecting a 5,4,3,2,1-torture countdown.” See, he  cleverly throws you bones, almost randomly. Mutherfucker. But you know what? If you’re literally torn asunder on the rack, or burnt to a crisp on the stake, there’s no repeat business, which of course is proof positive that free market capitalism harms people less. Skyler doesn’t have the power of taxation (or the purchase of indulgences towards early release from purgatory), and as such, has had to devise clever ways and means of torturing people to effect…just enough. And it goes to his mastery that he can get them to come back for more.

…If only. Imagine where we’d be had we skipped the 1,000 year Dark Ages and gone straight to enlightenment, featuring “Torture Lite.”

Alright, let me indulge myself in the serious for a moment. Skyler isn’t just a coach or cheerleader, he’s a mouth-on manager—because you have to do it yourself so his hands would work against the goal. Basically, he directs you through every single rep of every single set of every single exercise, until you’re done.

The result? Efficiency. Time saved for you, and probably more exercise benefit. Time saved for them…they can help more people in their limited existential time and physical space.

I was going to go over details about how Skyler does this, but in spite of a wonderful dinner afterwards, hosted at his home with his wife Sarah, he still owes me for the sore butt, even after a gracious lift to the airport. So ask him questions in comments and I’ll be sure he sees them. 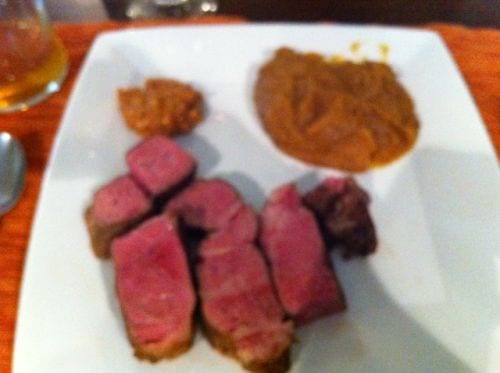 Blurry Sous-Vide Roast and the Most Amazing Butternut Squash Puree Ever. 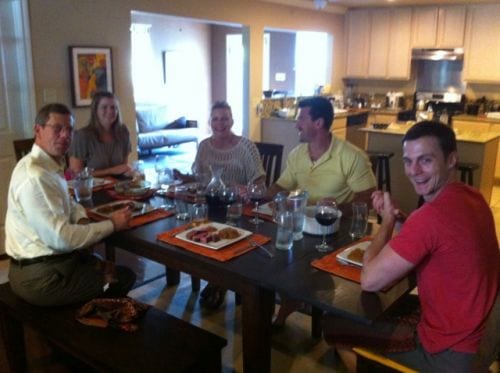 OK, ask Skyler questions about efficient exercise in comments, but certainly not before making fun of his Ronald McDonald smile in the photo. You’re probably more likely to get a good and thorough answer from him if you do.