Here’s the post that kicked it all off. This is chapter 10 of 12, to give interested readers the chance to take on the free ebook chapter by chapter over the weekend, debate it amongst themselves, or even challenge the author who’s keeping tabs.

From: Man Alive! A survival manual for the human mind.

Chapter 10. A mindful catalog of mindlessness.

I told you how you came to be a self, but how did you go about failing so completely, so consistently, to be a defective, bungled and botched not-self? You worked at it, that’s how.

It really is a testament to your fundamental goodness that you have tried so hard, for all of your life, to conform to ideas of moral virtue that no one can live down to fully and yet still manage to remain alive as a human being. You were thoughtless – mindless – and so you did not know that the cause of your repeated failures at attaining those “virtues” was human nature itself. But you were damned if you didn’t try to be what you sincerely thought was “good,” and that much is all to your credit. You may have behaved mindlessly, but you gave your mindless pursuit of ethical perversion everything you had.

But how did anyone gull you into behaving so thoughtlessly so scrupulously and so relentlessly for so long?

Here’s one good way: Inclusion and exclusion. It worked great when you were five years old and it still works great today. Obviously, no one can indoctrinate you before you master Fathertongue. Before then, words are semaphores to you, ciphers, with no more conceptual content than the wagging of a dog’s tail. If someone had read the Bible to you while you were still a toddler, or the Koran or the The Federalist Papers or The Communist Manifesto, what you would have heard, absorbed and acted upon would have been nothing but incomprehensible sounds, less meaningful to you, and less interesting, than the dog’s barking. But as soon as you came to be able to think in Fathertongue, the human beings around you could undertake to reward you, physically or emotionally, for conforming to their dogmas, and to punish you for failing to.

END_OF_DOCUMENT_TOKEN_TO_BE_REPLACED

Headed up to the rim around 5pm, intending for a 6:30ish launch in the glass off (smooth rising air everywhere). Lo & behold, there sits Dave with his tandem wing, whom I’d not seen in a few years. That’s one cool thing about hang gliding: you’ll randomly run into people on mountain tops you haven’t seen in a long time.

Before long there were perhaps 15 pilots setting up their gliders and lots of spectators, including my family. Well, it was decided that my niece, Anna, would take a tandem flight—and her first flight in a hang glider—with Dave. Not only have I seen Dave safely complete lots of tandem instructional fights but he’s done somewhere around 10,000 of them without a single mishap. For instructional and introductory purposes, Dave wanted for the air to smooth out and lighten up a bit, so a later launch was called for. They launched and then I, right behind, just after 7pm. They flew about 30 minutes and I put in 40.

So here’s a bunch of photos of the festivities. You can click on them for the high resolution versions. 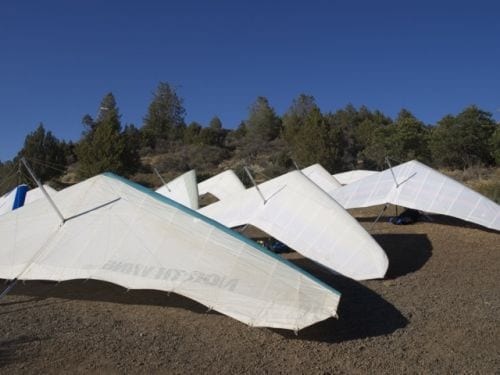 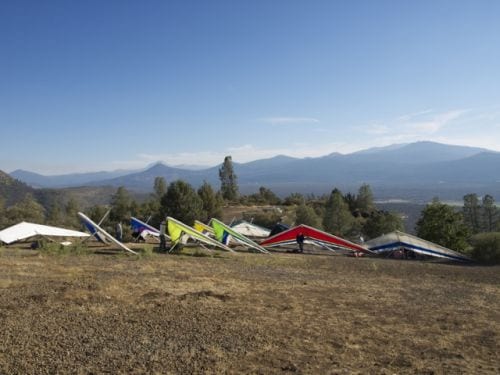 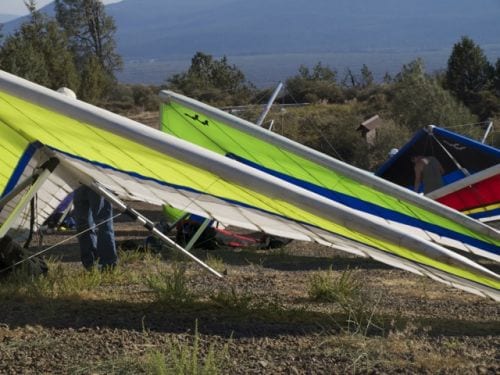 Rigging my Will’s Wing Sport 2 in the background 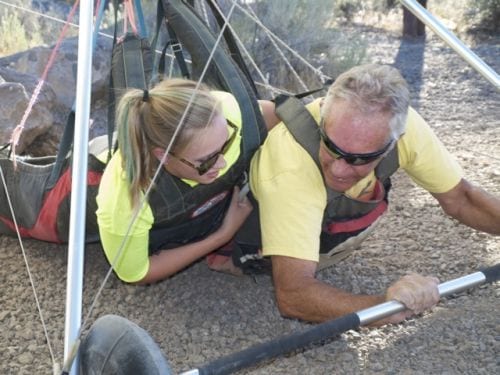 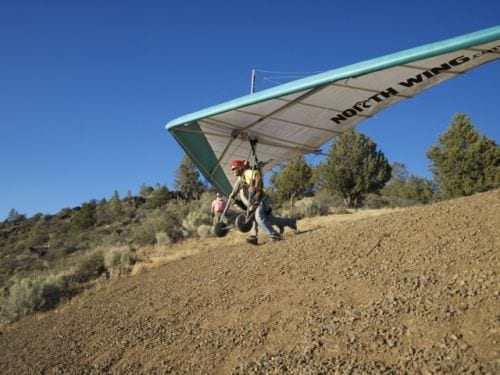 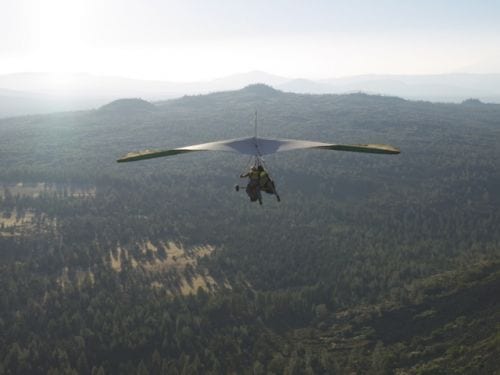 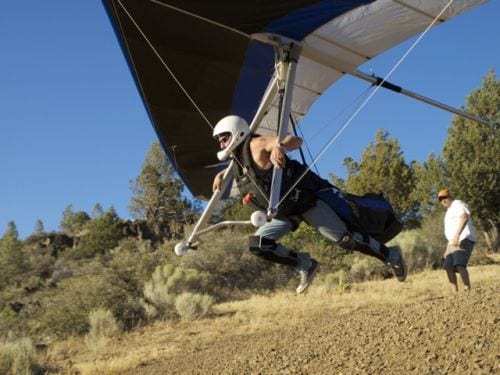 My launch right behind 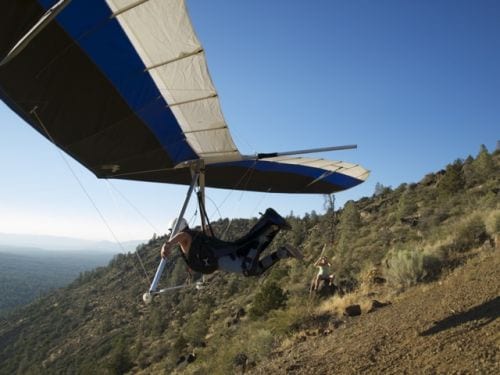 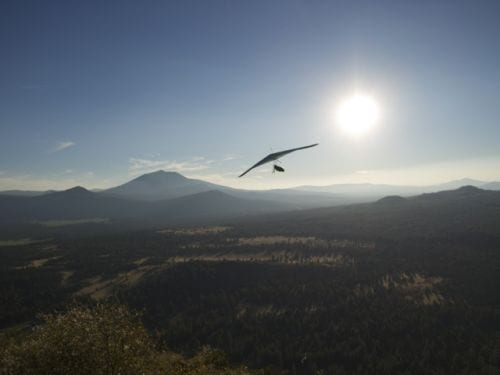 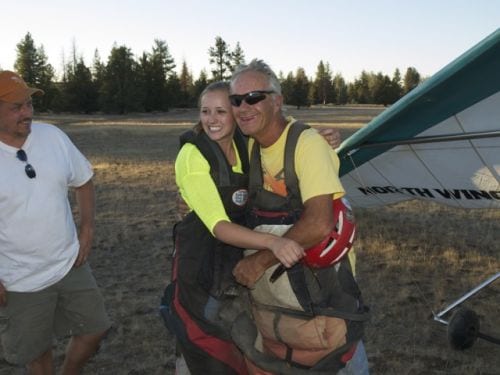 The smile says it all, doesn’t it?

Tonight I’ll strap my GoPro to the keel and shoot some onboard video for tomorrow’s update on all the fun.

Headed out Wednesday shortly before noon for the 5-6 hour dive. 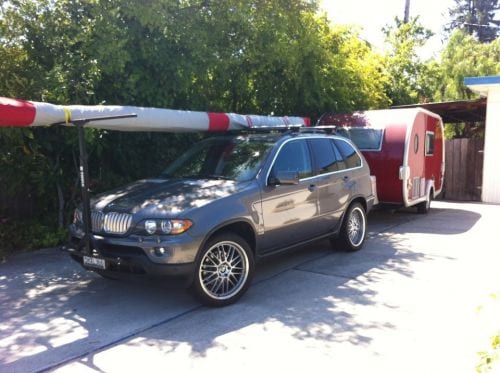 Wednesday evening was a simpler affair for dinner than is often the case for the 15 years my family and I have been camping here each August. You can click on images for the higher resolution versions. 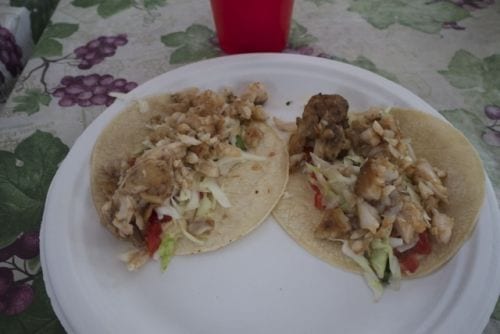 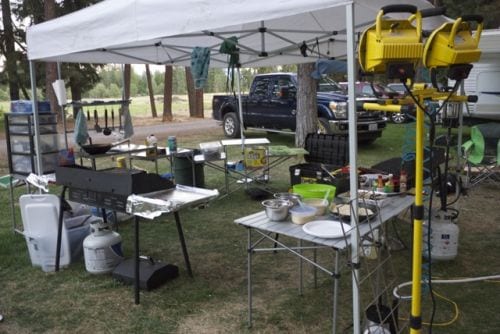 Thursday morning was a skip breakfast day, hitting the road about an hour north to the McCloud river falls, where we got in some jumps from the rocks and a bit of soaking in about 55 deg water (bet it was far colder in May). 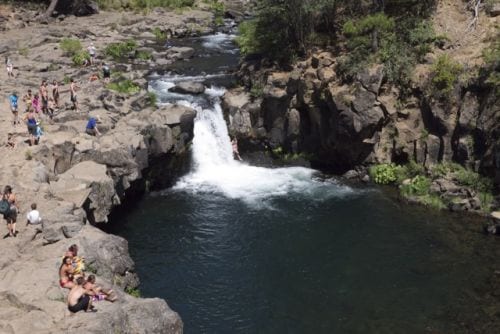 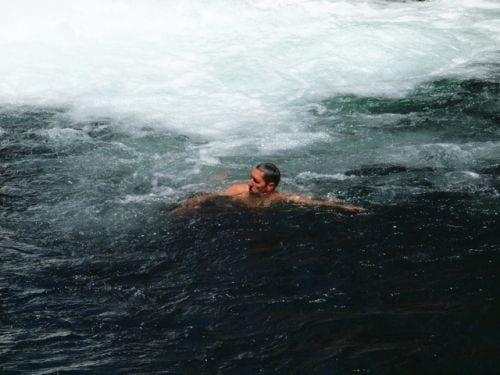 There are some folks who jump the much higher cliffs of the middle and upper falls. 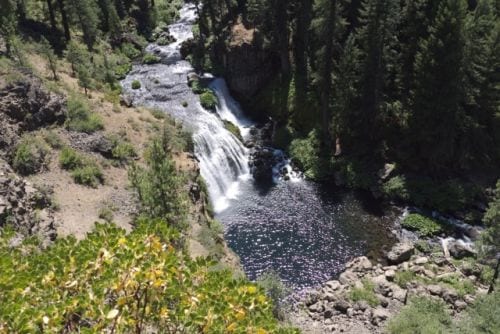 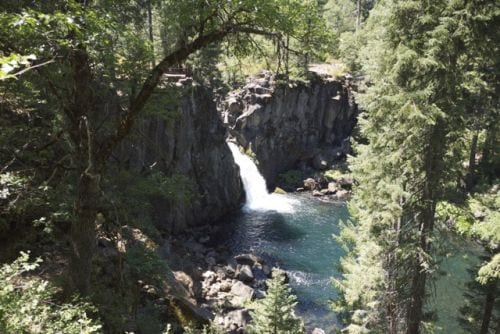 Not quite in the shadow of Mt. Shasta, but pretty close. 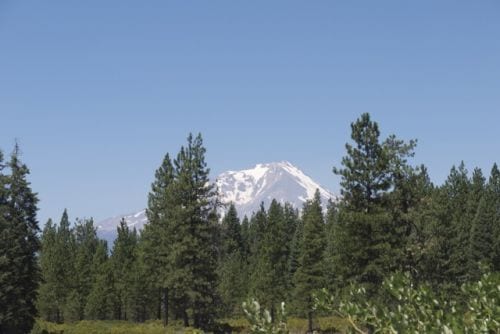 Dinner was courtesy of my other brother on site—Swiss Steak—but my photo turned out crappy, so no pic. Breakfast, however, turned out fine. 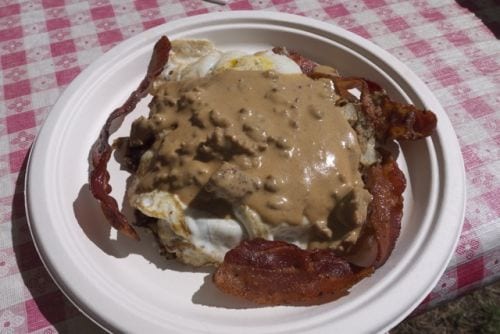 So this afternoon will be about some flying. Took a trip up to the launch area last evening for some contemplation. 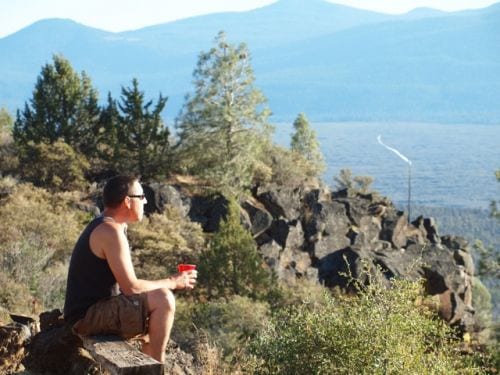 So perhaps a post about flying hang gliders tomorrow. After this evening’s fun. As for food, I have about 6-8 pounds of beef roast in the crockpot.