I once smoked a brisket years ago but otherwise had never cooked one. From what I gather, it’s a rather tricky meat to cook as it doesn’t have a lot in intramuscular fat, and it’s a muscle meat that gets a lot of work, being as it is, the pectoral muscle of the cow.

We were having friends over for dinner Saturday. My original thought was sous vide pork belly, but then I see all the various recipes call for a soak of 18-36 hours. Too late. But I wanted to do something for a first. Brisket it was.

I headed over to a local market—Lunardi’s—with the most extensive butcher counter around (it must be 50 yards long). They had one brisket under the glass, about 4 pounds, very nice and clean trimmed. I asked if he had one with more fat; he heads to the back and got one that had not been trimmed yet. 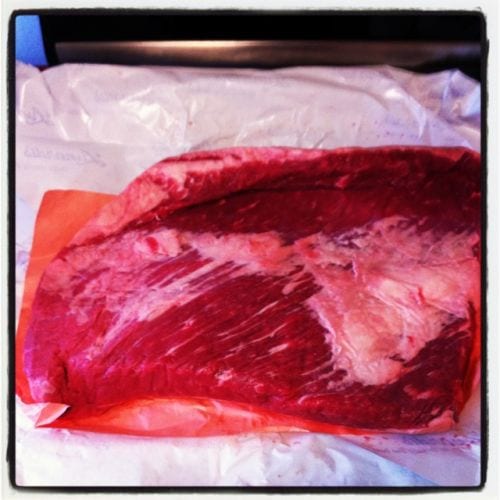 On the backside, there was the nice layer of fat. You’ll see that later when it’s sliced up.

In terms of cooking method, I did a light dry rub using The Salt Lick, let it sit for an hour, wrapped it in foil, into a baking pan, and in the oven at 200 for six full hours. For the first 45 minutes and then the last 30 minutes, I kicked the temperature up to 350. Then I let it rest, still covered in foil, for a full hour.

The final step was to sear both sides on the gas grill, a few minutes per side, on high. 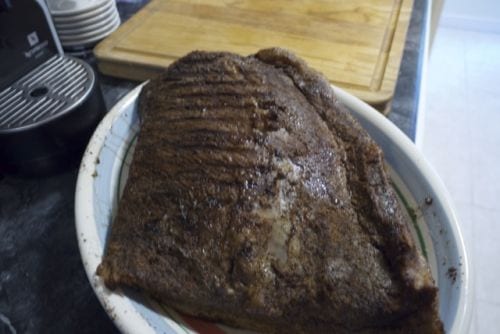 During the afternoon, I also prepared fresh green beans with bacon & onion. It’s about 5 handfulls of the beans, a whole onion, 4 strips of bacon sliced, fried, and the bacon fat is added to the pot along with 2 cups of chicken stock and enough water to cover. Bring to a boil, then turn to a medium low simmer, uncovered. Takes about 4 hours. Just let the liquid simmer off until it’s very soupy with a deep flavor.

Next was the BBQ sauce. There was a recipe I adapted by a guy who had a blog called Son of Grok, but it’s no longer there. Luckily, someone had put it up in Mark Sisson’s forum so I found it right away. Here’s my version.

It’s a very nice sauce with just the right balance of hot/spice, tang, and sweet. Per serving, the sugar load is minuscule compared to anything I can find at a BBQ specialty store. Even high end products typically have HFCS as one of the top ingredients, if not the very top.

Back to the brisket, it was time to slice. Click to open the high resolution. 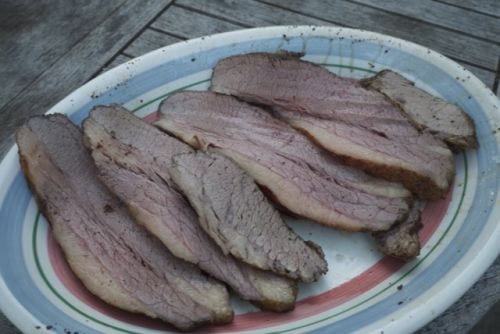 Our friend Julie prepared a salad with watermelon, onion, feta cheese crumbles and fresh mint leaves to go alongside. I also got some cole slaw from the Lunadi’s deli counter. 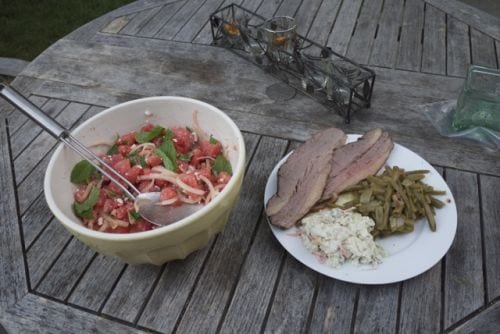 Here’s a closeup on the mail plate. 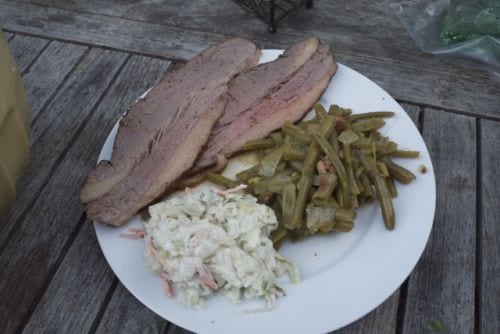 It tuned out to be an interesting experience because this was not your typical BBQ brisket that you pull apart, dip in sauce and eat. Far more like roast beef, but very moist, very tasty and with just enough “chew” so you know you’re really eating meat. The BBQ sauce was a nice compliment to it.

The leftovers including all the fat scraps went into the crockpot Sunday morning and now I have enough shredded brisket for many meals this week, including probably a Fat Bread sandwich and at least a corn tortilla taco or two.