My next post—up tomorrow—will be shocking, at least for some. What if a woman reader, amongst many similar, doesn’t much care for the Paleo “feminists”? What if, instead, she has the audacity, the self-confidence and the courage to take on alpha males, accepting no substitute? She sent me a B&W artsy nude of herself taken by a pro, along with permission to post it, name attached. Beta males who only suck up to feminists get only to see what I post about it. They never get sent a photo like that. Laf.

Don’t worry, betas. You’ll have plenty of OMG ammo for further sucking up, once you see that post. …After all, it’s quite a task to keep size 16 panties in a bunch…and débutantes feeling cathartic. You need material. I’m happy to provide it. You’re welcome. (Don’t misunderstand. My comment threads are replete with alphaT. Not what I’m talking about.)

…I drafted a whole post last night, chopped it through the woman who’s gracing us, slept on it and the moment I woke up, knew I was not going to post it. I had far wider integrations to make on the subject of feminism, misogyny, débutantes…and size 16 bunched panties. Stay tuned.

In the meantime, I had food inspiration this afternoon I thought I’d share. I had a half eaten rotisserie chicken carcass. I had potatoes. I had onions. My first thought was a chicken soup with the heartiness of potatoes. Next idea: a mash with some sort of hearty chicken dish on the side. Then I thought of shepherd’s pie, a mainstay of pub food. Bingo.

So here’s a one-off chicken variation. First, you have to make your stew. I broke up the carcass, added as little water and chicken stock as possible to cover (you have to reduce, later, so don’t fuck yourself up), boiled it, strained, keeping the pot on boil and reducing as the chicken cools so you can get all the meat off.

In the meantime, half an onion chopped, sautéd to full, important caramelization in butter. Then, a couple of large potatoes in the nuker, 5 minutes on one side, 2-3 on the other. Skin falls off, mash them into the butter and caramelized onion with a couple of splashes of heavy cream or H&H. Set it aside, best is in the oven on 170F warm, covered.

Go back to work on your stew. Should be well reduced by now. You can tell by tasting. If it has a watery taste (not consistency), not reduced enough. Add a couple of level teaspoons of dried tarragon (less is more; be careful). Go to work on separating your chicken meat and tossing it in the pot. Prepare a cold water or cold stock slurry with your powdered starch of choice. I use potato starch. Introduce it to the boiling pot once you don’t have a watery taste. Salt & pepper to taste.

Spread your potato & onion mash all over your bowl & up the sides. Sorry, was in a rush; all pics from the phone cam. You can see the level of the caramelization of the onions. 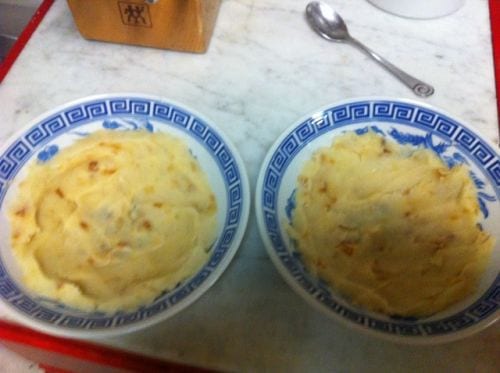 Then introduce your hearty chicken stew, and since lemon always goes well with chicken & tarragon, splurge a little. Beta male tip: you’ll definitely want to get those seeds out of the lemon. You don’t want to incur wrath.

Now comes the shepherd’s pie knock off part. Take the other half of your mash and make pancakes (alphas: with your hands; betas: figure it out). You’ll need to use one of those thin & flat short-order cook spatulas to quickly—without hesitation or trepidation—whip it right off that surface. Or, you can use the beta male-method of lining the cutting board with plastic wrap, oh so gently lifting it off, then pealing it off. Overt gentleness is the key, there. Make sure someone notices. Bonus points if she’s a staunch feminist.

The rest is obvious. That goes on the top, another slice of lemon, and it’s fired under the broiler for a few. 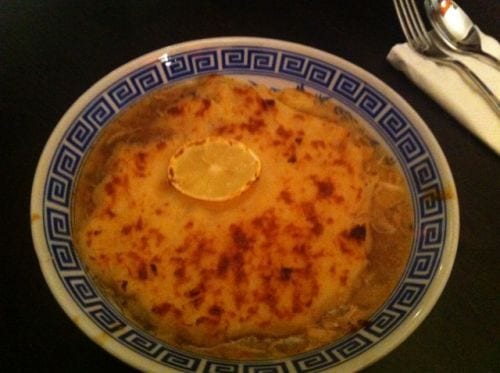 And that’s how you get an idea in the late afternoon, work out the details, swear off all cookbooks for life, do your own shit and fix a meal for your misyginist loving wife that’s never ever been made before.

Cookbooks are mostly for betas.