I guess that owing to not living in a dense urban environment, the “Food Truck Revolution” escaped my notice while I wasn’t watching. Yea, I’d heard bits & pieces here and there—I seem to recall a local public radio show covering some of the antagonisms in Oakland and San Francisco between food truck licensing/permitting and brick & mortar restaurants. The fixed locations want more barriers and the food trucks want none. Go figure.

The cool thing about food trucks is that they can easily track sales by location, and rather than having to spend money marketing and counting on people to come to them, they just gradually evolve to going where the business is best; that is, if they are relatively free to do so.

I remember back in the day, working on construction sites as a kid and frequenting the catering trucks, which were basically just outlets for packaged stuff like sandwiches and burritos. Even in Japan, there was a catering truck concession that would make its rounds from pier to pier on the Yokosuka US Navy base. We affectionately referred to it as “The Roach Coach.”

By the looks of things, they’ve come a long way, now sporting flashy designs, quality food, friendly service and the whole deal. Earlier this summer Beatrice & I went down to a site in Saratoga, CA, the old La Hacienda and I snapped some photos. You can clip to open the larger versions, especially the menus. 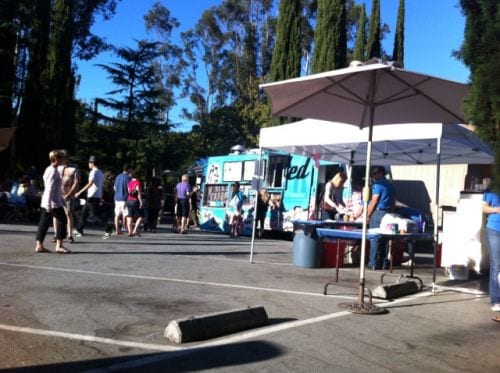 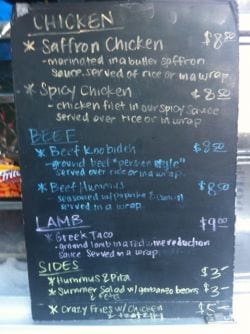 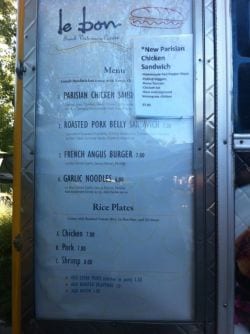 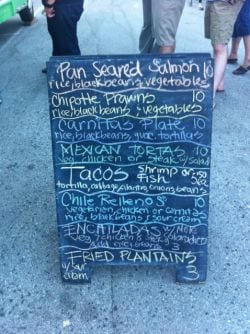 Well it’s a very welcome thing for me. Anything that can motivate people to make better, quality food choices. Looks to me that there’s plenty of fare for foodies in general and even “Paleos” alike.

I settled on the massaman curry over rice, extra spicy. Since it’s already in a stew, exra spice was provided by red chili flakes. Yikes! I did end up removing about half of them. 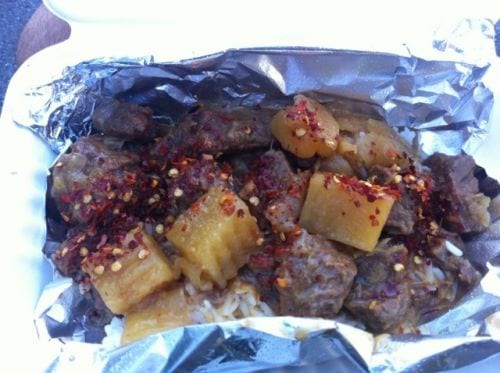 Bea & I then split a tuna sashimi taco dish. 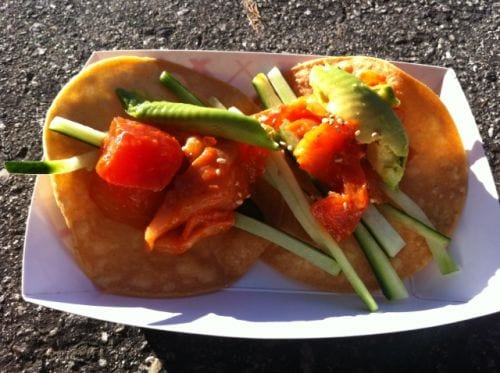 Over the years we’ve all heard talk about how it would be great to have paleo restaurants and I believe there might be a few here and there. But given the relative simplicity of paleo (meat, fish, fowl, vegetables, fruits, herbs, spices, nuts) it seems to me that a food truck or even a food cart is the way to go. Far less investment and risk is diminished because if one location isn’t working out you can find another.

Looks like Charles Aguiling is doing just such a thing in Seattle.

Most impressively, his Kickstarter project to raise $20,000 was successful to the tun of over $22,000 raised. I wish him all success. Hopefully, he or his partners can pop into comments and let us know how things are going, projected launch, and so on.

…Ah, and here’s two more. Would love to hear in comments about how things are going for these folks.

Very cool. Let the trend continue. I’m already impressed with the general quality of what I’m seeing and it seems there’s always a choice or two that’s pretty damn paleo, but this is an opportunity to be an ambassador for kicking things up just another notch or two.

Any others? Promote away and needless to say, any of you in these areas, stop in and get some food.