Saturday, we headed off to the “chalet” or “cabin,” whichever description suits you best. 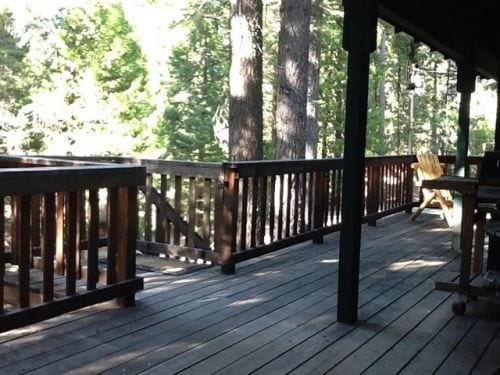 View From My Meditation Chair

We got it back in the early 2000s and it burnt 6 weeks later, after a year and a half legal battle with the previous owner. Last summer, after noting we were spending an awful lot of money on it for a half dozen visits per year, we turned it into a vacation rental that has been marvelously successful. In that that town of Arnold, CA, with about 60 vacation rentals, ours is by far the most successful, booked almost all the time. (Listings: VRBO and HomeAway—with 29, all, 100% 5-Star reviews and counting)

It was to be a one night stay. I had shit to take care of regarding a few critiques from guest…normal wear & tear stuff. Come Sunday evening, we couldn’t bring ourselves to leave, so decided on the 4am Monday morning wakeup instead. All went according to plan until an hour or so away from home: a freeway fatality had shut down an Interstate for 3 hours, and the Dominos fell all around and in all directions. A 2.5 hour drive turned into over 5 hours. That wasn’t fun, but it also doesn’t diminish the experience. We stayed there for a week in early June and hadn’t been up there since. No regrets, especially after having gone to bed at 8:30pm last night, and not arising until 6:30 this morning.

I had emails and comments to catch up on. Marie, PhD (who also contributed to my book), slid this in front of our noses and I can’t believe I’d not seen it before.

Get past George Carlin‘s general, but valid—unless you’re a fucking moron—funny critique of religion and belief in general—or don’t—in case it makes you feel smart, rather than ignorant. Rather, focus instead on how it’s at least as good, and perhaps arguably better, to pray to Joe Pesci instead of your imaginary friend. Laf.

…This hit my email this morning. Having blogged about the insane Islamic menace already, it’s apropos. Remy. Imagine (there’s no You Tube).

Along those lines, Greg Swann does have a suggestion for marginalizing all those pathetic dirty, nightshirt wearing, impotent fucks—who can’t get it up until their women have been dominated and beaten into submission.

Sounds like a good idea to me, and the Bible too. How about many pictures per day on YouTube with your dog taking a righteous shit on both an open Bible, and the Koran? I just might have to try that. Will that send home the message, people, that I think it’s all really dogshit and I have a life to lead and if you’re going to be “offended,” better I just go for broke?

Get this: part of my life is the absolute joy I get in offending adult believers over fairy tales. To see them hurt? No, not at all. Its because I’d love them to see them become more rational, because that will afford them a better animal life, because animals always do worse with fantasy superseding reality. The hurt and 3rd party scorn I get—a lot—is not only worth it, but has barely ever phased me in 20 years of doing this. On the contrary, it only encourages me. I love my role in life.

Have we not have had enough of barely encephalized people killing and harming others over their inability to achieve a proper life— that of a human animal—without being pathetically self-subjugated to a bunch of stupid silly shit? I’m so tired or it all. Fuck all moron religion, everywhere. Move on. You’re gonna die; you will not see your loved ones in heaven. They’re fucking dead as dusty doornails. Get over it.

You have nothing, nothing and not a thing in life, unless you make it. Life counts. It always has.

…Cow, in comments, tries his or her best to give input without any baggage. Takes while while to grok. Once you do, all is cow “enlightenment;” though, since it’s only a cow, perhaps “insight without Neolithic prejudice” would be a better word. That said. He or she still likes to lick his or her genitals every day, so I like to help when I can.