“…I wear tuna fish sandwich and I don’t smell like any other guy.”

Many people come to me and they say, “Hey, how can you be such a swinging sex god?” Well I tell you. It’s not because I can make love up to one time a night. It’s not because I say the things a woman wants to hear like, “Are you through yet?” It’s because I know how to read a woman. If she is like a cat, I bring kitty litter. If she is like a dog, we do it on the paper. But I’m also a unique guy too. The kind of guy who likes to have his own special scent. Not to smell like every other guy. I like to have my own, individual odor. That’s why I wear tuna fish sandwich. I put a tuna fish sandwich under each arm. Maybe one or two behind the ears. I don’t smell like any other guy. And it’s economical too because the smell lasts four or five days. —Steve Martin

I heard that bit sometime in the early 80s. You have to hear him do it in the “macho Latin lover” voice he does (couldn’t find a video). The thing that was so great about Steve Martin doing standup was that he could do the most ridiculous off the wall stuff and get away with it.

…Now that we have Fat Bread to work with—and a nice PUFA profile, as it uses macadamia and coconut butters—tuna salad is a way more attractive thing to make from time to time. 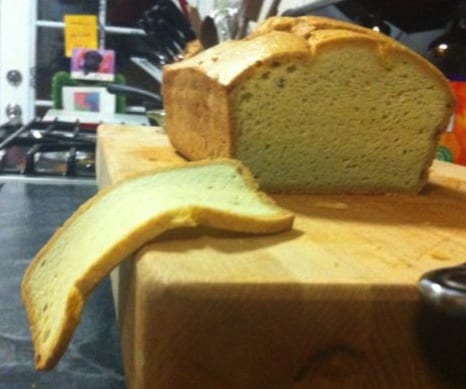 So let’s delve into the myriad ways to do tuna salad, as well as touch on the prickly issue of mayonnaise (virtually all commercial mayo is made with industrial vegetable/seed oils).

First, though, technically speaking, Fat Bread is not “paleo,” nor is mayonnaise. But who cares? The point is, we’re using some of the best ingredients we can in order to get to a place where it’s pretty much like the tuna fish sandwich you know and love, in a Paleo-ish context.

I’ve loved tuna salad ever since I can remember as a kid. In college and when I lived on my own for many years, it was a staple for me (better than PBJ any day). I don’t actually have a recipe, per se, but rather, a number of ingredients I choose from, and I make it myriad ways. Here’s pretty much everything I may source from to make a batch. When I make it, it’s typically a 2-can batch (normal size).

First let’s talk tuna. For store bought cans, I usually get the Trader Joe‘s white albacore packed in water. I believe Whole Foods or similar high end markets have good quality stuff. Otherwise, whatever it is, be it a major brand, it’s whole white albacore, packed in water. You could also purchase tuna filets, poach or steam them, and make your own for salad.

The very best canned tuna I’ve ever had is High Seas Tuna. Simply amazing, but very pricey. These are all line caught tuna in shallow waters, so smaller fish, less mercury accumulation. Standard packing for canned tuna is to cook it once, pack it in water or oil, and cook again to seal the can. High seas packs raw (or smoked) with no added water or oil, and cooks it once in the can. You don’t drain the juice in this tuna, it’s that damn good. Actually, I don’t even make tuna salad with this stuff. Just a bit of sea salt, lemon, drizzle of olive oil and that’s it. Or I top a leafy green salad with it, dressed in olive oil and lemon.

Here’s the list of ingredients I choose from when making a batch (I never use all of them; this all goes to different varieties).

Here’s the “classic” preparation, the one I use most.

Drain your 2 cans of tuna and squeeze the water out. Place it in your mixing bowl and using a whisk, pound and smash it down in order to break it up into a fine, dry mixture, as in the dried beef for pemmican. This increases the surface area for the flavors to blend.

Add all the ingredients: onion (medium chopped), dill pickle (medium chopped), a dash of the pickle juice, sprinkle of the dill weed, a couple of shakes of garlic powder, bacon bits (a drizzle of drippings if fresh cooked and you have on hand),  dollop of yellow mustard. In terms of quantities, it may be a half onion, 2 dill halves, 2-3 slices of bacon. But experiment.

Begin mixing and add your mayonnaise until you have a nice moist tuna salad. 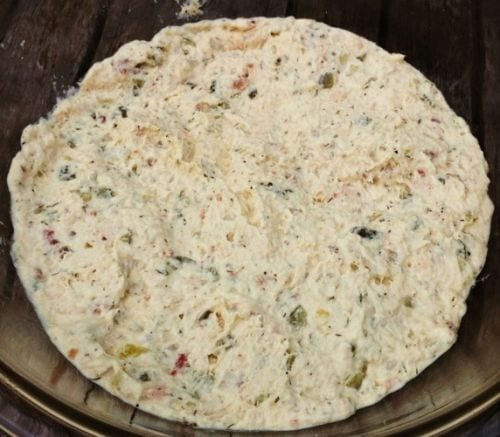 I like to use a rubber spatula to mix in the mayo so I can keep scraping the bowl and mix in all the dry ingredients. Then I like to pat it down firmly and let it cure in the fridge for 4-8 hours. It takes a while for the ingredients to blend. Be sure and mix it up well before eating.

In terms of variation, sometimes the celery, in place of or in addition to the pickle. Celery is great for the crunch, primarily. If I don’t have dill pickles, then sweet or dill relish. Careful with the sweet. You don’t want it to end up tasting like when some complete moron makes tuna salad from “Miracle Whip,” the most disgusting stuff on earth.

My favorite variation is the classic above, but with the addition of about a teaspoon—or to taste—of the curry powder. This can be quite awesome in flavor. You might want to forego the bacon. Bacon is really the prime ingredient because it just gives it an irresistible flavor that really comes through. Doesn’t taste like bacon, just barely; wonderful.

For a very quick & dirty: tuna, onion, pickle, garlic powder, yellow mustard. I usually do that when I want it “right now,” and I don’t wait for it to cure.

The mayo is the big problem because you use quite a lot of it and everything you can get in a jar at the store is pretty much crap. But some crap is worse than others. Before this Fat Bread came along, I’d been reduced to making maybe a couple of batches of tuna per year and so what the hell, I just got the 100% canola oil mayo from Trader Joe‘s. Canola has less N-6 PUFA than other oils. I’d go through maybe one jar per year and they would usually go past expiration before done. At that level, why bother? YMMV.

A great option is high-oleic sunflower oil. I can’t recall the fat profile offhand, but I believe it’s similar to olive oil at about 70% monounsaturated. It has a light taste, unlike olive. You can make mayo with olive oil, too, but a lot of people don’t like. I’ve made a couple of batches with the oil from this selective bread variant of sunflower and it was delicious.

A third option is to make it with MCT Oil, which is 100% medium chain triglycerides, i.e., saturated fat. No PUFA. I haven’t done this, but here’s a recipe, courtesy of reader and commenter Dan Linehan.

[There’s lots of video on YouTube as to the process of making mayonnaise where you have to drizzle.]

…Have you seen yet how to make mayonnaise with an immersion or “stick” blender? I got one a while back and it’s so useful for so many things (making protein smoothies, too). But mayonnaise is a cinch, because all ingredients go in from the start. Just be sure to be real patient at the beginning.

There’s one more option I haven’t tried, but want to. Ever heard of Rillettes? I just adore the duck and in fact, had some just a while back, imported from France. Rellettes, when at room temperature and the fat is soft, hase pretty much the same consistency as tuna salad. So, I’m thinking, get some rendered duck fat or leaf lard (white, no pork flavor) and simply let it get to room temp, and use it entirely in place of the tuna. I’m gonna try it.

Ok, your turn. Anyone have a favorite tuna recipe?

…Oh, yea, wait. I forgot the whole purpose. Fat Bread toasts up pretty nicely as well. I particularly like tuna on toast. 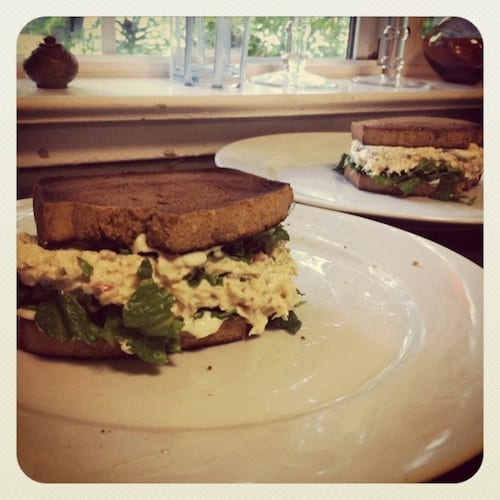 That was one of the bread batches where I experimented with almond butter in place of the macadamia butter. That’s why it’s brown.