The other day when I was composing my post on tuna salad I suddenly thought of rillettes (pronounced ‘ree-yet’), a sort of French rustic pâté. Many homes I was lucky enough to dine at back in my years there always had a crock of rillettes—pork or duck typically. It keeps for a long time without refrigeration and is alwways served room temperature.

Here’s the description from Wikipedia.

Rillettes is a preparation of meat similar to pâté. Originally made with pork, the meat is cubed or chopped, salted heavily and cooked slowly in fat until it is tender enough to be easily shredded, and then cooled with enough of the fat to form a paste. They are normally used as spread on bread or toast and served at room temperature.

Rillettes are also made with other meats, goose, duck, chicken, game birds, rabbit and sometimes with fish such as anchovies, tuna or salmon.

And my are they good. Very fatty. It’s like a French form of pemmican. I thought of them because mayonnaise for tuna salad is a pain in the ass—bad for you if purchased from the store because of the frankenoils they use to make it…a chore to make at home.

But what if you could make “loaded” tuna rillettes as a surrogate for tuna salad, but use an animal fat such as butter, duck fat, leaf lard, bacon fat, etc., instead? So I set off to experiment. What would be the consistency if I took duck rillettes and loaded them up with the ingredients one might put in tuna salad? That’s exactly what I did. 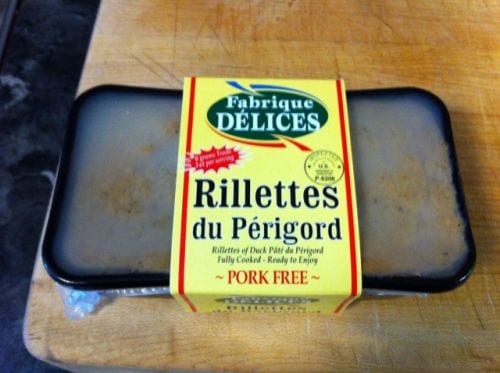 I love an ingredient list like this: duck meat, duck fat, duck stock, duck liver, corn starch (not that one), salt, black pepper, nutmeg, bay leaf, thyme. IOW: lottsa duck. It was chilled, so I let it get to room temperature. Chopped up onion, cornichon style pickles, then added bacon bits, a dusting of garlic powder, more black pepper, and a spluge of dijon mustard. 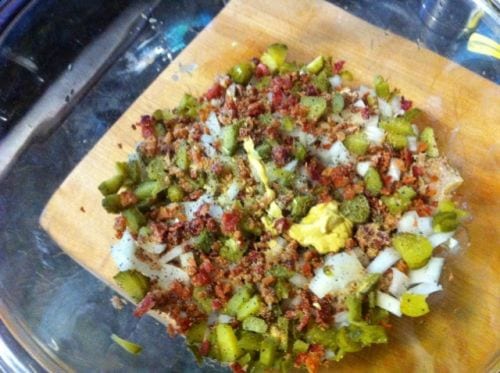 Well, it came out just like a tuna salad in terms of consistency. I mixed it all up and popped it in the fridge for a few hours in order for the flavors to release, then mixed it up again. 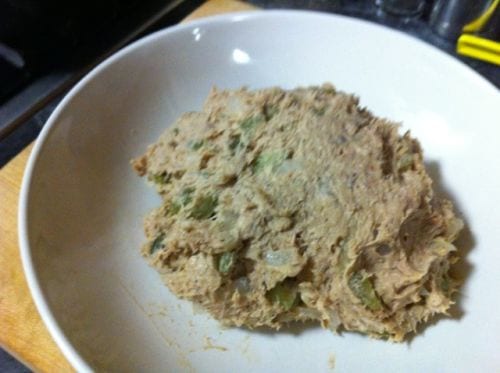 Well, it doesn’t taste like tuna salad but my oh my was it good! I determined we would have it for dinner, so I sliced up some Fat Bread, toasted the slices on the rack under the broiler, both sides, and cut them in half. A small green salad served alongside. 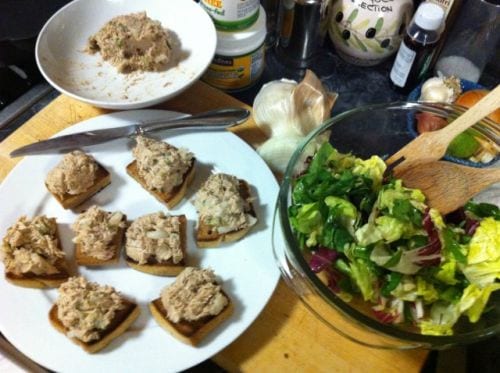 A back of the envelope calculation puts the caloric value somewhere around 1,500—the Fat Bread being so dense, and then all the fat in the “duck salad.” Bea and I were very satisfied. Stuffed, even. 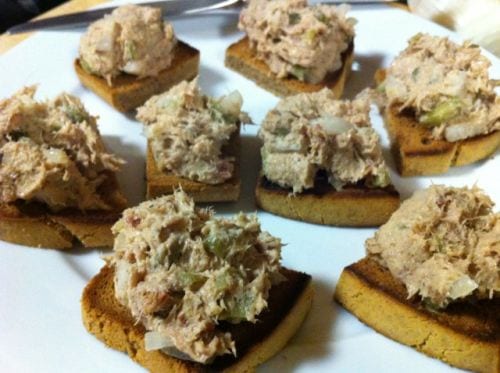 You’ll want to try this. It is pricey, however. That 7 oz container was about $12 at Whole Foods. I haven’t checked online.

In terms of fish rillettes, it already exists. Here’s a recipe for salmon that uses butter for the fat. And here’s one for tuna that uses butter and heavy cream. Another that uses olive oil—but of course everyone knows how to do that already. My grandmother had a recipe for a similar thing to spread on crackers using smoked salmon, cream cheese, and a few other ingredients I don’t recall. It’s quite rich, intended for small bites, so perhaps not the best thing for a sandwich.

At any rate, I’ll see if I can get hold of some duck fat and leaf lard and try both. I’m leery of trying butter, but perhaps a small test batch would be called for. Since I love bacon in tuna salad, trying bacon fat is a must as well.