Both my wife & I grew up eating a fair amount of liver & onions, often along with fried potatoes. It’s a big chore and a big mess. My mother’s method calls for everything to be fried in bacon fat, and you need a lot. If you don’t have enough, you have to fry up a lot of bacon.

Both the onions and the potatoes require a lot of time if you want the potatoes nicely browned and the onions beyond slimy worms. So it really requires three fry pans if you want things done at the same time. Enter spatters all over—it’s a big mess, a big production that takes quite a bit of time.

Enter the wok, a cookie sheet, and coconut oil. My interest in this is to give people easy options for getting liver into their diet if they can—the world’s most nutritious food, ounce for ounce. Toward that end, I’ve also put up two other completely different liver preparations, Smothered Beef Liver and Barbecued Beef Liver. I particularly like the former and I think offers the best chance at liver not tasting so much like liver, given the tomato sauce.

So this preparation takes about 30 minutes and there’s almost no mess. And, I think that the coconut oil instead of bacon drippings really balances things out wonderfully, surprisingly so. One other thing. Every time I do a post on liver preparations I get the folks who either eat it raw, or flash fry, with no flour dredge, etc. Knock yourselves out. I’m not interested in raw, though I would be intrigued to try a sushi-like preparation. I plain old like the flour dredge and the texture it affords. I use gluten free all-purpose flour (garbanzo & fava bean based). It’s a very small amount and if it helps someone include liver in their diet, I’m all for it—even if its plain old white flour. The benefit to liver outweighs puritanism. So here goes.

Now you’re ready to go. First step is to toss your onions into the coconut oil, enough so they are deep frying. 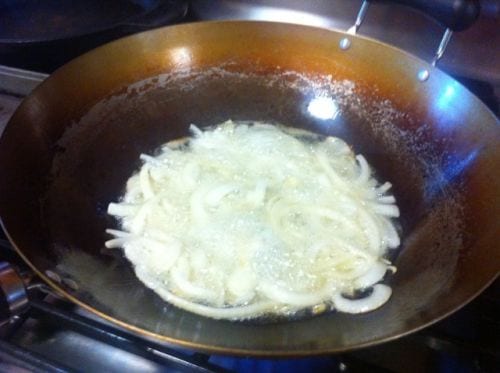 This is basically for the purpose of coating the onions in coconut oil, but I kept them in about 2 minutes to get them started. Then remove with a slotted tool of some sort onto the cookie sheet and really shake off as much fat as possible. Then do the same with the potatoes. 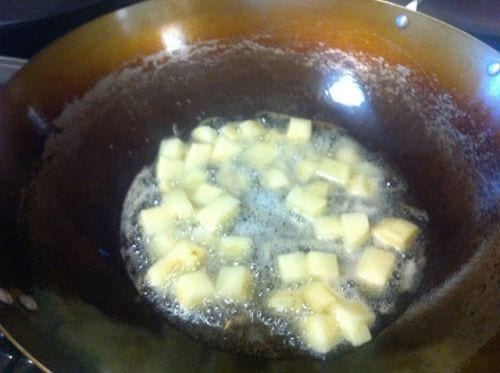 Just a couple of minutes, those go on the cookie sheet as well, and then it goes into the center rack for about 20 minutes, or until both are brown. I prefer some part of the onions to be toasty, blackened. Now wait. Turn down the flame on the coconut oil but keep it hot. At about 10-12 minutes, toss your potatoes and onions and place them back in the oven.

Turn the heat back up on the coconut oil to medium high, then individually dredge each slice of liver and put it immediately into the oil. Have enough oil so you’re basically deep frying them. This is why you use a wok. I turn them continuously in the oil and it takes only ~2 minutes per piece until the flour is browned. I let them drain on another plate on a paper towel. Note that because liver is so moist, you really need to dredge in the flour one by one and immediately into the oil, else your flour will become a gummy, yucky, clumped together mess (experience, here). 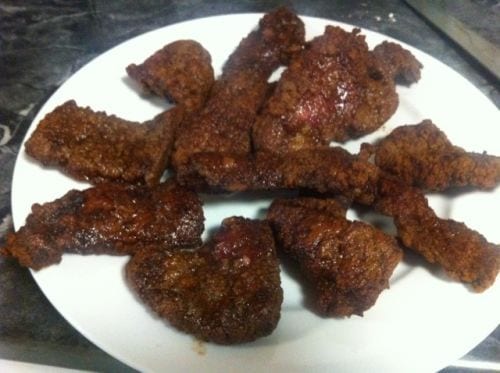 Liver on a plate

You should be done with the liver about the time your potatoes and onions are done and they should look something like this. 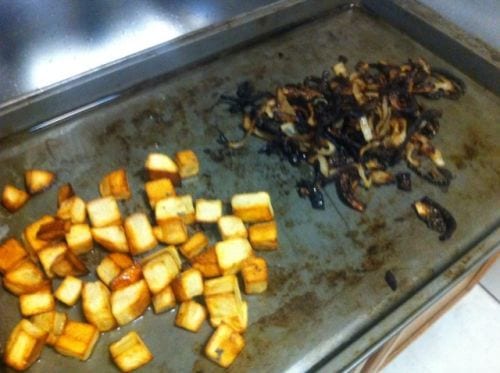 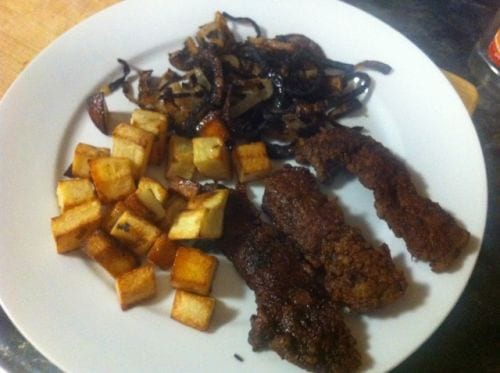 As another thing to try for those who like it or who are trying to acquire a taste, I very much like dijon mustard (Maille is preferred) as a condiment with the liver. Learned that in France where it’s quite common.