Well, it’s time to get that massive burger & small bun off the top of the blog, before any more Shiite Paleos get the vapors over it.

But yesterday I went to a market a few minutes from home and obtained fresh oysters from the beds up at Pt. Reyes, local. 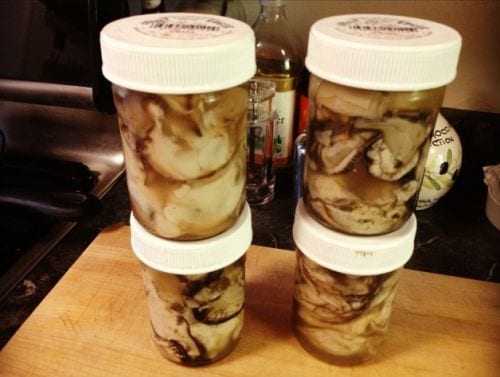 Oysters in their own “liquor”

Every now and then we do a family camping trip up in Olema, just a mile away from Pt. Reyes Station, and here’s how that goes in pictures, once we hit the oyster beds. I’ve had oyster stew a number of times but I wanted to do a soup, analogous to a lobster or crab bisque.

I found Alton Brown’s rendition. From much experience, you can’t go wrong with Alton, even if it’s just to get a few pointers for your own creation. He’s sciency, too.

Obviously, I have more than a pint, so I winged it in about 1 1/2 recipe proportion.

Pretty damn simple, but creates one hellava gawd awful mess in the kitchen. 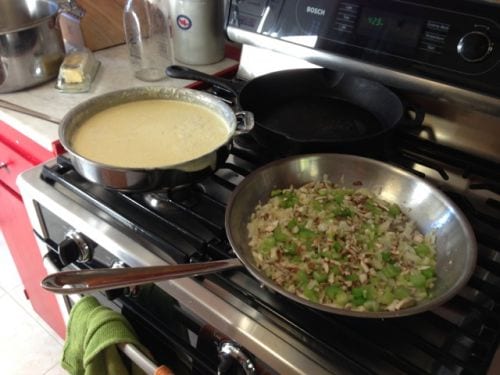 This is the point at which you’re heating up the heavy cream and liquor from the oysters (seriously, I have no idea why their juice is call liquor), and sautéing the onions and celery (along with the 4 chopped porcini mushrooms I added in my own style). 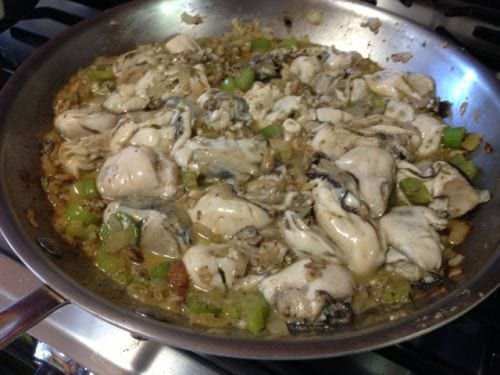 Then come the oysters, and then that whole thing goes into the processor or blender to be pureed, and yes, along with all the grit in the oysters (and in the oyster juice as well). Personally, I like my oysters on the half shell to not be drained. I like the grit—in clam chowder as well—which signals to me that is has not been processed to the lowest common idiot denominator.

Once that’s done, it goes in with the cream and juice, and a shot while later, is served. 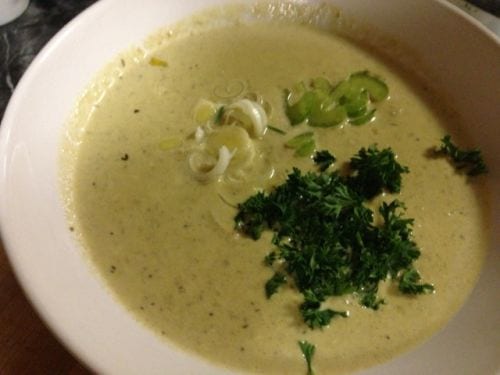 Another variation beyond the mushrooms is that I sliced up a small stock of leek and added that into the cooking portion. Then, for garnish, it was fresh leek, fresh celery and fresh parsley. 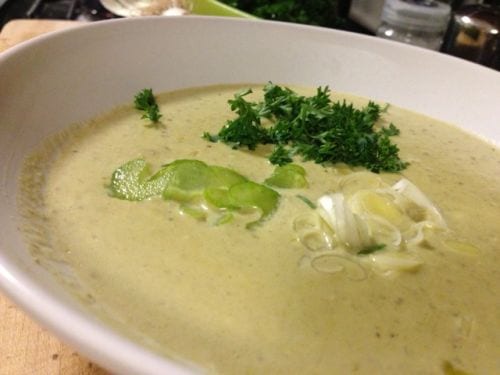 As always, all images can be clicker for higher-res versions.

In the end, I think I’ll primarily stick with fresh raw oysters on the half shell. It was good, but very, very heavy. Perhaps using half-&-half would have been a bit better, or, it’s just a small cup as an app prior to dinner. It just felt way too heavy and substantial to me, in the end, though very tasty.

I have a bottle of clam juice, so I intend to cut the leftovers with that when I have some this afternoon.

…Alright, if you’ll excuse me, I’ve got to go clean up ce bordel that used to be my kitchen. World Series got in the way. But wow. Giants have prevailed in six straight games, giving up only 4 runs in 54 innings. The last time there was a back-to-back shutout in the the WS was 1966, Baltimore against LA.