Got Milk? What’s so bad about milk?

I grew up drinking milk, we all tolerated it—loved it. Even had raw cow and goat milk for a long while. Made butter & cottage cheese now & then. For about three decades, now, I drink it almost never. A few times per year and I’ve gone years without drinking any.

I just got out of the habit, most likely from my five years in Japan where it was either not to be had or was some incomprehensible, sweetened & flavored abomination. No culture I can recall drinks milk as a beverage with a meal as Americans so commonly do, even into adulthood. But I dunno. I love ice cold, whole milk. I just don’t drink it often. When I do, it’s almost never with a meal, just as a beverage or, a “meal” in itself.

So after many months of none, I’m on a kick this week. Which is nice. There’s something about whole milk that just improves every marker for me in terms of feel good, well being, energy, satiation, and so on. Yea, milk isn’t Paleo—supposedly—but I wonder about something, too. It’s a complete food. It’s the exclusive nutrition not for just a mammal, but a growing mammal in its most critical stage of life—those first years. And: Exclusively! And so I wonder. Do you? Did you just hear “milk isn’t paleo” and said, “well, that’s that; the priests have spoken?” But is it “not paleo,” necessarily, because it’s unhealthy to drink if you tolerate the lactose, or something else in the evolutionary scheme?

I could go out and look up a complete comparative nutrition profile on cow, goat, or sheep milk…compared to human milk. What do you suspect I’ll find? Differences, but not a fuck of a lot. Probably similar macro ratios, give or take. Probably similar vitamins, minerals, and specific aminos that promote growth.

But here’s something you might not have thought of: milk is in liquid form and as such, is highly bioavailable. Everything is bioavailable. If you can handle the lactose, chances are it’s the most easily digestible food there is. It’s designed to be. Hell, it’s even designed to drink, and go right back to sleep.

As all familiar with the whole milk deal—by which I mean the whole deal and not whole milk—know, lactose intolerance is the norm; a natural mechanism to wean, and tolerance is a mutation about 8,000 years old that has quickly spread across the globe and marches on (because, milk is fucking nutritious and an excellent use of cattle).

So here’s my quandary. How is milk bad for you if you can tolerate the lactose? It was supposed to be your exclusive nutrition for your very first few years and now, it’s bad, awful, unhealthy? ….And we’re not even talking about exclusivity. 200-400 or more calories of milk per day is going to be bad for you!?

How about stop and consider the evolutionary purpose of weaning. Was it because milk is overnight a bad thing for you; or, rather, is it because the mother needs to get on and get ready to bear another offspring? Seems obvious to me.

Here in the Bay Area I’ve tried the raw milk from both Clarvale and Organic Pastures. I prefer the taste of the latter. Then I recently found this. 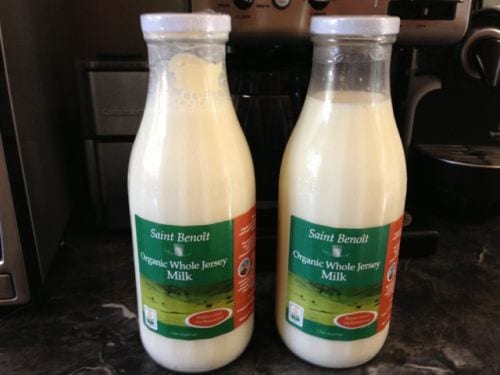 It is simply the best milk I have ever tasted. It’s 100% Jersey and as such, has 2 more grams of milkfat per 8 oz than the holstein milk from those other dairies.  Here’s the website. It’s pasteurized, but at the minimum 145 degrees. Not homogenized. You have to shake it and the cream mixes easily, just like the raw milks and unlike Strauss cream top.

It seems to me that if dairy is at all part of your nutrition, why deny yourself the tastiest part of it—if you like that sort of thing? Nope, not talking about exclusivity like when you were a little thing and not even necessarily as a regular thing. But now and then? A quart per day over a few days, then leave it alone? Something like that? For me, it’s hard to mistake the enhanced feelings of well being and energy with a few glasses of that per day.

Update: from the label per 8 oz serving (4.2 servings per liter glass bottle).