I’m Deleting More and More Comments on a Whim. Why? Success, That’s Why.

I don’t give a fuck about a lot of commenters on this blog. Those I care a lot about? Lots. Why? They understand their place, as I understand mine. They know who they are. …And Sean called me butthurt, once, so my love is still begrudged.

I don’t have it nearly as bad as so many who are not much more than troll bait, because everyone knows I’m happy to tell you to go fuck yourself in comments; here; just as anywhere else. Face-to-face, too…as I recently relayed in a comment. You want to meet face to face over a dispute? Ask. I’ll be there: Los Gatos / San Jose. I recently gave out my home address and cell number to a bunch of morons on r/paleo on Reddit (ask them). I put up. Proven. …I actually got a call within minutes and it ended very cool. I mean no one real harm, at all, or ever—quite the contrary—and it’s uproariously funny how that plays out in an actual face-face or phone call. I’m just not a little man pussy, like so many clamor to be.

…All the anonymous sock puppets, showing up here and there in increasing frequency? I just adore clicking “Delete.” Not banning them. In fact, I hope they post again, because then I get to sit there in my liesure and click (or, really, just touch on the iPad) “Delete.”

I mine minds. Yes. I’m a sometimes paleo blogger, food blogger, health blogger, social commentarial and everything I ever want to be doing in any moment, without fear or trepidation about what some fucking moron—or their collective of morons—is going to think about it. As I say: been at this for a long time. “Suck on it” (1st time I think I said that; overrated).

There are only a few million, maybe a few tens of millions of truly smart people in the entire world of billions. There are only a few thousand who have done the basic science and engineering—and overcome the billions of morons working against them—to give all the morons lots of shiny toys to be placated with, and to shut the fuck up so the smart people can go onto the next thing. Moron is the norm, perpetually relatively.

Then, there’s this: Someone willing to show his stuff, and who has never even been in comments, here.

Ive been lurking on your site since the beginning of the year (2012) after finding it linked from Martin Berkhan‘s site after I found his Lean Gains site.  I switched to real food and cut out all the processed crap and figured out the gas, bloating and explosive movements Ive had my entire life ceased.  Then I had some of those damn rolls at a steak house and before we left I made a visit and spackled their porcelain for them.  I guess at that point we had it figured out pretty well that I have a wheat allergy. Anyway I wound up on your site due to cholesterol research since my parents are both on drugs for high cholesterol.  I finally went to a doctor at my mother in-law‘s urging to get checked out a few months after changing my eating habits and all my numbers and my wife’s numbers came back great. The stories on your site have helped me feel better, and implementing eating real food has given a side effect of losing ~78 lbs over 10 months.

My wife and I escape to New Hampshire over the hot Florida summers, and it’s the best place I have ever been to eat natural whole food in my life. Every intersection of the state seems to have a farm stand, and there is local made sausage, vegetables and raw dairy within 20 minutes of our camp. We found the raw dairy just a couple of weeks ago, and holy shit if its not the best fucking milk I’ve ever had.  We drive by the cow barn on the way to the house to pick the milk and yogurt up, and the only thing we have seen going in is hay.  The rest of the farm is grass. They milk their 22 cows twice a day. Now I have to try and find this stuff down in florida, where raw milk will kill you and is for pet consumption only.

Attached is a shot of me in New Hampshire last year, and another shot from the same place a couple days ago.  I was ~285 last year in that shot, 220 in the shot from this year.

Thanks for the site and getting information out there for me to find. Without your site, Dr. Davis’ site and Berkhan’s site I’d probably still be 310 lbs like at the end of last year, feeling like shit and getting yelled at for noxious fumes emitted from my rear by my wife. 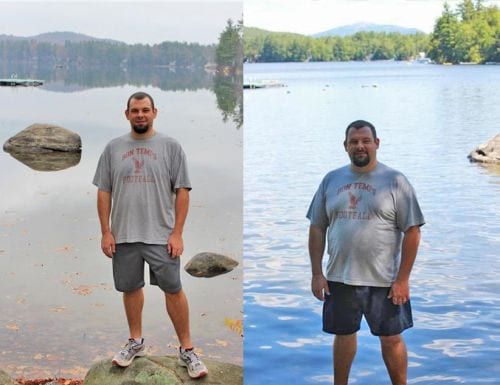 But this is impossible. I don’t have abs. Who in the world could possibly identify with my way of doing things?