Anarchy Begins at Home: The Blog Series Part 4 – Having One’s Cake and Eating It Too
The Evolution of Paleo: Free the Animal, Richard Nikoley and even the Sock Puppets

Underlying most arguments against the free market is a lack of belief in freedom itself. – Milton Friedman

Our faith in freedom does not rest on the foreseeable results in particular circumstances but on the belief that it will, on balance, release more forces for the good than for the bad. – Friedrich Hayek

I concluded Part 4 of this series with a quote by H. L. Mencken:

The whole aim of practical politics is to keep the populace alarmed—and hence clamorous to be led to safety—by menacing it with an endless series of hobgoblins, all of them imaginary.

In other words, when you watch the local and national news, read the newspapers, read books on current events, read nutritional studies, etc…what you are are most often confronted with is the specter of fear. Watch out! But, but: fear not! We’re looking out for you. 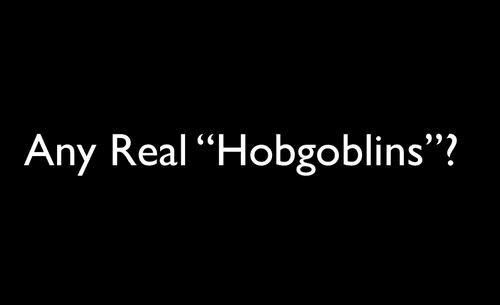 The essential question, however, is how does one discern a real hobgoblin from one that’s contrived? Or, perhaps it’s better to ask: why would hobgoblins be contrived in the first place? We can answer both questions. For the former, you need quality knowledge, i.e., the sort of down to Earth, reality-based knowledge our hominid ancestors relied upon to successfully evolve, migrate to all corners of the globe and spawn our pathetically incapable asses by comparison (save, a precious few). It’s both primitive and fundamental. It’s just plain observation of what’s around you and it’s very, very real. You can—and must—trust its validity. Your life depends upon it and reality in this context will never let you down. The only thing that will let you down is your own accuracy in interpretation, knowledge, experience. You don’t have the national weather service. You have you, and those others in your social sphere with experience in such real elements, if you’re lucky.

Hobgoblins are contrived because that’s what’s needed to keep you in fear. Moreover, you never really know, when the hobgoblin has passed you by, whether it was just by random chance, or that those “looking out for you” were effective. That’s always hit & miss, so what the Nomenclatura really need is hobgoblins in perpetuity. That way, it’s a never-ending war, and your devotion is needed to keep the forces of evil at bay and on the other side of the gates. 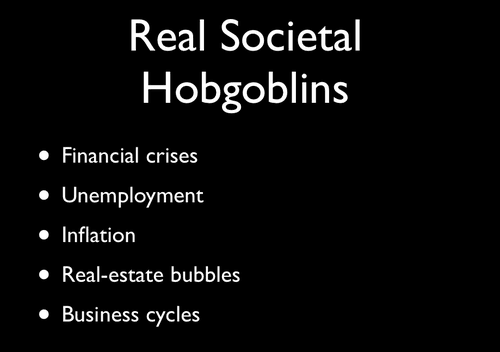 The norm in a presentation like this is to tell you that all of the foregoing is the result of government meddling in markets. The problem is, save for perhaps inflation of fiat currency, all these things are simply not the exclusive provence of government. Many examples, but the Tulip Bubble of the 1600s is apropos. I doubt the government had much to do with that wild-ass speculation even indirectly.

Statists will drop context and agree, and tell you that’s why you need a government overseer. The problem there, as free-marketeers might point out, is that such economic calamities happen anyway, with government. Both, however, agree they happen “beyond government,” ….else why would commies insist we need government? We’re human, stupid in astounding ways…we love, adore and protect and double-down on a losing streak far too easily. So the real difference is that that those who have supplanted the State for God simply can’t come to grips with the reality that both are utter bullshit and that you, individually—and humanity, collectively—are simply better off on your own.

Shit happens. Deal with it. 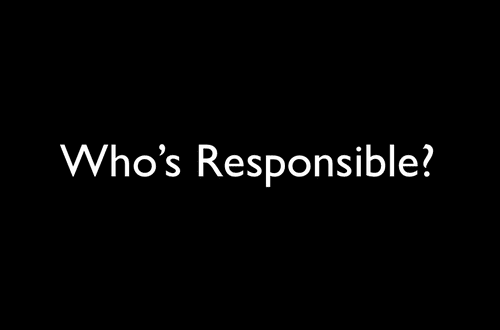 But we don’t. Nobody wants to deal with it. And whether it simply resolves itself over time—because everyone needs food, needs to get places, needs clothing and shelter every day—or whether some random State intervention is taken, one thing is for sure: blame will be assigned. The people always demand a “cause”—even if it’s over something that happened 14 billion years ago—and when it’s not obvious, you better make some “plausible” shit up if you wish to keep your status as an authority.

People are forever envious of greener grass. It probably began with thoughts of a sweeter bush…but I digress. 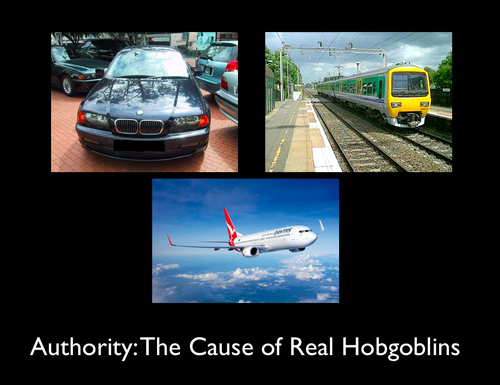 These, not the underlying false authorities

Bogus authority is the real cause of real hobgoblins because, simply: we evolved to rely upon our own individual minds, and you have given yours up. I cannot state it more simply. You suffer because of your own default. You defer to authority and nobody is really looking out for you. That leaves nobody…until such point as you realize someone really has to, and you’re the only one left.

Those who’ve managed to uphold their authority over you—or whether you were taught as a child to defer to all sorts of people who wear fancy silly hats—succeed because of your low quality of knowledge (Part 2). Angels & demons…heavenly & terrestrial. Here’s another one: you’ve been indoctrinated your entire life to bite the hand that feeds you. What you never took account of is that the same hand feeds those authorities. 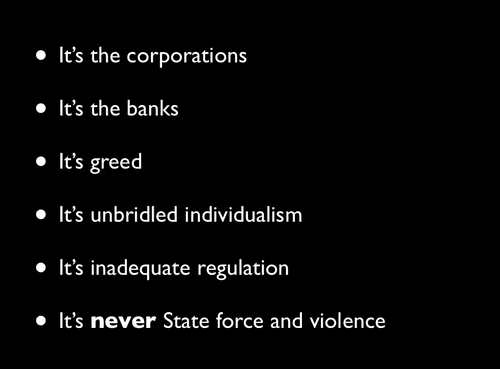 …One reason I consider this a valid endeavor for my paleo friends is that they—you—kinda have a leg up on most people and I do nothing if I don’t mine minds. It’s out of respect for you and not only that, but confidence in you over a long haul to come. …If not in principle or scientific rigor, they—Paleos—have accepted the logic of evolution (those not just posing or giving lip-service for expediency and market opportunity).

This is critically important and I have never, ever discounted the astounding realization that there now exists an increasingly popular and perhaps most effective dietary, fat loss, exercise, well being regime based largely upon a notion of the evolution of humans from hominids.

But, really, it’s always only just one mind at a time.

…Or, to state it in the context of this series: it’s incremental steps toward a higher quality of knowledge. Boring, but wholly necessary. You’ll never get anywhere good without it.

Or, you can loathe yourself in the classy light of a Manhattan Penthouse (once God & State get the lights turned back on).