It is forbidden to kill; therefore all murderers are punished unless they kill in large numbers and to the sound of trumpets. ― Voltaire

In the first 5 parts it was my aim to contrast quality of knowledge between peoples of the Paleolithic and moderns. It was further my aim to apply this to how a lower quality of knowledge in the Neolithic—owing to so much of it based on superstition, fantasy, delusion and what not—affords us the sorts of institutions you’d expect: the kind interested in keeping you in bread and circuses, dumb & happy, etc.

In this part it’s my aim to show you that the State is evil, per se. 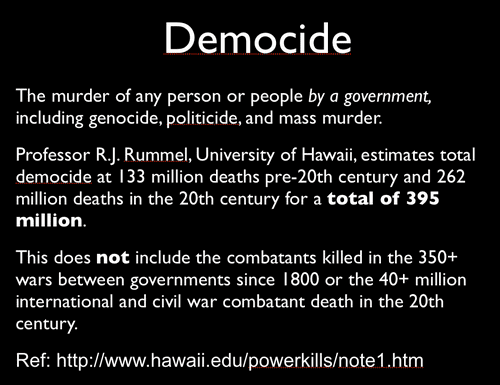 These figures do not include war dead. Here’s that link, clickable.

Excuse me when I hear the next person tell me how essential government is because there are natural born predators out there (who, incidentally, obviously don’t care about the law or ethics anyway). Drop in the bucket.

On the other hand, fair is fair. 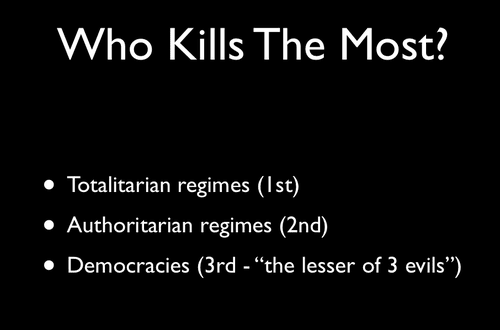 Yes, indeed. Democracies kill far fewer. Moreover, democracies don’t go to war against other democracies. This is improvement and there’s no doubt about that.

But why not do better still? My contention is not that a democratic State is not better on many levels than a totalitarian or authoritarian one, simply that’s it’s not nearly as good as could be done. But that’s a long term process, and it requires understanding how people change their minds. “You can’t reason a person out of a position he didn’t reason himself into” [Mark Twain, I think…].

Not part of the original presentation, but it’s instructive to listen to this video by Stefan Molyneux on the aftermath of the 2012 elections. I’m very much in league with him on how this sort of thinking comes about, multi-generational. Of particular note is the last half about how people do and don’t change their minds.

In the end, it all comes back to the quality of your knowledge of reality, what it’s based upon—really real things…or illusions, hopes, dreams, faith and good intentions?

One illusion is that we can’t always do better, that we’re locked into heaven or hell, depending upon your perspective.

Yep, democracy is a lesser evil. 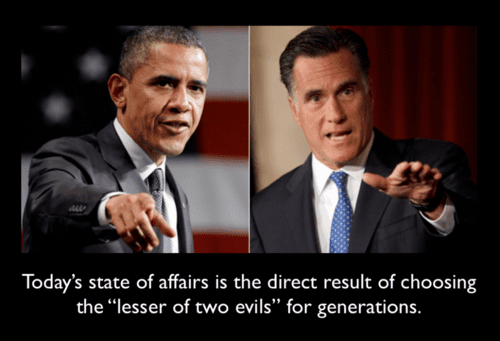 That’s basically half of the presentation. Next I move from the individual power of quality knowledge to contrast the quality of social power between the Paleolithic and the Neolithic.